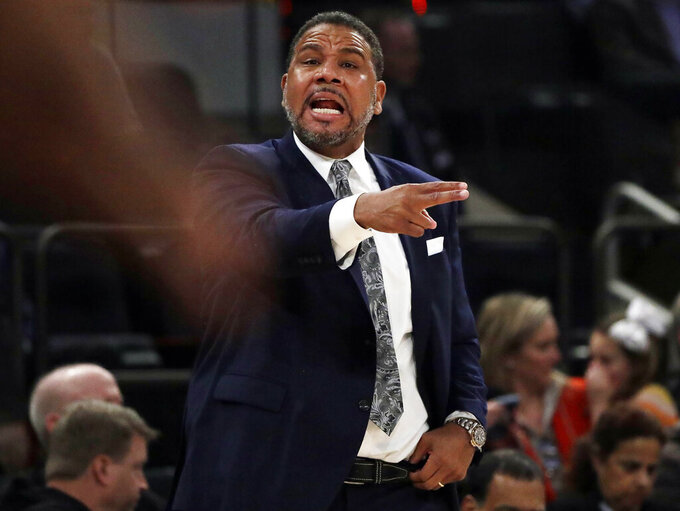 Providence head coach Ed Cooley calls out to his team during the first half of an NCAA college basketball game against Villanova at the Big East Conference tournament, Thursday, March 14, 2019, in New York. (AP Photo/Frank Franklin II) 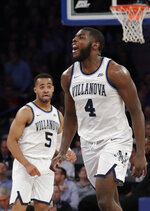 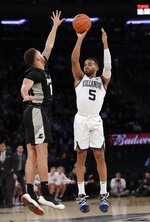 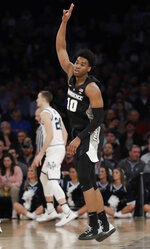 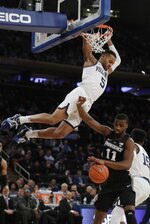 NEW YORK (AP) — With its chances of a third straight Big East Conference Tournament title on the line, the players who carried No. 25 Villanova most of the season stepped up and took control.

Eric Paschall had 20 points and 10 rebounds, Collin Gillespie hit two 3-pointers in a game-deciding 17-5 run and point guard Phil Booth was a steadying influence as the top-seeded Wildcats beat Providence 73-62 in the quarterfinals on Thursday.

"Coach tells us we have to lead by example, talk to our younger guys and just do all the little things — playing defense, rebounding, not worrying about if our shot's going in," Paschall said. "I just feel like our whole team has been doing that. Our whole team's had a great attitude, and we're taking a step in the right direction."

Gillespie added 19 points and six assists and Booth had 13 points as the top-seeded Wildcats (23-9) beat the Friars (18-15) for the third time this season.

The defending national champions will face fourth-seeded Xavier (18-14) in the semifinals Friday at Madison Square Garden. The Musketeers edged fifth-seeded Creighton 63-61 in the second quarterfinal.

Nate Watson had 15 points to lead Providence, which was playing its second game in 18 hours. Alpha Diallo and Isaiah Jackson added 14 apiece for the Friars.

Providence rallied from eight down to tie the game at 44 on a 3-point play by Diallo with 9:18 left.

Gillespie, who was 7 of 15 from the field, then took over. He hit a pair of 3-pointers in the big run while Paschall had a basket and 3-pointer. Providence drew to 63-58 on two free throws by Jackson but came no closer.

"He's the guy that really had the significant playing time last year, even though it wasn't a lot, but we count on him in some clutch situations," Villanova coach Jay Wright said of Gillespie. "Again, he's another guy who's a sophomore and kind of treating him like a senior. He's got to be a leader, and he's got a lot on his shoulders too. He's been awesome all year."

The opening 20 minutes was a series of runs. Providence took a 9-2 lead and the Wildcats responded with 15 straight points. The Friars came back and led 23-22, but Villanova closed the half with a 9-1 run that featured 3-point baskets by Gillespie, Cole Swider and a three-point play by Booth.

Providence is hoping to get in the NIT.

"If we get in, I'll be very excited. I hope we do," Providence coach Ed Cooley said. "If we're not, I'm going to be really proud of the guys and the effort that they had. But we left a lot of games on the table with our inconsistent approach in some of the games."

Providence: Will probably end up in NIT.

Villanova: Plays Xavier in semifinals Friday. The teams split in the regular season, with the Musketeers winning the second game 66-54.