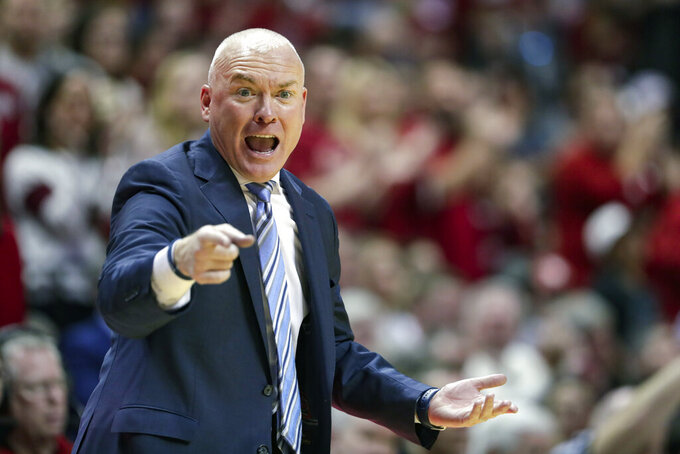 Chambers, 49, had been at Penn State for nine years and was coming off the team’s best season under his directions.

Penn State athletic director Sandy Barbour said during a press news conference that she would not disclose details of the school's investigation, but did say NCAA matters were not part of the investigation.

The investigation followed July story by ESPN's “The Undefeated” that quoted a former Penn State player saying Chambers made an insensitive remark to him, referencing a noose during the 2018-19 season.

“As difficult as this news may be, both President (Eric) Barron and I believe this is the right outcome,” Barbour said.

Assistant coach Jim Ferry was elevated to interim coach for the coming season. The start of the NCAA basketball season is slated for Nov. 25. Ferry has previously been head coach at Long Island University-Brooklyn and Duquesne.

Chambers was in the middle of a four-year contract with Penn State that runs through 2021-22 season. He was 148-150 with Penn State, including an NIT championship in 2018.

In a statement to the online sports network Stadium, Chambers said: “This has been an incredibly difficult year for me and my family, and we are in need of a break to re-set and chart our path forward."

Penn State finished 21-10 last season and was likely to earn an NCAA Tournament berth for the first time since 2011 before the postseason was canceled because of the pandemic.

“Coach Chambers has made many contributions to the program and to this university for which we are grateful,” Barbour said. “The team has been on a positive trajectory.”

Barbour said the players were “very disappointed” to find out about Chambers' departure. Chambers delivered the news.

“Our current players, many of them have good relationships with him,” Barbour said.

Bolton said that during a particularly difficult stretch for the team in January 2019, Chambers told him: “I want to loosen the noose that’s around your neck.”

Barbour said a new allegations surfaced shortly after the story and a review was conducted jointly by Penn State’s Affirmative Action and Athletics Integrity offices.

She said the final report was received within the last two weeks.