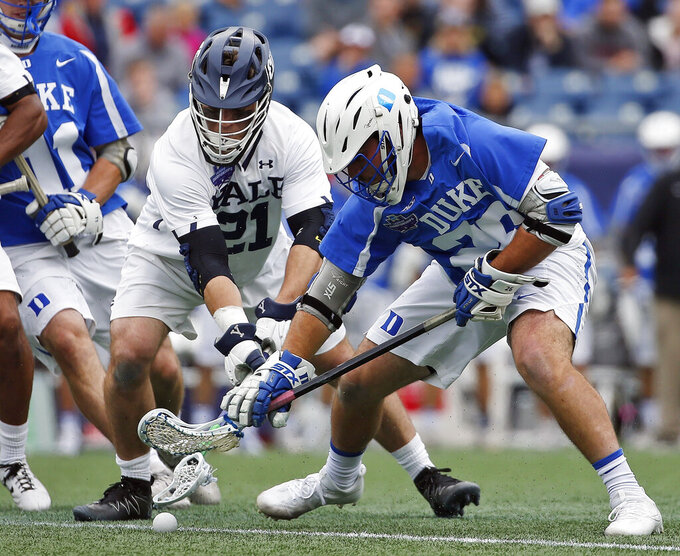 FILE - In this May 28, 2018, file photo, Yale's Conor Mackie (21) battles Duke's Brian Smyth, right, for the ball during the first half in the championship game of the NCAA college Division I lacrosse tournament in Foxborough, Mass. The men's lacrosse tournament which gets underway in earnest this weekend when Yale hosts Big East champion Georgetown in a first-round game on Saturday (AP Photo/Michael Dwyer, File)

Penn State lacrosse coach Jeff Tambroni has his Nittany Lions in rarefied air on the eve of the NCAA Tournament but in uncharted waters for a rising program.

The Nittany Lions (14-1) are the unanimous No. 1 ranked team and the top seed, yet they've never won a tournament game (0-4) and their conference, the Big Ten, was formed only four years ago.

Time to take the next step.

"We're trying to make a name for ourselves here as a lacrosse program, talk to our guys about what it takes to get over the hump," Tambroni said on ESPN's tournament selection show last Sunday night. "It's a one-step-at-a-time kind of a process here. We're excited to be in the conversation. It says a lot about this team."

Next up is a first-round home game on Sunday against UMBC. Like their basketball brethren who shocked top-seeded Virginia in the 2018 NCAA men's basketball tournament, these Retrievers (7-8) are a surprising bunch, too. They lost six of the first seven games of the season and barely qualified for the America East Conference Tournament, then beat Stony Brook and Vermont to win the title, and defeated Metro Atlantic Athletic Conference champion Marist 14-8 in Wednesday night's play-in game.

This was the first regular season with an 80-second shot clock and it's been good for the game, creating more offense and more saves while limiting stalling tactics. Penn State has thrived in that environment. The Nittany Lions lead the nation in scoring (17.33), scoring margin (7.07), man-up offense (.623), shooting percentage (.426), points per game (27.8) and assists per game (10.47). This isn't the same team that finished 8-6 last year.

"I think our senior leadership and maturity (are key)," Tambroni said. "I think you have to go through the ebbs and flows throughout the course of a number of seasons. Last year's experience, having to go through some injuries, having some big wins but some tough losses, really hardened this team through the course of the summer. They came back really focused."

Before leaving Cornell after a decade at the helm of the Big Red, Tambroni helped mold the careers of two Tewaaraton Award winners — Max Seibald (2009) and Rob Pannell (2013) — as the top players in the game. In his ninth season at Penn State, Tambroni has a pair of junior attackmen in the running for this year's award: Grant Ament, who leads the nation in points per game (7.21), and Mac O'Keefe, tops in goals (60).

"They share the ball. They're really a selfless group," said Tambroni, whose roster has 11 Pennsylvania-born players. "I honestly don't think anyone really cares about who's getting the credit."

For those who might doubt the Nittany Lions because of their postseason inexperience, Ament offers a word of caution.

"I don't think we've necessarily played our best lacrosse yet," said Ament, whose 78 assists this season are a national record. "We have yet to play a complete game."

Other things to know about the NCAA Division I men's lacrosse tournament:

Last season as a sophomore, TD Ierlan became a dominant faceoff force for the Albany Great Danes, setting an NCAA record for efficiency and helping Albany reach its first Final Four. He won a record 79.1 percent of his faceoffs, capturing a record 359 draws to go with a record 254 ground balls, an average of 13.37 per game.

But after Albany lost to eventual champion Yale in the national semifinals, Ierlan decided to transfer to Yale and hasn't skipped a beat. Ierlan is tops again in faceoff winning percentage (77.2) and ground balls (14.27).

"He's just an incredible weapon," Yale coach Andy Shay said Thursday. "We're excited to have him. I've never seen anything like it."

Penn State's lone loss was to Yale, 14-13 early in the season . Ierlan won 25 of 31 faceoffs and scored a goal to help the Bulldogs control possession time. His presence gives them a big edge as they chase a second straight title, something that's been on their collective mind since the start of the season.

"I think that's probably been a question we've been asking ourselves all year," Shay said. "Honestly, it's probably gotten in the way of us feeling good about a regular win. We're not worried about it. We're just going to try to win the next moment."

Penn has won 11 straight games after starting the season 0-3, and two of those victories were over Yale in an unblemished Ivy League regular season. Penn's 12-11 victory over the Bulldogs for the Ivy title gave the Quakers a sweep of the regular-season and tournament crowns for the first time in program history. The Ivy rivals would meet again in the quarterfinals if they win this weekend.

Army is making its first NCAA Tournament appearance since 2010 and has matched the program record for wins (12). The Black Knights are allowing 8.35 goals per game, second nationally, and senior goalie AJ Barretto has an 8.29 goals-against average, also second. Army beat Lehigh 11-7 for the Patriot League title after upsetting Loyola in the semis with defender Johnny Surdick (60 ground balls, 2 caused turnovers per game) holding Loyola star Patrick Spencer to one assist. Spencer, four-time conference offensive player of the year and considered by many the best player in the nation, ranks fourth nationally with 6.27 points per game.