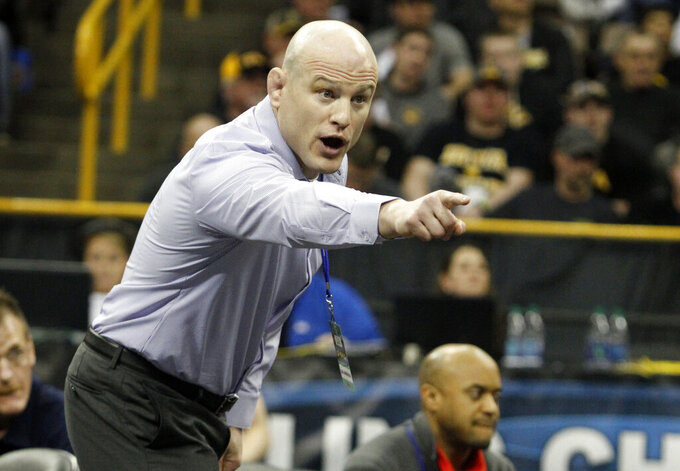 FILE - In this March 5, 2016, file photo, Penn State's Cael Sanderson yells during a 141 pound weight class match during the Big Ten Wrestling Championships in Iowa City, Iowa. Penn State is poised to send out another senior class as four-time national champions, and cement its status as the pre-eminent collegiate powerhouse of the past decade. (AP Photo/Matthew Holst, File)

PITTSBURGH (AP) — Penn State is poised to send out another senior class as four-time national champions and cement its status as the college powerhouse of the past decade.

The Nittany Lions (14-0) are the prohibitive favorites to claim the team title at this weekend's NCAA Championships for the eighth time in nine years and for the fourth year in a row.

They might be the most talented team that coach Cael Sanderson has assembled.

They'll compete in Pittsburgh, less than 150 miles away from State College.

Still, there should be plenty of fascinating individual battles throughout the three-day event, culminating with 10 championships matches on Saturday night.

Here are some of the story lines to follow during the national meet, which starts on Thursday.

Penn State seniors Jason Nolf (157 pounds) and Nickal (197) and junior Mark Hall (174) are all expected to return to Happy Valley with national titles. Nolf, a three-time All-American and two-time defending national champion, has been the second-most dominant wrestler in America this season. "I think Jason is special. You can tell just by the look in his eye. He's very confident. And the bigger the match, the better he wrestles," Sanderson said. The most dominant has been Nickal, a two-time NCAA champion who is 25-0 this season. Hall won it all as a freshman before falling to Arizona State's Zahid Valencia a year ago. Valencia is seeded third this weekend.

This is where things could get interesting. Penn State's Vincenzo Joseph ceded the top spot at 165 pounds after getting beat 9-3 by emerging Iowa star Alex Marinelli at the recent Big Ten championships. If those two can fight their way to a rematch, it might be the most anticipated match of the national tournament. Marinelli, a sophomore, is unbeaten this season. ...Shakur Rasheed is seeded behind Ohio State's Myles Martin at 184 pounds. Both are unbeaten, but Martin won the Big Ten title after Rasheed forfeited because of a knee injury he's been dealing with all season ...Oklahoma State's Derek White is the top seed at 285 pounds, ahead of Anthony Cassar of Penn State and Gable Steveson of Minnesota. Steveson, a freshman, was unbeaten before Cassar tripped him up in the conference tournament.

THE WEIGHT TO WATCH

There might not be a more competitive weight class in the entire meet than at 125 pounds. Northwestern's Sebastian Rivera is the top seed, but only Nickal and Nolf have been as dominant as Virginia's Jack Mueller, who is seeded fifth. Oklahoma State's Nicholas Piccininni heads into the NCAA meet unbeaten and seeded second, with Iowa sophomore Spencer Lee listed at third. Lee, who won it all as a freshman, will be seeking revenge after getting beat by both Rivera and Piccininni this season.

Oklahoma State's Daton Fix (133 pounds) joins teammate White as a No. 1 seed. The Cowboys have six top-10 seeds. ...Cornell will be seeking its 11th straight top-10 team finish. The Big Red will be led by Yianni Diakomihalis, the defending champion and the top-ranked wrestler at 141 pounds. ...Anthony Ashnault (149 pounds) is the first wrestler in school history to earn a No. 1 seed for the NCAA Tournament.