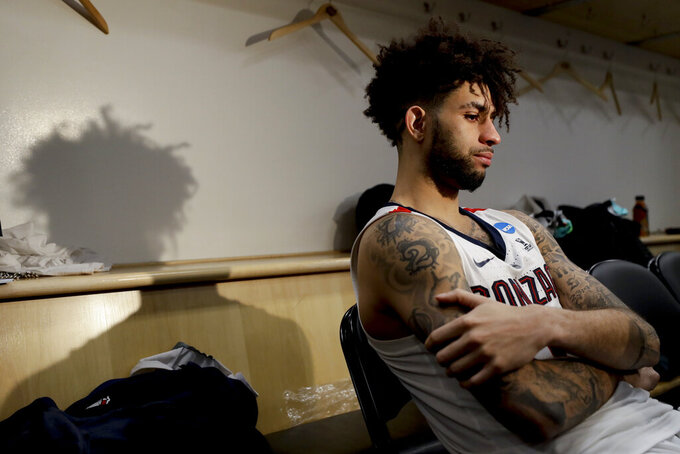 ANAHEIM, Calif. (AP) — Josh Perkins has accomplished so much over five years at Gonzaga, but a self-described "bonehead play" in his final game is something he will always regret.

Top-seeded Gonzaga came up a short of the Final Four on Saturday, losing 75-69 to Texas Tech in the West Regional final. Perkins' mistake in the waning seconds helped seal it for the third-seeded Red Raiders.

A layup by Zach Norvell got Gonzaga within 71-69 with 11 seconds left. The Bulldogs applied full-court pressure on the inbound pass, but he reached over the end line and made contact with Matt Mooney as he was throwing in the ball. The result was a technical foul that all but ended the game.

"He was ball faking a lot and I thought he ball faked in front of me and instinctively reached in," Perkins said. "Bonehead play. Something I will think about forever. Unfortunately that happened."

Davide Moretti made both free throws and Texas Tech maintained possession. Jarrett Culver was fouled and made a pair of free throws to put it out of reach.

The Bulldogs were down 69-62 with 55 seconds left, but forced two Red Raiders turnovers on consecutive possessions to get within 69-67. Perkins — who scored 16 points and had six assists in 38 minutes — made his fourth 3-pointer with 22 seconds remaining to bring Gonzaga within a basket. After Mooney made a pair of free throws, Norvell had a layup off a Corey Kispert missed 3-pointer to make it a two-point game again.

That would be as close as Gonzaga would get though.

Norvell and Kispert both said that the game did not come down to Perkins' technical. Norvell, who scored 12 points, didn't deny though that it ended up being the biggest play of the game.

"He was just being aggressive and there's no fault there for that," Kispert said.

Perkins leaves Gonzaga as the school's assist leader and part of a team that made the Final Four in 2017. Brandon Clarke, who had 18 points and 12 rebounds, said he would miss playing with Perkins.

"I came here to play with a guy that's like Josh, really, to play with a point guard that I knew we would have a connection that he is deeper than I've ever had before with a teammate, playing on the court with him is basically something I've dreamed about," he said.

"We can write a book on Perk and Perk and I," Few said. "He's hung in there, been kind of a lightning rod over the years because our program garners so much attention and he's handled it with grace. If you went and asked those guys in the room they would hands down say he is the best teammate they ever had."

Few could have another formidable squad next year, but a lot depends on what transpires over the next couple months. Clarke and Rui Hachimura are juniors who would be selected in the first round of the NBA draft if they leave early. Hachimura — who had a game-high 22 points — is projected as possible top-five selection.

Hachimura said he would discuss his options with the coaching staff and his family, but was more eager to analyze what went wrong on Saturday.

"We had to be aggressive the whole game. They were handsy with the ball and guarding inside pretty good," he said. "They were a great defensive team. We just didn't score the last couple minutes."