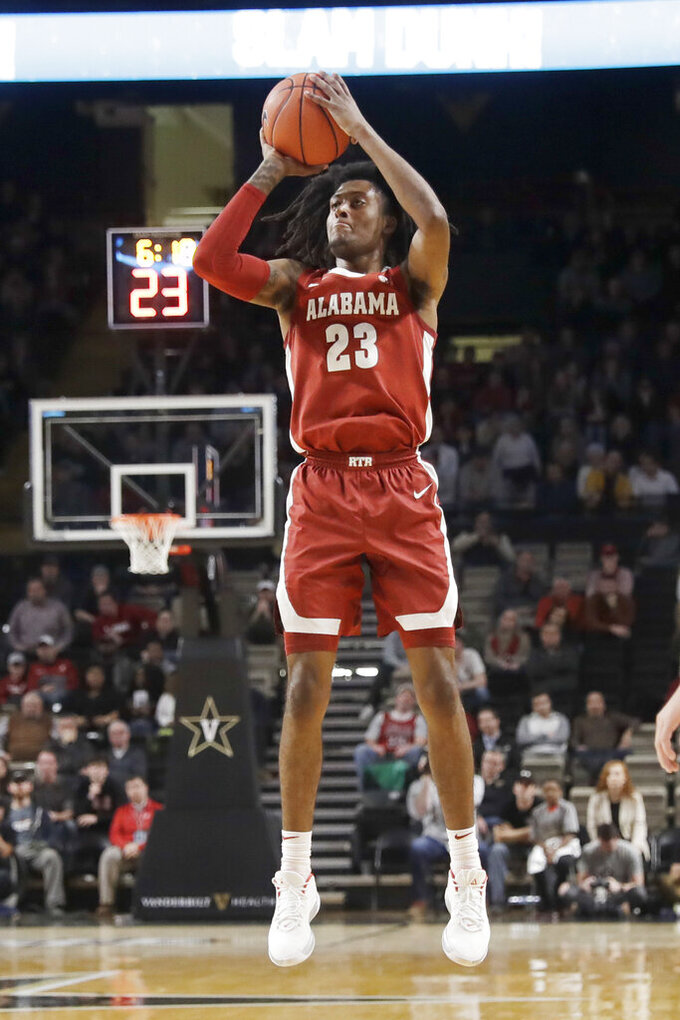 FILE - In this Jan. 22, 2020, file photo, Alabama guard John Petty Jr. shoots against Vanderbilt during the first half of an NCAA college basketball game in Nashville, Tenn. Petty, one of the Southeastern Conference's top 3-point shooters, and Jaden Shackelford return after averaging 15 and 14.5 points, respectively. (AP Photo/Mark Humphrey, File)

Nate Oats brought points galore in his first season at Alabama with his up-tempo coaching style. Now, he's hoping the defense — and wins — will follow.

Led by now-departed p oint guard Kira Lewis Jr., the Crimson Tide was nearly as generous as it was prolific last season. The result: some shootout wins — and losses.

“Our offense was good enough for us to compete at the top of the SEC last year,” Oats said. “Our defense was lacking by a large margin. We’ve got to get the defense fixed. We’ve got to establish that mind-set right out of the gate.”

They'll have to do that without the high-scoring Lewis, a potential high NBA draft pick who turned pro after two seasons.

Even with Lewis and one of the nation's highest scoring teams, Alabama finished 16-15 and ninth in the Southeastern Conference. The Tide's 82 points and 10.8 3-pointers made per game both ranked third nationally.

On the flipside, the team also allowed an average of 79 points, which was 333rd out of 350 teams.

Points shouldn't be hard to come by again. Guard John Petty Jr., one of the SEC's top 3-point shooters, and Jaden Shackelford return after averaging 15 and 14.5 points, respectively. Fellow starters Alex Reese and Herbert Jones are also back but the team will rely heavy on freshmen and transfers after signing the No. 12-rated class, according to the 247Sports.com composite rankings.

Plus, point guard Jahvon Quinerly is a former 5-star recruit who sat out last season after transferring from Villanova. Yale graduate transfer Jordan Bruner, a 6-foot-10, 210-pounder, is another key addition and should be a big help on the boards.

The first-team All-Ivy League Conference player averaged 10.9 points and 9.2 rebounds last season. Bruner was a coveted target for Bama because of how he appears to fit in Oats' system.

Quinerly has big shoes to fill in replacing Lewis, who replaced 2018 NBA lottery pick Collin Sexton. The Alabama native signed with Villanova out of high school, playing sparingly before transferring and having to sit out last season.

“I know there’s a rich history of point guards in this program and a lot of good guards that came before me,” said Quinerly, whose brother Jaden joined the team as a preferred walk-on. “I’m really just trying to continue that tradition but doing it by doing what the coaches want me to do and doing the little things.”

Alabama got a big boost when Petty opted to return in early August after testing the NBA waters. He averaged a team-leading 6.6 rebounds while making 84 3-pointers. Petty said one incentive to come back was he thought the Tide had the potential to go “real far” in the NCAA Tournament.

Even with the loss of Tchikou, the Tide has plenty of room for contributions from the signees. Junior college transfer guard Keon Ellis is another shooter who also could boost the defensive efforts. Guard Joshua Primo, one of two Canadian signees, could play multiple positions in the backcourt, including running the point.

Alabama’s nine-game nonconference schedule features a home game against Houston on Dec. 19 and a road trip to Oklahoma (Jan. 30).

“There’s not one easy game on the schedule, which is good,” Oats said. “If they reduce your schedule let’s make sure they’re all quality games, they’re going to make us better and get us ready for SEC play.”