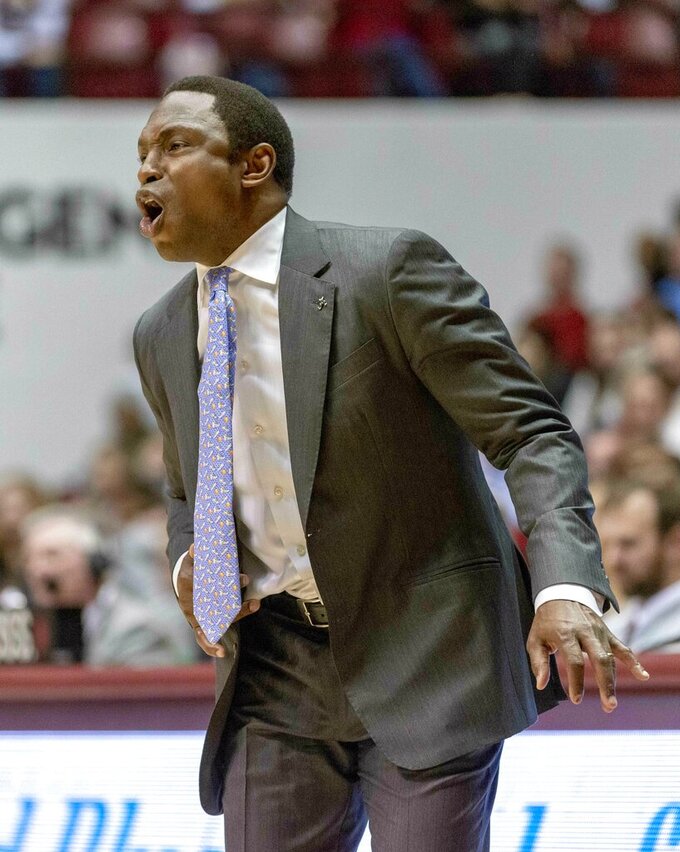 Alabama head coach Avery Johnson reacts to his team's play against Mississippi during the first half of an NCAA college basketball game, Tuesday, Jan. 22, 2019, in Tuscaloosa, Ala. (AP Photo/Vasha Hunt) 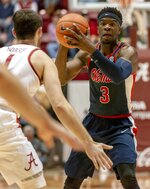 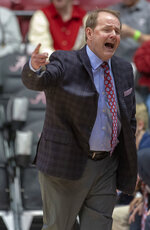 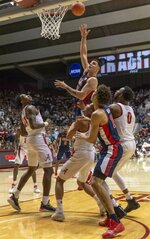 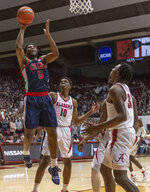 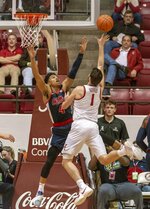 TUSCALOOSA, Ala. (AP) — Alabama has a reputation of losing large first-half leads. Against No. 20 Mississippi, Alabama's lead didn't just hold up, it grew.

The Crimson Tide built a 16-point lead by halftime and extended that advantage to 28 points on the way to a 74-53 blowout win over Ole Miss.

The first-half lead was built on a mixture of defense, scoring 15 points off nine Ole Miss turnovers, and rebounding, as the Crimson Tide pulled down seven more rebounds than the Rebels.

The rebounding difference came from Alabama's offense, as it collected nine offensive boards to the Rebels' two.

The Crimson Tide kept the lead by working inside-out. Donta Hall scored seven of his 11 points in just 10 minutes, while Galin Smith added six of his 10. They combined for nine of Alabama's 20 offensive rebounds, a season high.

The duo of Terence Davis and Breein Tyree had dominated for the Rebels this season, combining for 33 points a game. Alabama denied them open looks while Ole Miss was on offense and didn't allow them to rest on defense, going straight at them.

Davis, who had averaged 16.2 points a game, was the Ole Miss player to score in double digits, finishing with 10. He picked up a technical with 1:07 left in the first half and fouled out with 16:05 left in the game.

"So immature," Davis said. "I'm just not used to player technicals, so that's why I just left him in to foul out. . Guy has been in the league for four years and to act that way. We all got exactly what we deserved tonight."

No. 20 Ole Miss entered Coleman Coliseum off a 17-point win against Arkansas, but a blowout loss against Alabama, and the Rebels will likely fall out of the rankings.

Alabama struggled to hit free throws at Tennessee on Saturday, making eight of the 18 attempts (44 percent). Tuesday night, the team shot 17 of 22 (77 percent) from the line.

PLAY OF THE GAME:

Avery Johnson Jr. drove to the baseline, floating the ball off the backboard. Donta Hall followed the ball and threw down a two-handed dunk, giving Alabama a nine-point lead midway through the first half.

Donta Hall finished with 11 points and 10 rebounds for his 10th double-double of the season. It was his fourth straight double-double, an Alabama record.

Ole Miss: For the first time in their six conference games, the Rebels didn't have a big first half, scoring just 26 points. Their previous first-half low against conference opponents was 31.

Alabama: After letting several big leads slip away throughout the season, the Crimson Tide proved they could hang on to a large first-half advantage. They also proved they could make free throws when it mattered.