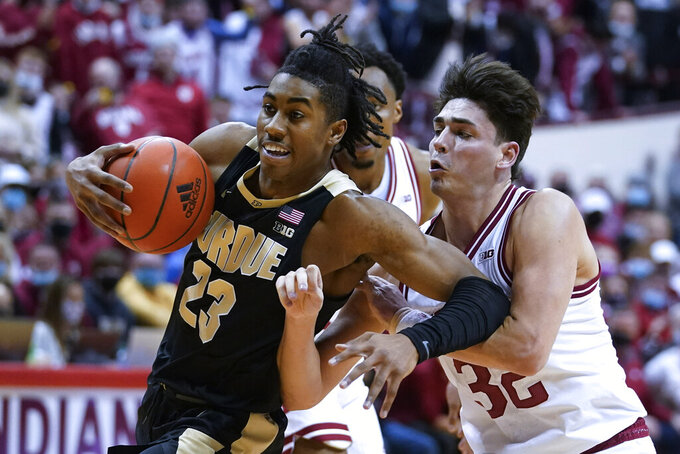 Purdue's Jaden Ivey (23) is defended by Indiana's Trey Galloway (32) and another Indiana player during the first half of an NCAA college basketball game Thursday, Jan. 20, 2022, in Bloomington, Ind. (Darron Cummings)

BLOOMINGTON, Ind. (AP) — Rob Phinisee spent four seasons waiting for a moment like the one he celebrated Thursday night.

It even took him two chances to cash in.

The junior guard scored 17 points in the first half and then closed out a career-high 20-point game by making the go-ahead 3-pointer with 16.5 seconds left to send Indiana past No. 4 Purdue 68-65 for Phinisee's first win over his hometown school.

“Every time I go home, people always talk trash to me. I just finally needed to get one," Phinisee said. “It's just something I won’t ever forget. Just these fans, they’ve supported me through everything, so I just want to say thank you."

Phinisee was sensational on a night when the Hooisers (14-4, 5-3 Big Ten) desperately needed him. He made his first six shots, his first three 3s, had four steals and had a season-high point total — all in the first half.

As a result, the Hoosiers snapped a nine-game losing streak against their biggest rival, and thousands of screaming fans stormed the court when Ivey's 3-pointer to force overtime rolled out as the buzzer sounded.

“I had confidence on the one I took, the one I took where it was kind of contested,” Ivey said. “I tried to get it high off the glass so the bigs could get a tip-in. My leg was bothering me all game, even before the game I didn’t know if I could really play because of my groin. It just sucks losing.”

Ivey scored 19 of his 21 points in the second half but missed a go-ahead shot with seven seconds left and the 3-pointer at the buzzer after Jackson-Davis made two free throws to make it a three-point game. Mason Gillis had 13 points and seven rebounds for the Boilermakers (15-3, 4-3), who lost for the first time in their last six trips to Assembly Hall.

Twice the Boilermakers had chances to take the lead and failed before Gillis' layup with 1:08 to play gave Purdue its first lead of the second half.

After Phinisee missed a potential go-ahead 3 following one timeout, first-year Indiana coach Mike Woodson opted for an inbounds play he added earlier in the day and again Phinisee got open. This time, he made it from the corner.

“Rob and I had a beautiful conversation hours before the ballgame and it's just nice to see how he stepped up,” Woodson said. “It’s a big win for our team. It’s been a while since we beat Purdue."

Purdue: Coach Matt Painter has criticized his team's defense most of this season and against Indiana, it finally hurt the Boilermakers. Indiana made 10 of its final 17 shots in the first half and Purdue gave up open shots down the stretch. Ten first-half turnovers by the Boilermakers didn't help, especially on the road.

Indiana: The Hoosiers showed their resilience after struggling early with Jackson-Davis on the bench. Woodson has asked his bench to perform better lately and Phinisee delivered in a pinch. Now comes the big question: Can Indiana build from the momentum of this victory?

Purdue took advantage of two wins last week — and a bevy of upsets — to return to the top five. It may be a short stay. After escaping with an overtime win Monday at Illinois, the Boilermakers underperformed Thursday. How far they slide may depend on how impressive they look this weekend.

Indiana, meanwhile, has been fighting to reach the Top 25 all season. If the Hoosiers follow this win with another on Sunday, they could finally make it into the rankings.