Pinson leads Missouri to 83-79 win over Arkansas in OT 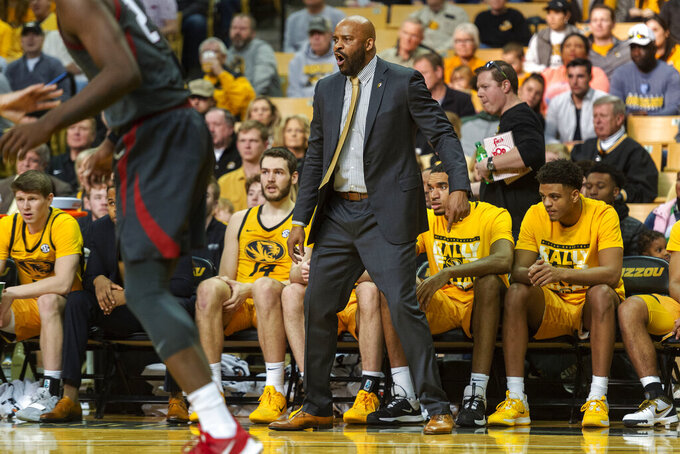 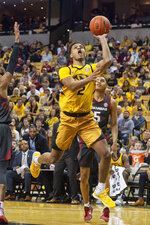 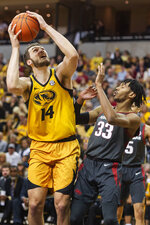 Plan A for Xavier Pinson was to drive the ball to the basket. That was the only plan Pinson needed as he scored a career-high 24 points to lead Missouri to an 83-79 overtime victory over Arkansas on Saturday.

“If they stopped it, I guess I would have tried Plan B,” he said.

Pinson repeatedly drew contact and made his way to the free-throw line, where he hit 12 of 13 foul shots. Actually both teams spent most of the day at the line, combining for 83 free throws, but the Tigers (11-12, 3-7 Southeastern Conference) had Pinson on their side in overtime. He scored seven points in the extra period.

“It’s having that killer mentality — I would say Mamba mentality — not being scared of anybody or anything,” Pinson said of his mind-set.

Javon Pickett scored 14 points, Reed Nikko added 11 points and 11 rebounds and Dru Smith finished with 11 points and four steals for the Tigers. Missouri piled up a 52-35 edge in rebounds.

“You’re not going to win a game where you put an opponent on the foul line 44 times,” Arkansas coach Eric Musselman said. “We could have played the Milwaukee Bucks tonight and we wouldn’t have fouled them 44 times. We’ve got to learn to defend without fouling, and it starts with being in a defensive stance.”

Missouri led 36-30 at halftime. The Razorbacks took the lead with six minutes left in the second half as Whitt began driving to the basket at will. He made 3 of 4 free throws and a short bank shot on three straight possessions.

The game went back-and-forth for the rest of regulation. It swung to Missouri early in overtime when Jones fouled out on a charge and then Pinson drove to the basket for a layup, drew a foul and hit the free throw on the other end to give the Tigers a 73-69 lead.

“I’m happy he had 24 points, but I’m not surprised,” Missouri coach Cuonzo Martin said of Pinson. “He just did what he was supposed to do.”

Missouri freshman forward Tray Jackson made a case for more playing time by scoring nine points on 4-of-5 shooting. In one key sequence late in regulation, he blocked a shot and then sprinted to other end and followed a missed shot with a dunk to give the Tigers the lead.

“The thing that will make Tray Jackson a great basketball player is he doesn’t have a lot flowing through his ears,” Martin said. “There’s not a lot of people giving him advice. That will make him great. I think he’s a talented player. He’s athletic, strong, all those things. When you don’t see him out there, the biggest reason outside of growth and understanding is he has to improve his conditioning.”

On a team that’s starved for offense, Jackson has shown the ability to get to the basket and score, but he has averaged less than eight minutes a game and didn’t play at all in four games.

“Of course you want to show coaches you can do things, but that’s not my mind-set when I step out there,” Jackson said. “It’s more of doing whatever I can to help my guys win.”

The well-travelled Whitt played his second college game in his hometown. As a freshman at Arkansas, he scored 15 points against Missouri in 2016. Then he transferred to SMU. He returned to Arkansas this season as a graduate transfer and again scored 15 against the Tigers.

Whitt has been battling a sore back and didn’t score in the previous game against Auburn. He averages 14.7 points.

“He’s a stabilizer for us,” Musselman said. “He’s a good defender. He can score for us. He’s just a unique player because he plays that point guard position but scores so well around the rim and midrange.”

Missouri: It was the fifth-annual Rally for Rhyan game at Mizzou Arena. The game honors Rhyan Loos, the daughter of former Missouri assistant coach and current athletic administrator Brad Loos, and raises money for pediatric cancer research. Rhyan has been cancer-free for more than three years. Missouri is 5-0 in Rally for Rhyan games.

Arkansas: The Razorbacks entered the day projected as a No. 9 seed in the latest mock NCAA Tournament bracket by ESPN’s Joe Lunardi, but they have been trending the wrong way. Arkansas has lost five of its last seven. If the Razorbacks don’t make the tournament, they might look back with regret on consecutive overtime losses to Auburn and Missouri.

Arkansas: The Razorbacks play at Tennessee on Tuesday.