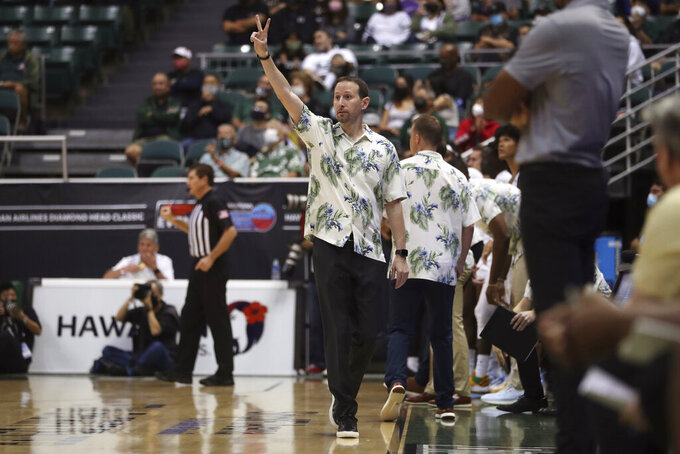 Hawaii head coach Eran Ganot signals to his team as they take on Vanderbilt in the second half of an NCAA college basketball game Wednesday, Dec. 22, 2021, in Honolulu. (AP Photo/Marco Garcia)

HONOLULU (AP) — Scotty Pippen Jr. scored 21 points and Vanderbilt turned back Hawaii 68-54 in the nightcap of the Diamond Head Classic on Wednesday night.

Pippen missed all four of his 3-point tries, but hit 8 of 12 shots from inside the arc and 5 of 6 free throws for the Commodores (7-4), who are making their first appearance in the tournament. Shane Dezonie added 10 points off the bench, while Quentin Millora-Brown finished with nine points and nine rebounds.

Noel Coleman scored a career-high 31 points for the Rainbow Warriors (4-4), who had not played since they sank a school-record 18 3-pointers in an 88-52 win over Hawaii Pacific on Dec. 8. Junior Madot scored 10 points and Jerome Desrosiers had eight points and seven rebounds.

Pippen scored 13 points in the first half to help Vanderbilt take a 35-24 lead into intermission. Coleman's layup pulled the Rainbow Warriors within 52-47 with 7:14 left to play, but Dezonie nailed a 3-pointer and Jordan Wright sank four free throws in a 7-0 run and Vanderbilt led 58-47 with 5:28 remaining. The lead never dropped below double digits from there.

The Commodores scored 23 points off 21 Hawaii turnovers. The two schools last played in 1990. Vanderbilt is 3-0 all-time in the series.