Pitino takes over at New Mexico, looks to revitalize Lobos 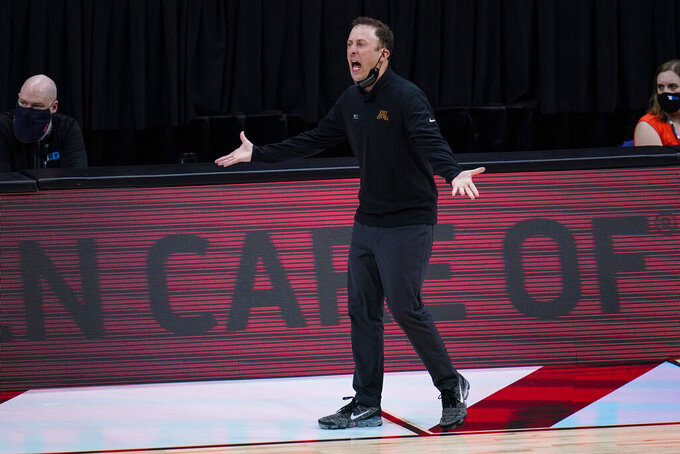 Minnesota head coach Richard Pitino questions a call as his team played against Ohio State in the first half of an NCAA college basketball game at the Big Ten Conference tournament in Indianapolis, Thursday, March 11, 2021. (AP Photo/Michael Conroy)

ALBUQUERQUE, N.M. (AP) — Richard Pitino is barely taking over at New Mexico and he's already fielding a challenge for his Lobos.

The would-be opponent is Iona, the program coached by Pitino's father, Rick.

“When I got the job, I got a text right away, ‘How about we play an Iona-New Mexico game in Las Vegas,’” Richard Pitino said Thursday as he was introduced as New Mexico's new coach. “I said, ‘How about you leave me alone,’ is what I said. ‘Why don’t you prepare for the NCAA Tournament.’ But that is certainly something we’d love to do.”

Richard Pitino was hired Tuesday just hours after Minnesota finalized his firing following eight seasons with the Gophers. He faces the challenge in Albuquerque of revitalizing a program with a rich history that struggled in recent years under Paul Weir, who went 58-63 in four seasons for the Lobos.

“The magic has happened there before and we want to bring that magic back again,” he said.

He said he wants to get the city and the state buzzing about college basketball again. “We have to fill the Pit," Pitino said. "We have to get these fans back and we have to get unbelievable opponents in this building. So I’m always open to that. I won’t shy away from that.”

The Lobos didn't play a single home game this season because of health orders related to the pandemic. For the majority of the season, the team was even prevented from practicing in New Mexico, forcing it to spend weeks in hotels, practicing wherever anybody had an open gym. By the end, the program was playing with six scholarship players.

“It’s very important for me to get to know our players,” Pitino said. “They’ve been through a lot. This season they had was a lot to ask of college student-athletes. I want to learn their story and tell them my vision.”