Pitt pulls away from Robert Morris 71-57 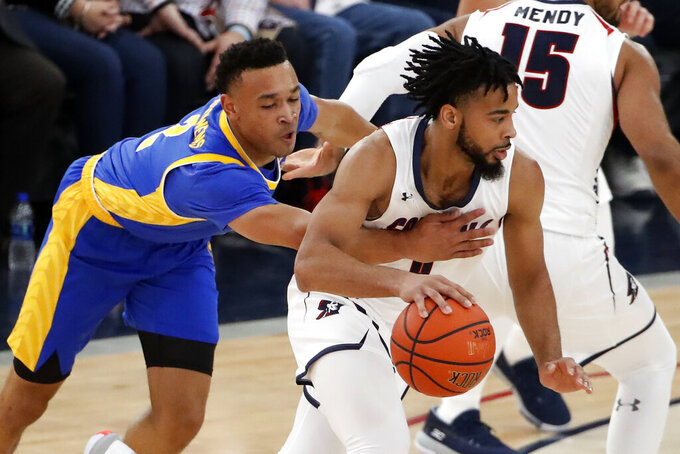 MOON TOWNSHIP, Pa. (AP) — A double-digit deficit on the road. A capacity crowd in full throat. Pittsburgh has been there plenty over last two-plus years. And faltered each and every time.

For once, the Panthers pushed back, a small sign of growth for a program hoping to take another step toward respectability in head coach Jeff Capel's second season.

The Colonials (0-3) used an 18-0 run in the first half to take an 11-point lead. Six-plus years after upsetting defending national champion Kentucky in a National Invitational Tournament game at the since-demolished Sewall Center, Robert Morris again staggered a Power Five conference team.

The Panthers, however, recovered behind McGowens' relentlessness and the 6-foot-10 Brown's dominance in the lane as Pitt earned its first true road victory since beating Boston College on Feb. 8, 2017.

"When they made their run, it was loud, we could have folded," Capel said. "We have to understand the importance of each day. We are not a program and we don't have the type of talent where you can just show up."

A lesson the Panthers learned painfully against Nicholls State, a game in which Pitt led for just 35 seconds against a team picked to finish 11th in the Southland Conference. The Colonials, perennial contenders in the Northeastern Conference under coach Andy Toole, represented a bit of a step up in class. Throw in the debut of their new $45 million, 4,000-seat gym — a building that's a testament to both the program Toole has built and the rapid expansion at the school of more than 5,000 students located 20 miles west of Pitt's Oakland campus — and Robert Morris had all the intangibles required to beat the Panthers for the first time in 31 meetings.

The Colonials just didn't have the tools necessary to slow down McGowens or overcome Brown's size.

"Terrell Brown was really the difference in the game," Toole said. "His ability to protect the rim, and make it hard for our guys to finish around the basket had a huge impact on us offensively."

Josh Williams led Robert Morris with 12 points, Jalen Hawkins added 11 off the bench and Yannis Mendy had 10 points and six rebounds, but the Colonials — who didn't have a player over 6-feet-8 — couldn't keep pace over the final 20 minutes. Pitt, which scrambled back from the early hole to tie it at halftime, opened the second half with a 22-10 surge that broke it open.

The Panthers outrebounded Robert Morris 39-27, dominated Robert Morris in second-chance points (14-2) and kept the Colonials off the free throw line. Robert Morris didn't even attempt a free throw in the second half and finished with just six for the game. McGowens, by comparison, made 8 of 10 at the line after getting to the stripe just nine times total over his first two games.

"I was just letting it come to me," McGowens said.

Toole hopes the response to the debut of the Colonials' glittering new venue — particularly from a raucous student section — is a sign of things to come. Robert Morris has averaged 20 wins a season over the last 12 years but all that success didn't necessarily translate to a rowdy atmosphere at the Sewall Center. He thinks that can change going forward.

"I think this could become a great home court for us if we can get the campus and community support that I think these guys deserve," Toole said. "It was a fun environment for them to come and cheer and be connected as a university community. I think that's something to build upon. There's a great source of pride being able to be in this building finally."

Pitt: The Panthers need to find some sort of identity on offense if they're going to take another step forward in coach Jeff Capel's second season. Through three games, Pitt has relied heavily on McGowens and Xavier Johnson getting to the basket. When they're either finishing at the rim or getting fouled, the Panthers are competitive. When they're not — as they weren't against Nicholls State — Pitt will struggle to generate offense.

Robert Morris: The Colonials will have a chance to make some noise in the NEC. Picked to finish fifth, Robert Morris should be plenty battle-tested thanks to a nonconference schedule that includes games against Marquette and UNLV before league play begins.

Pitt: Faces longtime rival West Virginia for the 129th time on Friday when the Mountaineers visit the Petersen Events Center.

Robert Morris: Plays Howard on Friday night in Toledo, Ohio as part of the Men Against Breast Cancer Invitational.