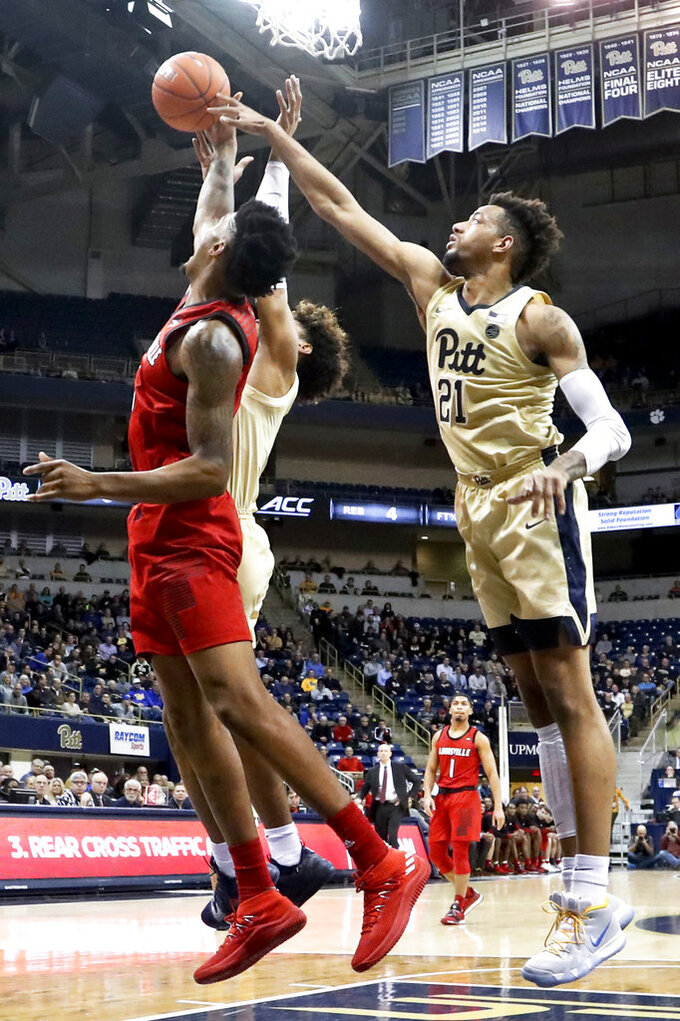 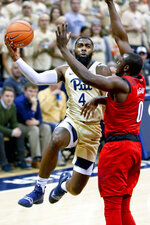 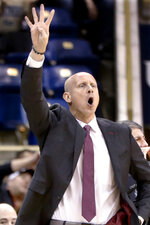 PITTSBURGH (AP) — Jeff Capel could see it in the faces of his players as the Pittsburgh Panthers surrounded their first-year coach before overtime started on Wednesday night against Louisville. A once seemingly comfortable 13-point lead gone and momentum fully tilted toward the Cardinals, Capel sensed dejection and even worse, doubt.

A chance at ending a long ACC losing streak that the majority of the roster didn't contribute to but nonetheless shouldered slipping away, Capel offered his young team a reminder. Loudly.

"I got on them," Capel said. "I told them we're going to win. Five more minutes."

Then the Panthers did something they hadn't done in 690 days, long before Capel or most of the players in uniform arrived on campus. They responded. Emphatically.

"It just tells you that we're a good team," Johnson said. "We never stop playing. We always fight. No matter if it's 45 minutes or 40 minutes."

Pitt snapped a 23-game losing streak in ACC regular season play dating back to a win over Florida State on Feb. 18, 2017 when Steven Enoch's hurried 3-point point attempt at the buzzer smacked off the backboard as the Petersen Events Center roared. The Panthers spilled onto the court in a mixture of celebration and relief.

"Last year we had a rough year," said Pitt center Terrell Brown, one of the few holdovers from the group that went 0-19 in the league in 2017-18. "(Now) we got our first win in our second game. It opens the door for everything else."

Johnson shook off early foul trouble to score 17 after the break, including a 3-pointer early in the extra session to answer a 3-pointer by Louisville's Ryan McMahon.

"Just relaxed," Johnson said. "I knew something was going to happen."

Still, the Cardinals had a chance. Louisville missed six shots over the last 90 seconds as its 12-game winning streak over the Panthers ended with a clang. Christen Cunningham led the Cardinals (10-5, 1-1) with 23 points and Enoch chipped in 14 points and seven rebounds, but leading scorer Jordan Nwora finished with just eight points on 2-of-14 shooting and Louisville couldn't seem to keep the explosive Panthers in check.

"The backcourt for Pitt was phenomenal," Louisville coach Chris Mack said. "It's hard to believe those kids should be high school seniors. They're freshmen now, and they had their way with us."

Mack added his team's defense was "deplorable." The Panthers shot 52 percent (32 of 61) from the field, including 61 percent (16 of 26) in the second half to offset a miserable 16 of 33 performance at the foul line that nearly cost them the game.

Dwayne Sutton hit a runner with 26 seconds left to go in regulation to cap a 17-4 run and draw Louisville even for the first time since midway through the first half. Capel opted not to call timeout, but the Panthers were unable to get a shot off in the final seconds of regulation as McGowens lost the handle just before time expired.

No matter, Pitt survived thanks in part to a defense that forced 18 turnovers and the growing confidence of McGowens and Johnson. The two signed with the Panthers days apart last spring and arrived on campus intent on turning the program around.

The Panthers were outclassed during a 25-point loss to North Carolina last Saturday in Capel's ACC debut, one that offered a glimpse of the long road that lies ahead. Still, he reiterated his team is headed in the right direction, and the Panthers proved it against a school in the middle of a rebuilding process of its own.

Louisville rallied from a halftime deficit to surge past Miami in Mack's conference opener but the Cardinals struggled to get into any rhythm against the Panthers. Louisville trailed by as much 16 and led for less than 5 minutes, compared to more than 34 minutes Pitt.

"Bad night for our team," Mack said. "I thought Jeff's guys were a lot harder playing than our team. I thought maybe the whipping they took over the weekend fueled them. They came out, played a lot harder than we did."

Louisville: Defense could be an issue all season for the Cardinals, who allowed the Panthers — particularly Johnson and McGowens — to get in the lane whenever they wanted. Even a switch to a 1-3-1 zone in the first half failed to slow Pitt's momentum.

Pitt: Freed from the weight of a losing streak that the majority of the roster had no part of, the Panthers could be a threat against middle-tier ACC teams thanks to the confidence and athleticism of Johnson and McGowens.

Louisville: Travels to No. 12 North Carolina on Saturday.