Players hear 'a lot of talk' from Emmert about Title IX, NIL 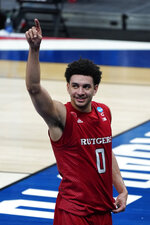 A trio of men's basketball players asked NCAA President Mark Emmert during a video call Thursday to abide by, and enforce, Title IX gender equity rules and to create a waiver that would let college athletes start earning money from use of their names, images and likenesses this year.

What did the three students say they heard in return?

“A lot of talk,” according to Iowa’s Jordan Bohannon.

Another player involved, Rutgers’ Geo Baker, said Emmert repeatedly referred to waiting for Congress to intervene and summed up the session this way: “What it really sounded like was that the NCAA doesn’t really want to be the first to make action.”

“We brought up a lot of our points, and it’s kind of like he would say the same thing and kind of agree with us. But that really wasn’t going anywhere,” Michigan’s Isaiah Livers said. “And obviously, from what I hear, he likes to kind of talk about points instead of make action.”

Emmert's take: “We had a really good, really constructive conversation,” he said during an availability later Thursday, “and I look forward to continuing to work with them and others.”

In coordination with the National College Players Association, the athletes used a social media campaign — with the Twitter hashtag #NotNCAAProperty — during March Madness to protest rules that deny NIL rights and to put a spotlight on differences between the men's and women's basketball tournaments wrapping up this weekend in Indiana and Texas.

“Let this be the last NCAA tournament designed to treat women’s basketball players as inferior to men’s basketball players. Let this be the last NCAA tournament that generates a billion dollars from the talents of predominately black basketball players who aren’t allowed to make one dime off their own name," Ramogi Huma, executive director of the National College Players Association, said on a call with reporters after the three players spoke with Emmert and, in a separate video meeting, Sens. Cory Booker and Richard Blumenthal.

"This is why we’re all here today — to call for an end to the economic, racial and sex-based discrimination NCAA sports imposes on college athletes,” Huma said.

Title IX says schools that receive federal funding must provide equal opportunities to men and women. But even if the trio that met with Emmert knows the rules do not specifically apply to NCAA action, they think its principles should be followed by the group that oversees college sports, especially in light of the issues in recent weeks at the two tournaments, such as different weight rooms and arena logos.

“It wasn’t a mistake. It was almost like it was clearly done that they didn’t want to put as much effort (into) the women’s that they did for the men’s,” Bohannon said. “So us requesting that is further hopefully understanding in the future that this situation will never happen again.”

In addition to the Title IX and NIL topics, Emmert was asked to give players more of a voice in the process, including in front of the Division I Council and Board of Governors.

Huma said miscommunication led to there not being any female athletes present for the video meeting with Emmert, who said: “We need to do the same thing with women’s athletes, by the way. Obviously, I haven’t talked to any athletes on the women’s side but want to do that as soon as possible.”

There were women's basketball players who spoke to the media along with Bohannon, Baker and Livers. They said they were upset about the much-discussed differences between the two basketball tournaments. They also wanted to look forward and make the case for how NIL rights can help college athletes.

“I’m here just because I’m not sure that anything will change by the time I leave here,” Michigan junior forward Naz Hillmon said, “but I hope to see some change.”

The blanket waiver would permit players to seek NIL endorsement deals as soon as July, before any full action comes on Capitol Hill, where there is legislation pending.

And Emmert's response on that?

“Basically he said he’s going to get back to us. There wasn’t a direct answer. That was one of the times where he kept talking about Congress, you know? Needing help from Congress. What can Congress do first?” Baker said. “And then he basically said, ‘Well, if Congress doesn’t do anything, then we can discuss the other possibilities, like a blanket waiver.’ Kind of going around the question a little bit, basically just saying he’ll get back to us about it.”