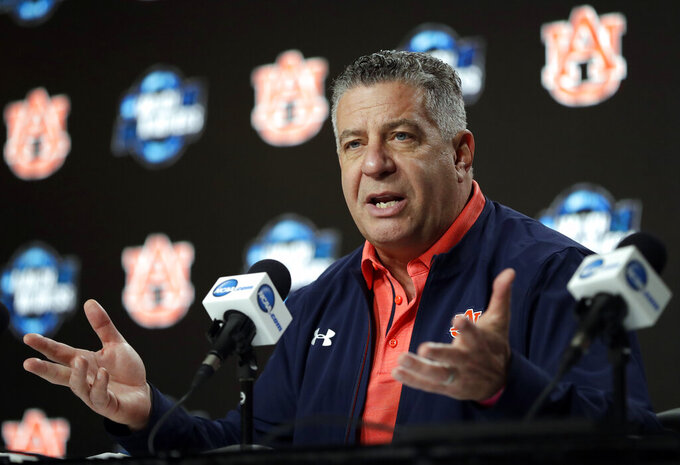 KANSAS CITY, Mo. (AP) — The last four teams standing in the Midwest Region are a celebration of everything that is good about college basketball: star players, over-achievers, tradition-rich programs and successful coaches.

They also exemplify everything wrong with the game.

Top-seeded North Carolina survived unscathed one of the worst academic fraud scandals in NCAA history. Their opponent in the first semifinal at Sprint Center on Friday night is No. 5 seed Auburn, where ex-assistant Chuck Person was ensnared in the FBI probe into college basketball corruption.

In the other semifinal, second-seeded Kentucky and coach John Calipari — who has had wins vacated at both Massachusetts and Memphis — takes on No. 3 seed Houston, whose coach Kelvin Sampson was hammered with a five-year show-cause penalty after a myriad of recruiting violations at Indiana.

No wonder so many critics think the game is in the gutter.

"There are some things that are wrong with it, things that take place that are inappropriate," acknowledged Pearl, who was hit with a three-year, show-cause penalty of his own after lying to the NCAA about recruiting violations during his time at Tennessee.

Pearl doesn't hide from his past. Nor is he naive enough to think major problems no longer exist.

He does ask this question, though: "What do you want to focus on?"

That's because there also are plenty of positives in Kansas City.

The Tar Heels (29-6) are the nation's third-highest scoring team, relying on a mixture of one-and-done stars and been-there, done-that vets. They race up and down the floor at a breakneck pace, one that caused fits for mighty Duke and helped them win a share of the regular-season ACC title.

"It's the way we've always played," North Carolina coach Roy Williams said. "When I played 100 years ago, I loved playing that way. I think fans the like it. The only thing left is coaches, and I don't think the game was designed for my enjoyment."

If the Tigers (28-9) slow down Carolina, they might topple another of college basketball's premier programs. Auburn already dusted off Kansas to reach the Sweet 16 for only the fifth time in its history, and it has been 33 years since its only trip to the Elite Eight.

As usual, the Wildcats (29-6) have no shortage of star power with bruising Stanford transfer Reid Travis, sharpshooters Keldon Johnson and Tyler Herro, and leading scorer P.J. Washington. He's been out with a sprained left foot but could return this weekend.

Houston (33-3) might not have the same name recognition — though Corey Davis Jr. is a legitimate star — but has lived up to expectations in blowout wins over Georgia State and Ohio State.

Indeed, there is a lot to love on the court in Kansas City. Plenty to forget off it, too.

INJURY UPDATES: North Carolina guard Kenny Williams (hamstring) said he'll be ready for the Tigers, but forward Nassir Little (flu) is questionable after missing practice all week. Meanwhile, the Wildcats hope to get back one of the nation's premier players in Washington from his foot injury.

3-POINT FRENZY: Led by Bryce Brown, Auburn has made 421 3-pointers this season, the fourth-most in Division I history. But this is no mere chuck-it-up bunch: Brown also knocks 'em down at a 40 percent clip, and the Tigers were 13 of 30 from the arc in their second-round win over Kansas.

"They shoot a lot of 3s. They make a lot of 3s," said the Tar Heels' Cameron Johnson, the sixth-best shooter in the nation from beyond the arc. "We're going to have to pay attention to that."

STILL AS SWEET: It took Sampson five years to get Houston to the Sweet 16, and that means it's been 16 years since his last trip with Oklahoma. There was a stint between as an NBA assistant, but Sampson also admitted: "It's hard to make this tournament."

"You look at all the great programs that haven't made it the last two years or four years or five, it's because it's not easy," Sampson said. "It's a grind."

FOLLOW THE LEADER: Many veterans would balk at joining a young team, but Travis said that was one of the biggest draws about Kentucky. The fifth-year senior could take the lessons learned in four years with the Cardinal and pass them along to his teammates.

"I thought it would be nice to have a younger team and have some leadership presence," said Travis, who has likewise improved his own draft stock in Lexington.

PHI SLAMA JAMA: The last time the Cougars made the Sweet 16 was 1984, when they reached the second of back-to-back championship games. Those were the days of Clyde Drexler, Hakeem Olajuwon and the rest of Phi Slama Jama, many of whom frequent Houston games these days.

"We respect all of the tradition and history that our program has," the Cougars' Armoni Brooks said, "so hopefully being able to live up to that is one of our main goals."