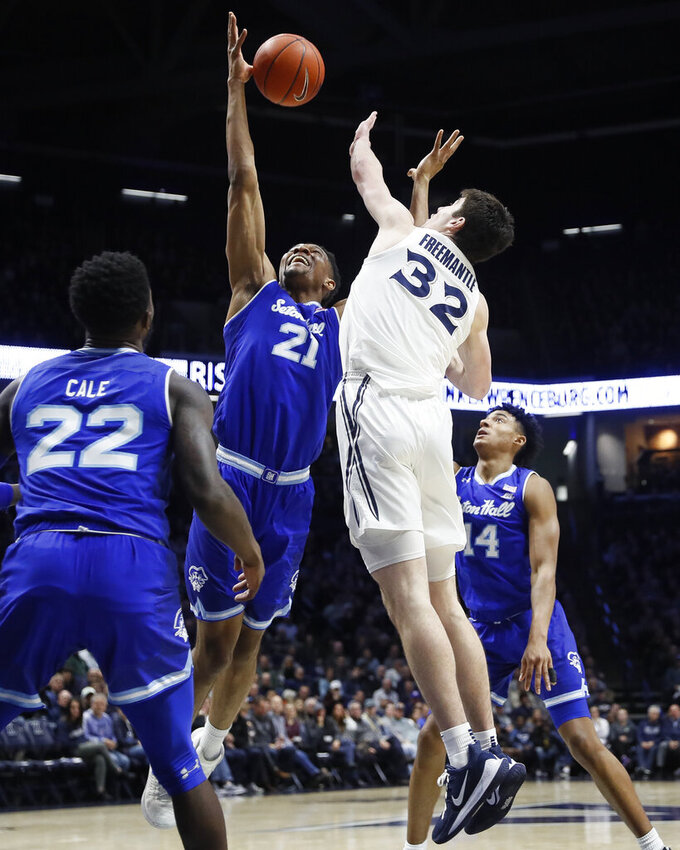 Seton Hall's Ike Obiagu (21) and Xavier's Zach Freemantle (32) battle for a rebound during the first half of an NCAA college basketball game, Wednesday, Jan. 8, 2020, in Cincinnati. (AP Photo/John Minchillo)

The Pirates (11-4, 3-0) won their fifth in a row — their best streak of the season — and joined Providence atop the league at 3-0. Two of the Pirates' wins have come on the road.

Powell helped the Pirates pull ahead by 14 points in the first half and hold on. In his third game back from a concussion, Powell went 10 of 21 from the field and added a team-high nine rebounds.

Xavier (12-4, 1-2) couldn't get anything consistently on offense with Seton Hall's big front line misdirecting shots. Leading scorer Naji Marshall was limited to a pair of free throws in the first half and finished 3 of 10 from the field.

In his last three games, Powell has scored 66 points while leading the Pirates on their surge to the top.

Powell hit a 3-pointer, a fadeway jumper and a pair of layups during a 21-5 run that put the Pirates up 30-17. The Musketeers missed seven consecutive shots and had five turnovers during the spurt.

The Pirates led 40-32 at halftime, the most points Xavier has allowed in an opening half this season. Seton Hall's pair of 7-foot-2 centers took away Xavier's drives to the basket — Ike Obiagu blocked three shots and Romaro Gill finished with five blocks.

Marshall made a 3 for his first basket, cutting the lead to 51-45, but Powell scored off a pair of drives to the basket as Seton Hall stretched the lead to 16 points midway through the second half.

Xavier made a late surge. Marshall made three free throws, and Quinten Goodin had a dunk off a turnover that cut the lead to 75-71 with 1:55 left. Gill had a dunk, a steal, a pair of free throws and a block as Seton Hall closed it out.

Seton Hall: The Pirates were on the cusp of the Top 25 to start the week and embellished their credentials with a second straight win on Xavier's court. They also won at the Cintas Center last season, 80-70.

Xavier: The Musketeers fell to 1-1 in a streak of three straight Big East home games, which provided a chance to get an early edge in the league race.