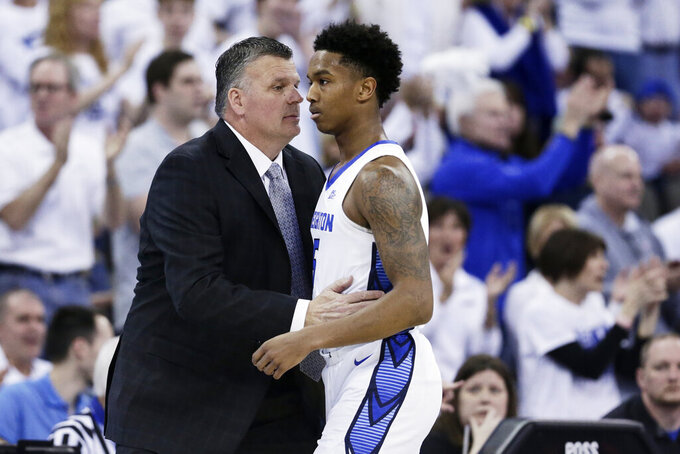 NEW YORK (AP) — Myles Powell, who skipped a chance to play in the NBA to become the first member of his family to earn a college degree, was selected the Big East Conference player of the year after leading Seton Hall to a three-way share of the regular-season title.

Villanova forward Jeremiah Robinson-Earl was chosen the league's freshman of the year and Greg McDermott of Creighton was voted the coach of the year.

The winners were selected by a vote of the league’s head coaches, who were not permitted to vote for their own players. They also represent the three teams that share the regular-season crown.

Powell averaged 21 points, second most in the league and 17th best in the country in helping the Pirates earn a share of the program's first regular-season championship since 1993. The guard from Trenton, New Jersey was at his best on the road, averaging 25.8 points in leading the Pirates (21-9) to a 7-2 mark in Big East play.

Seton Hall never spent a day out of first place throughout the league season. He is the second Seton Hall player to earn Big East Player of the Year honors, joining Terry Dehere (1992-93.)

Robinson-Earl has been a consistent force with the Wildcats, averaging 10.5 points and 9.4 rebounds, which ranked fourth in the league. He shot 81.4 percent from the foul line, which led all freshmen. Robinson-Earl also led league freshmen in minutes played, averaging 32.7.

The 6-foot-9 native of Overland Park, Kansas had nine double-doubles. His rebound total of 290 ranks second among freshmen in program history to Omari Spellman, who had 321 in winning the award two seasons ago.

Despite being picked to finish seventh in the preseason coaches' poll, McDermott has led Creighton to a share of the regular-season title and the top seed in the Big East tournament. The Bluejays are 24-7 overall and ranked seventh nationally, which ties for the highest ranking in school history, also achieved under McDermott.

Creighton has beaten a school-record seven Top-25 teams this season. McDermott is one of 10 finalists for the Naismith Coach of the Year award. In his 10th season at the Creighton helm, McDermott has a 231-116 record and 511 victories as a college head coach.

McDermott's son, Doug, was the conference player of the year in 2014. They are the first father-son combination to win these two awards.