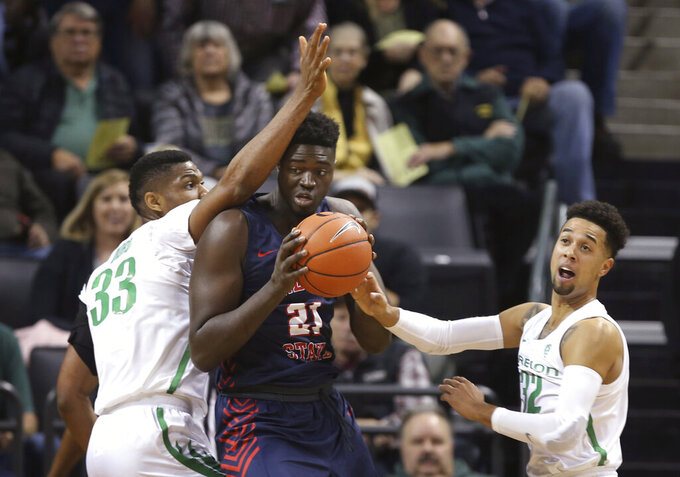 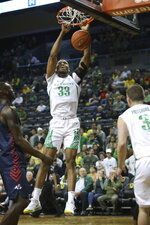 As the No. 15 Ducks' most experienced player, Payton Pritchard stepped up Tuesday night. He had 24 points with seven rebounds and seven assists in a 71-57 victory over Fresno State in the season opener for both teams. It was his 110th consecutive start.

"He's one of the best point guards in the country, obviously," said Anthony Mathis, a senior transfer for the Ducks who played with Pritchard in high school. "We have no worries with Payton."

Chris Duarte, a junior college transfer and one of nine additions to the roster, added 16 points in his first game with Oregon, and Francis Okoro added 12 points and 10 rebounds for his first career double-double as the Ducks outrebounded the Bulldogs 45-31. Okoro is one of three returning players from last year's team.

"I thought Francis set a good tone for us (on rebounds)," Oregon coach Dana Altman said. "He did a very good job."

Oregon took control with a 21-6 run to end the first half at a 38-27 advantage. Duarte had eight points as the Ducks broke away.

After Fresno State scored the opening basket of the second half, Oregon scored the next 10 points, six by Pritchard and the other four on assists by the senior to finish fast breaks.

Fresno State briefly closed within 64-55 with four minutes left before the Ducks put it away with free throws, finishing with 20 in 27 attempts.

"This was a good start for us, we had to compete," Altman said. "I knew we'd have our hands full."

Oregon: In winning its 22nd consecutive home opener, Oregon made Altman the school's career leader in coaching wins. Altman, in his 10th season with the Ducks, had been tied with Ernie Kent at 235 wins.

Fresno State: The Bulldogs have lost 22 straight games to AP Top 25 teams extending back to the 2002 season. They are 0-9 against the Ducks in games played in Eugene.

THE STREAK GOES ON

Oregon made only one 3-pointer in the game, by Duarte midway through the first half, but it extended Oregon's streak of 3s made to 750 games.

Oregon will host Boise State on Saturday in what will be a second tuneup game before the Ducks meet No. 14 Memphis in an anticipated top-20 matchup next Tuesday in Portland.

Fresno State plays its home opener Sunday against Winthrop, a game at which Paul George's No. 24 jersey will be retired in a halftime ceremony.