Prohm out at Iowa State after 2-win season, worst since 1925 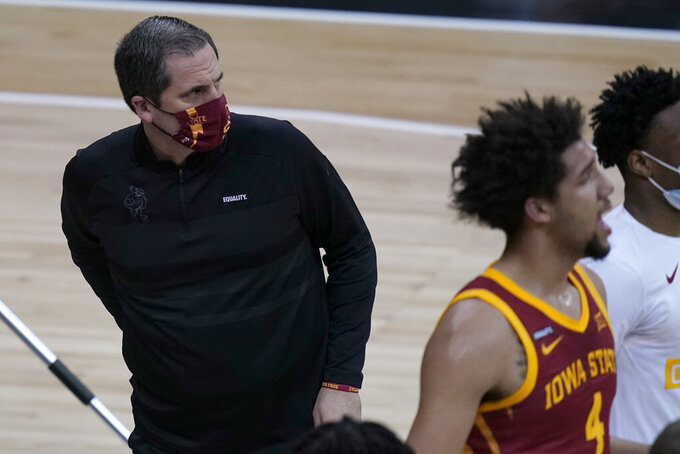 Iowa State coach Steve Prohm waits for his team to gather during a timeout in the first half of an NCAA college basketball game against Oklahoma in the first round of the Big 12 men's tournament in Kansas City, Mo., Wednesday, March 10, 2021. (AP Photo/Orlin Wagner)

AMES, Iowa (AP) — Iowa State and men's basketball coach Steve Prohm have agreed to part ways after one of the worst seasons in the history of the program, athletic director Jamie Pollard announced.

The school said in a statement that Pollard and Prohm met in person Monday night and that Pollard would have additional comment Tuesday.

Prohm was a celebrated hire from Murray State in 2015 and went 97-95 in six seasons with three NCAA Tournament appearances. His first Iowa State team reached the Sweet 16, losing to Virginia as a No. 4 seed.

Prohm's 17 wins against Top 25 teams are third-most in school history. His five road wins over ranked opponents are a school record, and no Big 12 team has had more NBA draft picks than Iowa State's six the last five years.

Iowa State hired Prohm away from Murray State after the popular Fred Hoiberg left to coach the Chicago Bulls. Prohm had a school-record .782 winning percentage in four years with the Racers and won two Ohio Valley Conference titles.

Prohm continued the momentum Hoiberg created, winning 23 games and reaching No. 4 in the AP poll in his first season. Players such as Georges Niang, Monte Morris and Tyrese Haliburton kept Hilton Coliseum rocking.

But after winning the 2019 Big 12 Tournament, the program's fortunes turned. Iowa State went 12-20 last season, and the bottom fell out this season with a run of injuries.

Iowa State's only wins were against Arkansas-Pine Bluff and Jackson State. The Cyclones didn't win a game after Dec. 20.