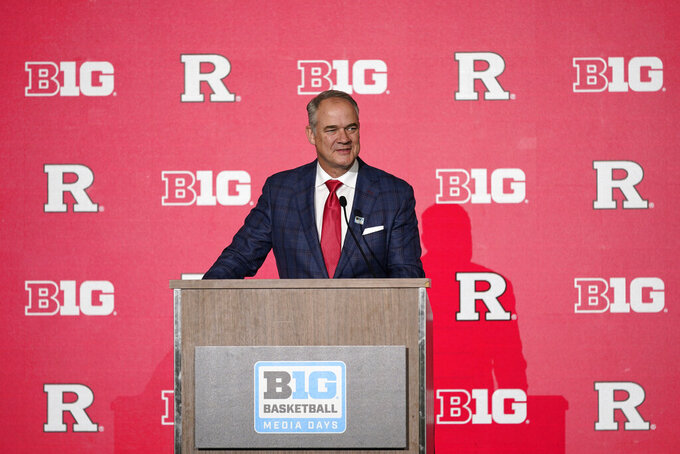 MINNEAPOLIS (AP) — The Purdue Boilermakers are coming off a 29-win season in which they were ranked in the AP top 10 from wire to wire, including the No. 1 spot for one week in December, and drew a No. 3 seed for the NCAA Tournament.

Still, they finished one game shy of first place in the conference, lost to Iowa in the Big Ten Tournament final and were upset by upstart St. Peter’s in the Sweet 16. That didn't sit well with coach Matt Painter or anybody else associated with the program.

While the Boilermakers have lost first team All-Big Ten guard Jaden Ivey and stalwarts Trevion Williams and Sasha Stefanovic, they've still got a team headlined by the 7-foot-4 Zach Edey — one of three unanimous picks for the 11-player preseason all-conference team — that ought to be able to contend for the conference title again.

These days, with the transfer portal doing heavy business, picking the favorites is even more of an inexact science. The Boilermakers were pegged for fifth in the Big Ten preseason media poll.

“You have some people that are being picked in the top half, and 70 to 80% of their guys didn’t play for them last year. Normally when that’s the case, they don’t get picked in the top half,” Painter said. "You’ve got a good chunk of some of these guys that have had really good careers so far so it’s easier to gauge, easier to say this guy averaged 16 points in another high major conference, he’s going to be successful here. Having that experience of success together is still important.”

Kevin Willard took over the Maryland program after 12 seasons at Seton Hall. A longtime resident of New York and New Jersey, Willard revealed some of the discoveries he's made since moving down the Atlantic coast. The first thing to stand out to him was the quality of recruits playing in the Terrapins' backyard — including the District of Columbia, Maryland and Virginia.

“High school basketball, AAU basketball in the DMV is by far second to none,” Willard said. “It’s kind of cool being there because you get first dibs on a lot of kids that obviously we couldn’t get before.”

The first player Willard signed upon arriving in College Park was 6-foot-6 swingman Noah Batchelor, a native of Frederick, Maryland, who played last year at the IMG Academy in Florida. He also picked up a graduate transfer in guard Jahmir Young, a product of DeMatha Catholic High School in the D.C. suburbs who averaged 16.7 points per game over three seasons at Charlotte.

But Willard knows there's no such thing as building a fence around the state.

“You’re never going to keep all your local kids home,” Willard said. “Fan bases love saying that. If you keep everyone home, then you’re not going to be able to play everybody and everyone is going to get mad at you anyways.”

His steepest learning curve might actually be in the dining room.

“You've got to know how to eat crab cakes. I’m learning how to crack crabs and eat crabs. It’s a new thing for me. Very hard,” Willard said with a laugh. “You’ve got to split the middle, take the legs off, go through the whole process.”

Rutgers is aiming for a third straight NCAA Tournament berth, a streak the program has never before accomplished. Coach Steve Pikiell's returning players accounted for 64% of the team’s minutes played last season. Key among those players is fifth-year guard Caleb McConnell, the reigning Big Ten Defensive Player of the Year.

There's also a significant homecourt advantage the Scarlet Knights have developed in recent years at the 8,000-seat building now known as Jersey Mike's Arena, enough to warrant attention in a conference with some of the country's most imposing gyms for visiting teams.

When Indiana's Trayce Jackson-Davis and Race Thompson were mulling over the most raucous road-game scenes, they mentioned usual suspects Michigan State, Ohio State and Purdue. But also:

Pikiell praised the fan base for the environment.

“I think they really like our guys and respect how they play,” Pikiell said. "They play with a little Jersey grit and excitement and enthusiasm.”

Iowa coach Fran McCaffery again has two of his sons on the roster, with sixth-year forward Connor McCaffery back for one more ride in a reserve role and fourth-year forward Patrick McCaffery returning to the starting lineup.

There are downsides to playing for dad, of course. Connor told on himself for feeling “a little bit more comfortable talking back” to the coach than anyone else in authority. Patrick cited the pressure that comes from the family name and the unfounded assumptions of nepotism around status on the team.

The good outweighs the bad, though, like being part of a true family environment. Then there's the credibility that Connor has built up through so much time in the program.

“We think alike,” Connor said. “My suggestions and points a lot of times are on the same page. He gives me the freedom to audible plays and call plays.”