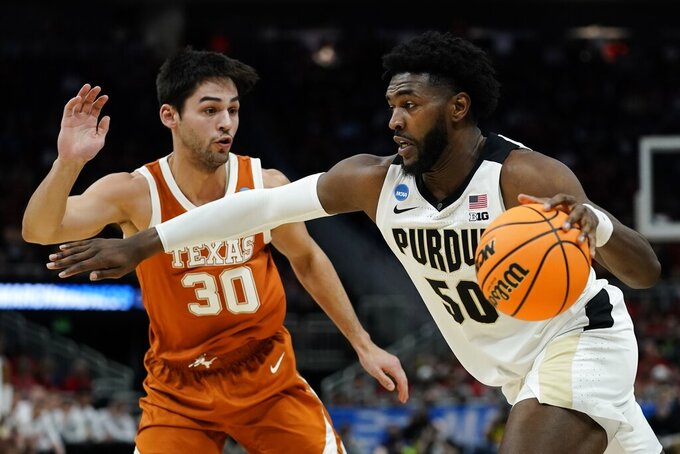 MILWAUKEE (AP) — Purdue’s Jaden Ivey had to hear from Courtney Ramey all night as Texas’ tenacious, talkative guard followed the future lottery pick up and down the court.

With just over a minute left, Ivey delivered the last word.

Purdue was clinging to a 74-71 lead when Ivey made a move to get clear of Ramey before sinking a 3-pointer with 1:01 remaining. That started a 7-0 run to end the game as Purdue outlasted Texas 81-71 in a second-round NCAA Tournament game Sunday night.

“All game he was chirping, just trying to get me out of rhythm,” Ivey said. “I just stayed poised the whole game. That’s what it comes down to. People are going to try to get you out of rhythm and try to talk to you. You’ve just got to stay focused on the main goal, and I felt like I did that.”

Ramey sure made him work for it, though.

Ivey didn't score in the first 16 minutes of the game and didn't have a single basket in the first half. The Associated Press All-America second-team selection kept working and finished with 18 points to make sure Purdue finally got past Texas coach Chris Beard in March.

“Ramey's one of the best defenders in the country,” Beard said. “Ivey’s obviously a special player. We held him to four made field goals tonight. ... He got loose from us a few times. And give him all the credit. He’s one of the quickest, fastest players that I’ve ever seen on tape and he was just as fast in person.”

The third-seeded Boilermakers (29-7) gave away an early 14-point lead but recovered and advanced to an East Region semifinal on Friday in Philadelphia against this year’s out-of-nowhere tourney darling, the 15th-seeded Saint Peter’s.

“Just knowing what I’ve been through with those guys, it means a lot to be in this position,” said Trevion Williams, who led Purdue with 22 points. “This is what we work for.”

Purdue made the most of its size advantage and capitalized on a major disparity at the free-throw line. Purdue had 46 attempts, making 33, while the Longhorns went 7 of 12 on free throws.

Timmy Allen, Texas’ leading scorer at 12.3 points per game, scored two points in 18 minutes before fouling out with 6:25 left. Christian Bishop also fouled out for Texas after getting 10 points and seven rebounds.

“Really the differential in the game, you guys know this, the free throws,” Beard said. “(I've got to) be careful what I say. 46-12, there hasn’t been a lot of games in the NCAA Tournament like that.”

Beard had won each of his two previous NCAA Tournament matchups with coach Matt Painter's Boilermakers, who had the better seeding each time. Beard's Little Rock squad knocked off Purdue in the first round in 2016, and he led Texas Tech past the Boilermakers in a 2018 regional semifinal.

Big man Zach Edey had 11 points and 10 rebounds for Purdue, which also got 11 points from Eric Hunter Jr.

Purdue took a 28-14 lead after going on a 20-0 run as Texas went scoreless for a stretch of 9:44. But the Longhorns rallied to take the lead with just under 16 minutes left, and the game went back and forth from there.

“It just showed how tough we are, how determined we were to stay in this game,” Jones said.

It was tied when Ivey drove and passed to Hunter, who sank a 3-pointer from in front of Purdue’s bench with 9:17 left. Purdue stayed in front the rest of the way, though Texas kept it interesting.

Ivey then drained his long 3 and Texas never threatened again.

“To finish it the way we did is great,” Ivey said. “I’m super proud of all our guys.”

Texas: The Longhorns showed in Beard’s first year that they’re ready to end their recent string of postseason misfortune. Their first-round victory over Virginia Tech was their first NCAA Tournament win since 2014. “This culture’s strong, the coaching staff is strong, and players just got to come along with it and trust it,” Jones said.

Purdue: The Boilermakers have won each of the last 31 games they've led at halftime, continuing a streak that began last season. They've outrebounded their first two NCAA Tournament foes 83-61 and have outscored them 60-13 from the foul line.

Purdue is two wins away from its first Final Four berth since 1980.