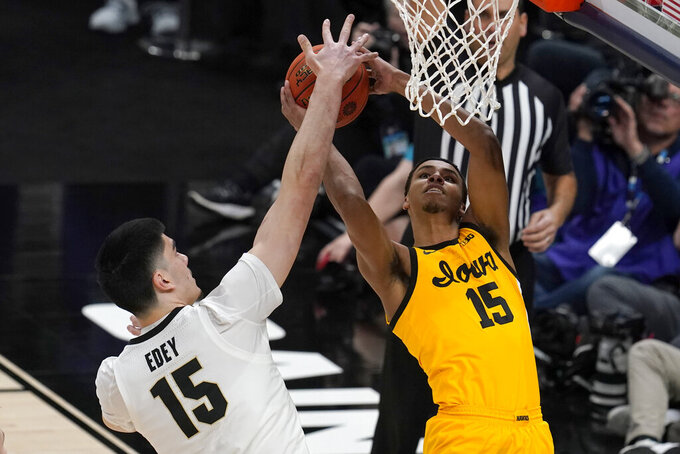 Purdue is using its extraordinary size to push around opponents, dominate the boards and get to the free-throw line over and over as it seeks its first Final Four berth in over four decades.

The Boilermakers’ frontcourt combination of 7-foot-4 Zach Edey and 6-foot-10 Trevion Williams causes matchup issues for just about any team in the country. Purdue has outrebounded its first two NCAA Tournament foes 83-61 and has outscored them 60-13 from the foul line.

“Every game’s going to be physical,” Williams said before the Boilermakers’ first-round victory over Yale. “I just think if we go in and embrace the physicality of the game, we’ll be fine. Just use our size advantage as best as possible, being smart, just being disciplined.”

That sets up an interesting matchup Friday when the third-seeded Boilermakers (29-7) meet the tournament’s biggest surprise in No. 15 seed Saint Peter’s (21-11). Saint Peter’s features 6-7 forward KC Ndefo, who led the nation in blocks last season and ranks second among all active Division I players in career blocks.

Saint Peter’s coach Shaheen Holloway offered the quote of the tournament so far when he was asked after a second-round victory over Murray State how his players stayed calm when the Racers tried pushing them around.

“I got guys from New Jersey and New York City,” Holloway replied. “You think we’re scared of anything? You think we’re worried about guys trying to muscle us and tough us out? We do that. That’s who we are.”

Through the first two rounds, Purdue has 18 more free throws made and 29 more attempted than any other team in the NCAA Tournament. The Boilermakers’ plus-11 rebound margin ranks behind only Kansas and North Carolina among teams in the Sweet 16.

Purdue’s prowess in the paint has provided an effective complement to Associated Press All-America second-team guard Jaden Ivey, who is averaging 20 points through the first two rounds.

Edey has drawn seven fouls in each of Purdue’s last two games and is 15 of 22 on free throws. He has more free-throw attempts than anyone remaining in this tournament. And he’s done all that while playing just 17 minutes per game.

The tag-team substitution approach Purdue uses with Edey and Williams enables both to stay fresh. Edey has averaged 13.5 points and 9.5 rebounds thus far in the tournament. Williams has played 21 ½ minutes per game and matched a season high by scoring 22 points against Texas.

“I kind of took my time and got to my move, just doing what I do best, getting to my jump hook,” Williams said afterward. “I kept it simple more than anything.”

Painter has shown throughout his Purdue tenure that he can produce quality frontcourt players of various sizes.

The Boilermakers reached a regional final in 2019 with a lineup that included 7-3 center Matt Haarms. JaJuan Johnson was 6-10 and a lean 221 pounds but earned Associated Press All-America first-team honors in 2011. Caleb Swanigan, who’s 6-9, was a first-team All-America selection in 2017.

“A part of Purdue’s identity is their size,” Texas coach Chris Beard said after his team’s loss to the Boilermakers. “Coach Painter’s teams always seem to have some of the biggest players in college basketball.”

None of those other big men ever reached a Final Four, something that has eluded Purdue since 1980, when the Boilermakers were led by consensus All-America center and No. 1 overall draft pick Joe Barry Carroll.

This year’s team has a great opportunity to end the drought.

The Boilermakers are the top seed remaining in the East Region. A victory over Saint Peter’s would send the Boilermakers to a regional final against either No. 4 seed UCLA (27-7) or No. 8 seed North Carolina (26-9).

Purdue has a 57.4% chance of reaching the Final Four, according to FanDuel Sportsbook, which gives only Kansas and Gonzaga better odds. Even so, the Boilermakers are taking nothing for granted.

“You’ve just got to be prepared and you’ve got to be locked in,” Williams said. “It all goes to the small things, those little things, boxing out, rebounding, hitting free throws. That stuff means so much more this time of year. It’s about understanding what’s on the line.”