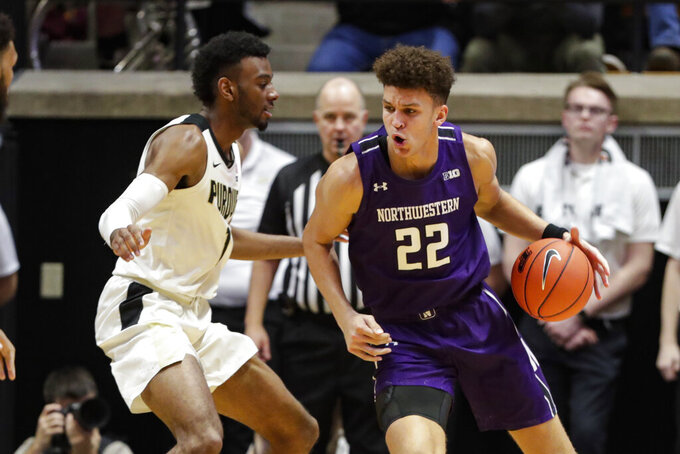 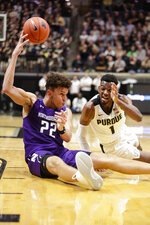 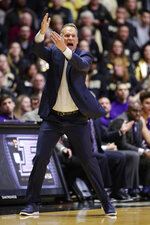 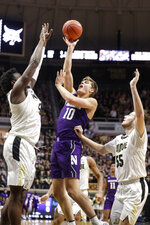 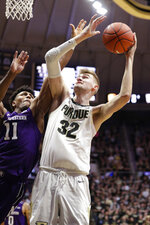 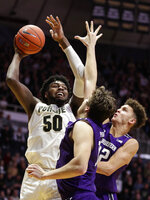 WEST LAFAYETTE, Ind. (AP) — For Matt Haarms, defense will be the key to Purdue's success. If the Boilermakers have to win ugly, Haarms said so be it.

Sasha Stefanovic scored 14 points and Haarms added 12 points to lead Purdue to a 58-44 victory over Northwestern in the Big Ten opener for both teams on Sunday.

“The outside shot didn’t go in at all throughout the entire game,” Haarms said. “I think we responded really well after the initial shock of ’none of our shots are falling.’ We knew this was going to be a game where we grind it out on defense. We had stops 10 of the last 11 possessions in the first half and it translated into the second half.”

The Boilermakers (6-3) closed the second half with a nice spurt as well. Purdue led 49-42 with 4:01 to go before reeling off nine straight points to take command. Stefanovic scored 10 points in the second half including a 3-pointer that capped the 9-0 run and ignited the crowd.

“He had some looks that didn’t go down in the first half,” Purdue coach Matt Painter said of Stefanovic. “At the end of the day, he has a good (stat) line, going 5 of 10 from field and 2 of 5 from 3s and not turning the ball over (in 34 minutes).”

For the second consecutive game, the Boilermakers started the 7-foot-3 Haarms and 6-9 Trevion Williams together. Haarms hit 5 of 9 shots and Williams hit 3 of 4 for eight points.

“We work together well offensively,” Haarms said. “We know how each other plays. If there is a question defensively, I think I have to do a better job guarding the (power forward).”

Jahaad Proctor added 10 points for Purdue, which won its seventh in a row over Northwestern. Haarms, Williams and Eric Hunter Jr. each had seven rebounds as Purdue held a 38-31 edge.

Pete Nance led Northwestern (4-4) with 14 points. He was the only Wildcat in double figures.

“We played nine guys in this game and five are playing in their first conference game,” Wildcats coach Chris Collins said.

Collins described Purdue as one of the toughest places in the conference.

“For us to come out and not be rattled, I feel like we’re getting better,” he said. “We have to continue to learn how to win. When we got it to 49-42 after (Miller) Kopp hit a 3, I thought we could maybe steal a game if we got a couple of stops. Give them credit it was 9-2 after that. That’s what winning teams do. They executed and got stops when they needed.”

Purdue, which shot 39% overall, held a 22-16 lead after a sluggish first half as both teams suffered long scoring droughts.

“I felt like we had some good looks, but we also had some empty possessions,” Painter said. “Give them credit, they had a good start to the game. We’re learning as we go along offensively.”

After A.J. Turner hit a 3-pointer to give the Wildcats a 14-13 with 7:44 left before the break, the Wildcats managed just one field goal the rest of the half.

Northwestern shot just 27% in the first half and 34% overall.

Averaging 12 turnovers a game, Purdue was able to cut that in half with just six. That certainly helped on a slow shooting night. Northwestern committed 12.

Northwestern will look to get its offense in gear and avoid another stumble against SIU-Edwardsville. The Wildcats already have suffered disappointing home losses to Merrimack and Radford.

Fresh from Wednesday’s 69-40 rout of No. 5 Virginia, Purdue began defense of its Big Ten title with a lackluster shooting performance.

Northwestern faces SIU-Edwardsville in a nonconference home game on Sunday.

Purdue is at Big Ten opponent Nebraska on Sunday. The Boilermakers follow that with a nonconference game at Ohio on Dec. 17 and No. 24 Butler at the Crossroads Classic in Indianapolis on Dec. 21.