Purdue's Edey moves from role player to center of attention 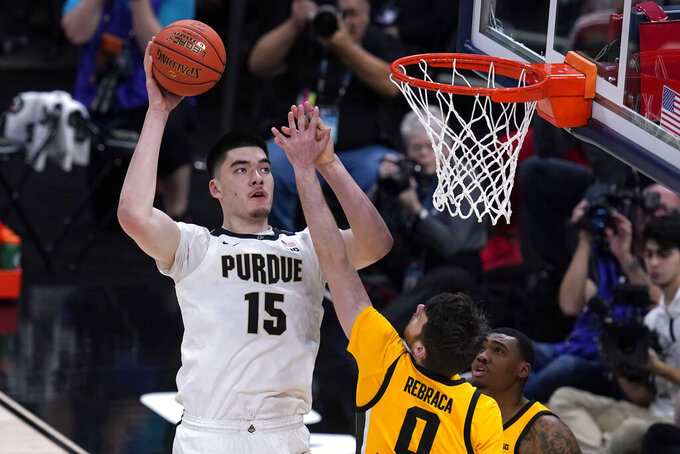 Whether he was striking out batters or scoring hockey goals in Canada or emerging as a basketball star at a premier American prep school, people watched with amazement as the uniquely talented big guy dominated the field of play.

“He’s going to have a great year for us. We have a very talented front court, really feel we have one of the best front courts in the country," Painter said. “But we're obviously playing through Zach.”

Edey burst onto the college scene two years ago as a natural shot-blocker who towered over the league's tallest and most physical players. Back then, Edey was a complementary piece to all-conference forward Trevion Williams and future lottery pick Jaden Ivey.

Last season, he became a better scorer and a double-double machine.

So when Williams and Ivey opted for professional careers, Edey became the natural successor in a decade-long lineage of Purdue big men. The list includes names such as Williams, Matt Haarms, Isaac Haas, the late Caleb Swanigan, A.J. Hammons and now Edey.

He loads up on 7-foot centers and rotates them to challenge opponents inside. The addition of Will Berg, a 7-2 freshman from Sweden, could give Painter the opportunity to continue the tradition.

“We can go big with Zach and Will, we can go small with me and Caleb (Furst) and Trey (Kaufman-Renn),” forward Mason Gillis said, referring to the two 6-9 sophomores. “I’m really excited to see how we piece it together this year. I think we're going to surprise some people."

Nobody will be surprised by Edey after he played on Canada's FIBA World Cup team this summer.

While a concussion kept him out of Purdue's first practices, Edey is healthy now and eager to improve on a sophomore season that included averages of 14.4 points, 7.7 rebounds, 1.2 blocks and1.2 assists while shooting 64.8% from the field in just 19.0 minutes. And in his new role, Edey's believes those numbers will only increase as he tries to take Purdue to its first Final Four since 1980.

“I feel like I can play more minutes," Edey said when asked what more he can do. “Just being able to be in the game more, play every minute as good as I can and see where it goes from there.”

Furst and guard Ethan Morton each averaged about 15 minutes per game last season as Kaufman-Renn and forward Brian Waddell redshirted. Gillis has 48 career starts and guard Brandon Newman made 23 starts two years ago and hopes to play more that way this season.

“Things last year went the way they did," Newman said. "This year, I’m looking forward to turning things around.”

“He’s put the ball in the basket, and he’s had a lot of different experiences being at four schools in six years," Painter said. "I think he's really going to help give us that scoring punch.”

Painter has been impressed by Furst's improved shooting, but Gillis thinks the sophomore forward provides another essential quality.

“He definitely brings a spark to the team that we need," Gillis said.

Furst's response: “I try to be one of those loud guys and bring some energy. With such a quiet team, I think energy is contagious and I’ve always thought you fake it till you make it.”

Painter never has feared tough front-loaded schedules and this season is no exception. After hosting Milwaukee in the Nov. 8 season opener, Purdue faces Marquette, West Virginia, Florida State and a likely matchup against Gonzaga. In December, the Boilermakers have two early conference games before taking on Davidson in Indianapolis and beginning league play.