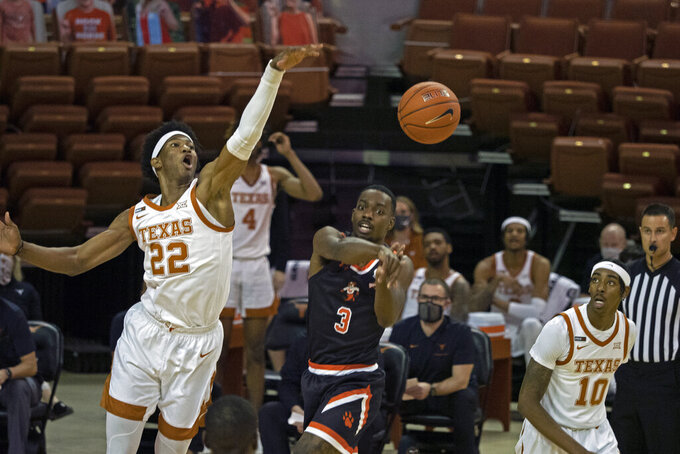 “He's a maverick,” coach Shaka Smart said. “He's not gonna always do everything exactly by the textbook.”

Ramey, a junior, has done better with that this season than last. He scored 17 points, including 5-of-7 shooting on 3-pointers, as No. 11 Texas defeated Sam Houston State 79-63 Wednesday night.

Ramey is 15 for 32 from 3-point range (46.8%) this season after making his first five attempts against Sam Houston. He drained his fifth with 16 minutes remaining, and those five 3s matched a career best. He hit five in a game twice as a freshman, when he shot 38.6% from behind the arc. Last season he slipped to 31%.

“I shot a lot of 3s over the summertime, trying to shoot the same shot every time," Ramey said. “I became a lot more disciplined, taking the right shot.”

Smart said the coaching staff encourages Ramey to step into his shot first with his left foot, then with the right.

“Statistically, if you take his freshman and sophomore year, on shots when he steps in left foot then right foot, he's really shot it well, like 45%," Smart said. “But when he steps in awkwardly, he has not shot it as well. He's shooting with confidence now and for the most part he's taking really good shots.”

Ramey didn't just shoot against Sam Houston State, either. He had six assists on the night.

Sam Houston never was in contention. Ramey gave Texas an 8-0 lead with 18:22 left in the first half, prompting a timeout by Sam Houston coach Jason Hooten.

When play resumed, Ramey made another 3-pointer. The Longhorns led 44-26 at halftime.

Texas led by 27 around midway through the second half. Then the Longhorns went through a stretch of missed shots, turnovers and improved shooting by Sam Houston State that enabled the Bearkats to reduce the deficit to 16 in a span of less than three minutes.

“The thing I was encouraged by is that when we got down by 27, we fought,” Hooten said. “Now I have to figure out what to do to prevent us from falling behind so badly.”

The Longhorns finished with 18 turnovers.

“Too many,” Smart said. “We started the second half with really good energy. That was a point of emphasis. There was a significant part of the second half when we were a step off, a step behind.”

Sam Houston State: Nutall, an All-Southland Conference guard last season, was averaging 21 points per game coming in, but Power Five opposition has been rough on him. Nutall shot 5 of 17 at Texas Tech and 3 for 13 at LSU. He was 3 for 11 at one point in the second half against Texas before heating up and finishing 8 for 18.

Texas: The Longhorns don’t have great shooters. They ranked 169th nationally in 3-point shooting at 32.8% before Wednesday. But they have capable shooters. Texas went 8 of 17 from long range in the first half against Sam Houston, led by Ramey’s 4 for 4. The Longhorns finished 10 for 31.

The Longhorns did nothing to help or hurt themselves against mid-major Sam Houston State, but they should face stronger opposition Sunday against Oklahoma State.

Hooten said he tested positive for COVID-19 at one point, as did most of his players. “We've missed 38 days of practice,” he said.

NOT AS BAD AS IT SOUNDS

Sam Houston State hasn't defeated Texas since 1950, but the schools have met only seven times since that 55-54 Bearkats victory.

Texas: The Longhorns open Big 12 competition by hosting Oklahoma State on Sunday. The Cowboys already played a conference game, losing to TCU on Wednesday. Texas was initially scheduled to play at No. 2 Baylor on Sunday, but the game was postponed because of COVID-19 protocols within the Bears’ program.