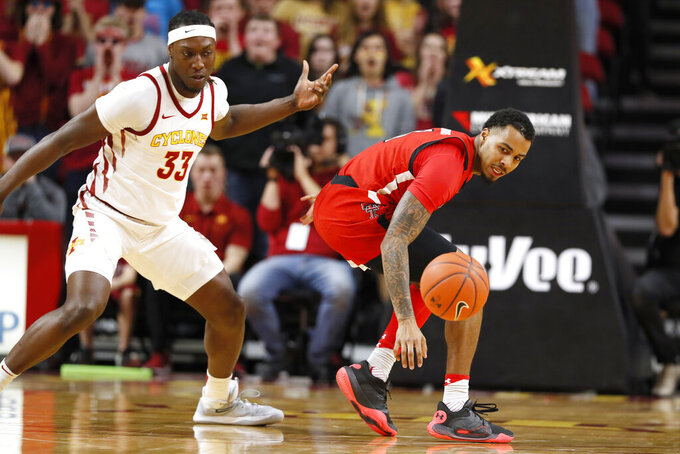 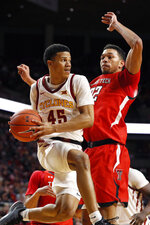 That’s because the Red Raiders didn’t really need one.

Freshman star Jahmi’us Ramsey scored a game-high 25 points and Texas Tech made 15 of its first 19 shots en route to an 87-57 victory of the Cyclones at Hilton Coliseum.

“That was one of our better halves offensively,” said Texas Tech coach Chris Beard, whose team has won five of its past six games. “If we play like that, we can play with anybody in the country.”

Kyler Edwards added 19 points and Kevin McCullar grabbed a game-high 11 rebounds for the Red Raiders, who handed Iowa State (11-16, 4-10) its most lopsided loss in a half century of basketball at Hilton Coliseum.

“Our competitive spirit on defense was the difference in the game,” Cyclones coach Steve Prohm said. “That's got to change and it hasn’t, so we've got to continue to address that.”

Texas Tech strengthened its grip on third place in the conference standings and created a two-game lead over fourth-place West Virginia with four games remaining in the regular season.

“I think we were more aggressive,” Ramsey said of Saturday's game.

The Red Raiders cooled off considerably in the second half, but still finished 32 of 56 from the field (57%), while limiting Iowa State to 30% shooting.

“We wanted to be an aggressive team today,” Beard said. "It’s a challenge to do that on the road. Everything is set up for you not to be aggressive. To win, February, March and eventually April, you have to be aggressive. I think we did a good job not settling.”

Texas Tech: The Red Raiders held an opponent to 45% shooting or worse for the fifth time in the past six games. Texas Tech outscored Iowa State 46-22 in the paint and improved to 5-0 this season when scoring 80 or more points.

Iowa State: The Cyclones had won four of their past five home games, but Saturday marked their third double-digit home loss of the season against the Big 12’s top three teams. Iowa State has shot 36 percent or worse in each of those setbacks.

“We're always striving for 40 minutes. That's the way it is in college basketball. Everybody gets themselves in a situation where eventually you're going to be in a survive-and-advance type game. The goal is to play the best. If the other team beats you, you have a nice offseason. Float the river, hang out and not much regret. What sucks is that last game if you have regret, then the water's cold and the beer's hot.” — Texas Tech coach Chris Beard on late-season basketball