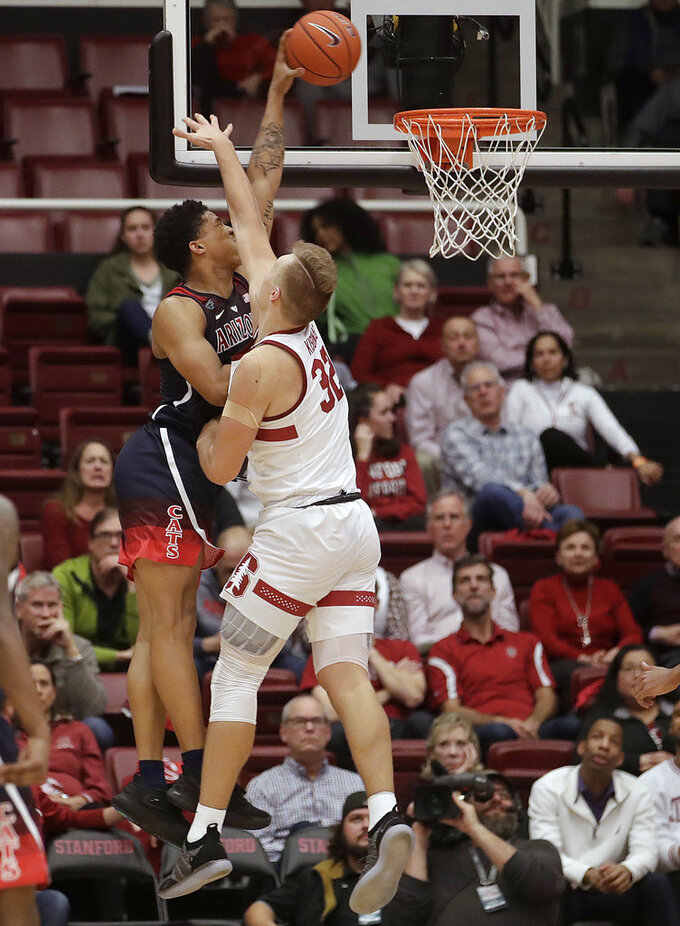 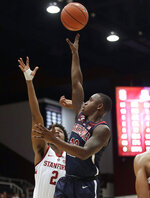 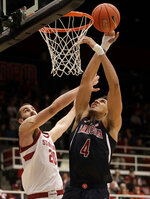 STANFORD, Calif. (AP) — Arizona coach Sean Miller called it the "hidden story of the game," on the Wildcats turning the ball over twice in the second half.

"To play the final 20 minutes with only two turnovers gave us the best chance to win," Miller said. "A lot of times, the loss or the win happens because of an error."

Brandon Randolph scored 17 points, one of five players to reach double figures, and Arizona survived a scare from Stanford, beating the Cardinal 75-70 on Wednesday night.

Ira Lee scored four of his 12 points in the final 23 seconds for the Wildcats (12-4, 3-0 Pac-12), who won their fifth straight. Brandon Williams also scored 12 points and both Chase Jeter and Ryan Luther added 10.

KZ Okpala matched his career-high with 29 points for the Cardinal (7-8, 0-3), who lost their fourth in five games. Daejon Davis added 15 points.

"We knew KZ Okpala is a terrific player; he's one of the best players in the Pac-12," Miller said. "We hit about a six-minute stretch in the second half where we defended him the right way. Dylan Smith guarded him and we gave great help. Other than that, we really didn't have an answer for him."

Okpala said he changed gears because Arizona defended the 3-point shot so well. Stanford was 1 of 9 from long range.

The Cardinal was up 52-47 with 12:05 left to play before the Wildcats scored the next 10 points and went on a 14-2 run to open a seven-point edge in the final seven minutes.

Josh Sharma dunked, on an alley-oop pass from Okpala, with 1:13 remaining to bring the Cardinal within 69-68 but Lee answered at the other end and Stanford missed a jumper, with Lee coming up with the rebound.

Arizona made an early run to go up by eight less than four minutes into the contest but the Cardinal was able to rally and take a brief lead with 6:31 left in the first half.

The Wildcats regained the lead 13 seconds later and stayed in front the rest of the first half, taking a 40-38 advantage into the intermission.

Arizona won its 18th straight from Stanford, the longest intra-conference win streak in the conference. The Cardinal last beat the Wildcats at home on Jan. 4, 2009. ... Arizona played a game in its fifth time zone Wednesday, joining Gonzaga and Mississippi Valley State as the only three schools in the nation to do so. ... Randolph has reached double figures in scoring in all 16 games this season, one of three Pac-12 players to have achieved that distinction.

Stanford guard Daejon Davis injured his right ankle in the last home game, a victory over Long Beach State. He left Maples Pavilion wearing a boot but otherwise in good condition. He missed Stanford's Pac-12 opener against UCLA and has since returned to full health. He's scored in double figures the past seven games he's played. ... Okpala has more than doubled his scoring and rebounding totals from this point last season.

Arizona plays at California on Saturday.