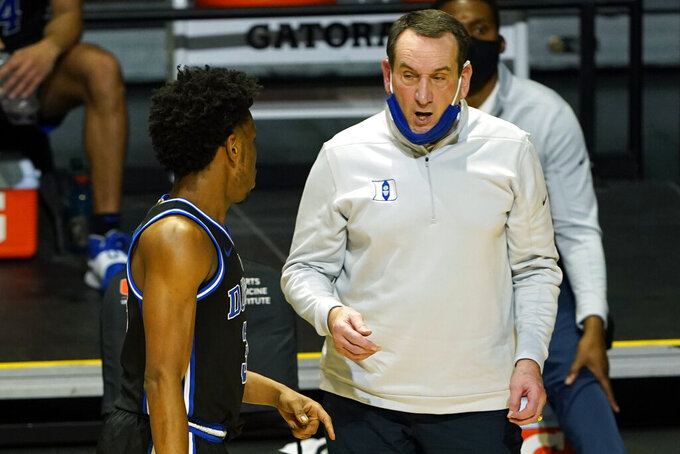 It is a strange year for the Duke-North Carolina rivalry.

The two programs with a combined 11 NCAA championships typically are among the nation’s elite as they charge into February. Instead, the Hall of Fame coaches for both the Blue Devils and the Tar Heels are trying to correct mistakes, find consistency and get through to their young rosters entering Saturday’s meeting – the first with both teams unranked in more than six decades.

“And then all of a sudden, ‘Wow, we’re getting ready to play Duke,’ and we’re nowhere near where we want to be. I know that part of it for sure.”

Right now, neither team is certain to make the NCAA Tournament – part of a larger trend of tradition-rich programs having bumpy seasons amid the coronavirus pandemic.

Saturday’s game at a fan-less Cameron Indoor Stadium marks the first meeting since February 1960 with neither team in The Associated Press men’s college basketball poll.

The struggles are most pronounced for the Blue Devils (7-6, 5-4 Atlantic Coast Conference), who returned only five letter winners while restocking the roster with six freshmen. Sophomore Matthew Hurt has blossomed as a scorer, but Duke otherwise has yet to discover a true game-to-game identity.

The Blue Devils rank 28th nationally in KenPom’s adjusted offensive efficiency (112.6 points per 100 possessions) and 49th in defense (94.4) after ranking in the top 12 in both categories in each of the past three years. And after a blowout win against Clemson, Duke lost at Miami in a performance Krzyzewski labeled afterward as “soft” while saying he needed to do better in reaching his team.

“I would say … at times I react to the frustration. And I’ve got to be careful about that with this group more than coaching (Jon) Scheyer and (Nolan) Smith when they were in 2010. You didn’t have to worry about it, you’d just do anything and they would respond to it.”

The Tar Heels (11-6, 6-4) have a deep frontcourt that has made them one of the nation's best rebounding teams. A young backcourt headlined by freshmen Caleb Love and RJ Davis in lead ball-handling roles has made gains, but there also have been issues with turnovers and shot selection.

UNC ranks 266th nationally in KenPom’s turnover percentage (21% of possessions), which showed up in Tuesday’s loss at Clemson after the Tar Heels had won six of seven through January. That explains why Williams — who thought his team was ready to play well at Clemson after recent strong practices — has dismissed questions about whether it had “turned a corner."

These days, the Tar Heels and the Blue Devils are just trying to correct enough problems to win a rivalry game, ranked or not.

“It's going to be a time to turn things around, play together, play the right away and just go out there and have fun," Duke freshman guard DJ Steward said. “This is going to be a fun game for us.”