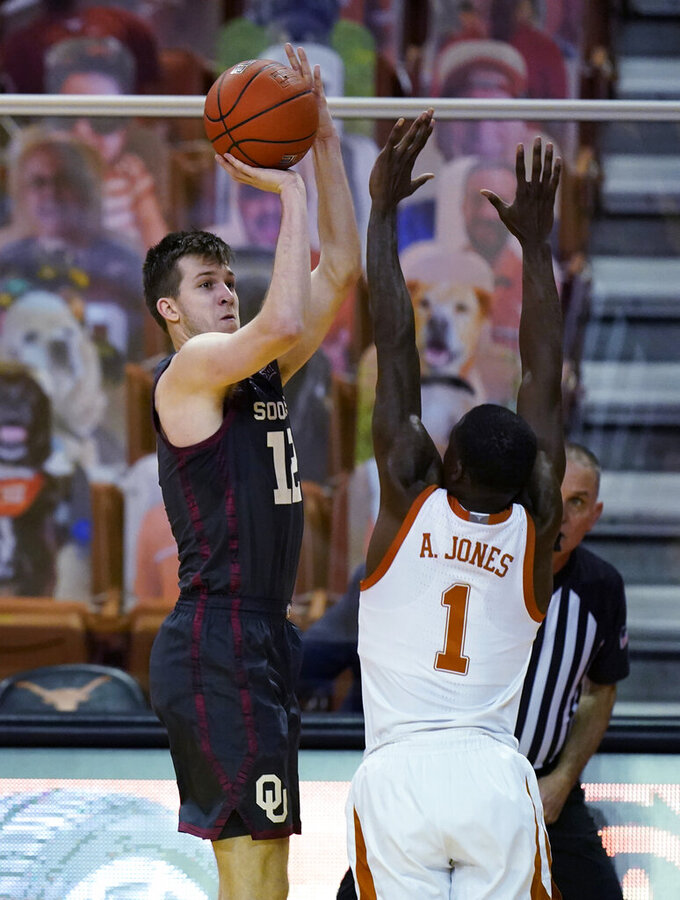 AUSTIN, Texas (AP) — The Oklahoma Sooners are surging. And when they can grab a tough win at Texas, it makes no difference to them the Longhorns were playing short-handed and without their coach.

Austin Reaves scored 23 points and made two free throws with 18.3 seconds left that proved to be the difference in an 80-79 victory that was stalled by constant fouls and video reviews, and wasn't settled until the Sooners intercepted a long inbounds pass at the end.

“What a battle,” Oklahoma coach Lon Kruger said after the Sooners notched their fourth straight win and second in a row over top-10 opponents. “I feel happy for the guys that they hung on.”

Texas (11-3, 5-2 Big 12) rallied from 11 down to force the game into the final seconds despite playing without coach Shaka Smart, who announced Monday he has COVID-19, starters Jericho Sims and Courtney Ramey, and key reserve Brock Cunningham. Three more Longhorns fouled out and Texas was down to just five scholarship players by the final play. Assistant coach K.T. Turner took over for Smart for the game.

Longhorns guard Matt Coleman, who sat out most of the second half, fouled out when he sent Reaves to the line for the decisive free throws. Texas got back within one when Andrew Jones made two free throws seconds later. The Longhorns then nearly forced a turnover on the inbounds pass before fouling Oklahoma's Jalen Hill with 2.3 seconds to play.

After a lengthy review to make sure Hill wasn't out of bounds when he caught the ball, he missed his first free throw, then intentionally missed his second. But the shot failed to hit the rim, giving Texas one last chance.

But left on the wrong end of the court, Turner used walk-on Blake Nevins, a former high school quarterback, to try a long pass that the Sooners intercepted, sending Texas to its second Big 12 home loss in its last three games.

“We'll have to work on missing free throws, I guess," Kruger said.

Elijah Harkless scored 13 and Umoja Gibson had 12 for the Sooners (10-4, 6-3). Before his late free throws, Reaves had a key three-point play with a drive and layup that drew a fifth foul on Texas forward Greg Brown.

“You just got to make the right play at the end of the game like that, trust your instinct," Reaves said.

Kai Jones had 15 points and 10 rebounds, and Andrew Jones scored 13 for Texas.

Oklahoma: The Sooners appeared in the Top 25 this week for the first in two years and face quite the run of games if they hope to stay there. They are in the middle of a rugged stretch of playing seven ranked opponents in eight games. “We’ve always thought we could be this good, and we think we can be better,” Reaves said.

Texas: The Longhorns are getting turned upside down by COVID-19 like some other programs have this season. Texas hasn't said when Smart might return and Turner said the Longhorns had only five players available to practice at some points last week. Coleman said he was among the players who had to quarantine and had just returned.

“There were a couple of times our guys could have just laid down and quit. They kept fighting," Turner said. “There was rust ... We've had guys out left and right.”

Reaves hit the highlight shot of the game when was on the baseline, got bumped and lofted a high, arcing shot that floated over the corner of the backboard and in.

“I thought I got fouled. I just shot it to get to the free-throw line and it went in. So I guess it was a good shot,” Reaves said.

Oklahoma hosts No. 9 Alabama on Saturday in the SEC/Big 12 Challenge.

Texas plays at Kentucky on Saturday in the SEC/Big 12 Challenge.