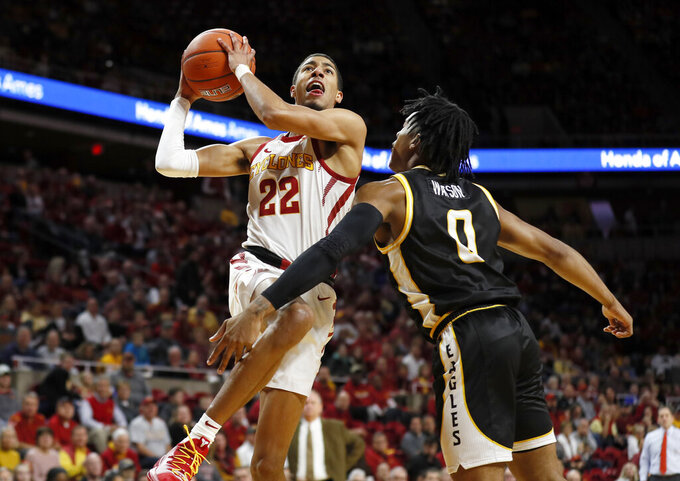 AMES, Iowa (AP) — Iowa State looked like a team searching for its identity during the first month of coach Steve Prohm’s fifth season in charge.

At just 4-3, Iowa State is off to its worst start under Prohm. But all three of those losses came against fellow Power Five competition — and two were relatively close ones against ranked opponents, No. 4 Michigan and No. 16 Seton Hall, at the Battle 4 Atlantis last week.

Instead of being disappointed by a 1-2 finish in the Bahamas, Prohm said he was encouraged the trip clarified his team’s strength and weaknesses.

“If we learn from what we did down there, if we grow from how we played down there, I thought it was great,” Prohm said. “Because we got some things exposed, we got some things thrown out there in the middle to say, ‘Hey. This is what we have to get better at.’ Because if we do that, we can really exceed a lot of people’s expectations.”

The Cyclones, who have struggled at times on defense after losing three starters and two crucial reserves from last season, host UMKC (5-4) on Wednesday to kick off a five-game homestand.

Iowa State’s offense hasn’t been a problem, and the main reason it has the Big 12’s top attack at 83.3 points per game is point guard Tyrese Haliburton. He is averaging 15.7 points, 8.9 assists and six rebounds a game, and the three highest-scoring games of his career came in his last three games. Haliburton also ranks eighth nationally with three steals a game.

If Iowa State can pair Hailburton’s play with an improving Rasir Bolton, it will likely have a much better chance to compete in the Big 12.

Bolton, a sophomore guard, transferred from Penn State in the offseason. He didn’t find out he could play immediately until late September, and Bolton was a bit inconsistent to start the season. But Bolton scored 42 combined points in a 104-89 win over Alabama and an 84-76 loss to Seton Hall on 14 of 24 shooting.

“He was able to put pressure on the rim. I just met with him (Tuesday) and I told him (that) we need him playing downhill, north-south, not east-west,” Prohm said. “I thought he really pushed the pace off makes and misses versus Alabama.”

In the frontcourt, Prohm might not have enough minutes to go around for three deserving post players; starters Michael Jacobson and Solomon Young and reserve George Conditt IV.

Jacobson, a senior averaging 8.3 points and 7.6 rebounds, gives the Cyclones a big man who can stretch out defenses because he is shooting 38.5 % from beyond the arc.

Young, a 6-foot-8 junior, is averaging a career-high 10.7 points and is arguably Iowa State’s best offensive option inside of 10 feet. Young also has the kind of frame and interior toughness the Cyclones will need in conference play.

But Conditt, a 6-foot-10 sophomore, gives Iowa State a needed presence at the rim. He is blocking 3.2 shots a game in just 17.6 minutes, and he’s also third in the country in shooting percentage at 76.9.

“It’s not easy, because you can make a case for all of them playing more,” Prohm said about managing his frontcourt. “They’re all very different with what they bring to the table. The trademark of a great team is, can you understand when it’s your night and when your number is called, and can you really praise and be excited when your teammate does something great?”