Remy Martin revs up his hair-raising game for Arizona State 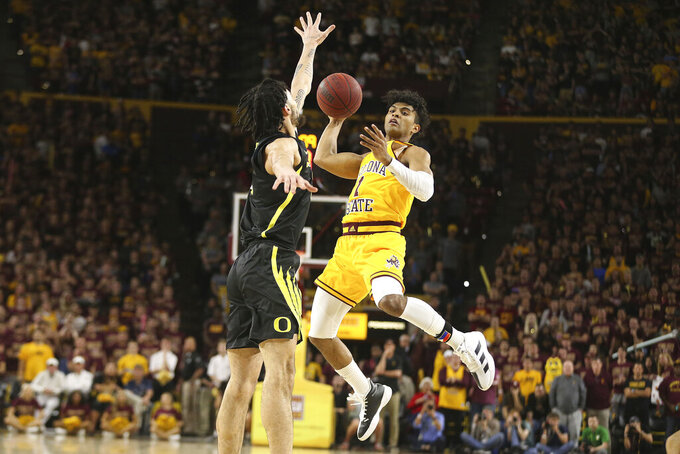 TEMPE, Ariz. (AP) — Remy Martin's bloom of hair has an ebullient quality to it, shimmying as he shakes a defender, bopping when he stops and pops, swooshing back as if he's in a wind tunnel as he flashes through the lane.

It's in his game, too, in the way the Arizona State junior guard whips crowd-roaring, no-look passes through his legs, raises up for 3-pointers with the game on the line or bursts in front of a defender for a charge.

And it's in his personality, his natural joy for life revving up teammates and fans on the court, lifting the spirits of everyone he meets off it.

“He has such a positive way about him that's infectious to everyone around him,” Sun Devils coach Bobby Hurley said.

Martin, whose full name suggests a top-shelf after-dinner drink, was in fact named after an uncle. He came to Arizona State as a star recruit and quickly became a favorite, with fans delighting in his game that was more spicy rum than cognac.

Playing as if every bounce of the ball were his last, Martin burst off the bench as a momentum-changing sixth man as a freshman.

The 6-foot guard played with a confidence beyond his years, flicking no-look passes, fearlessly driving to the basket. He picked up opposing point guards full court, nodding his bouncy hair in approval after inevitably finding a way under their skin.

Martin still plays with the same this-could-be-the-last-play abandon as a junior, though has morphed into a level-minded floor leader to balance Hurley's volcanic sideline demeanor.

Martin has range that extends practically to Phoenix's Sky Harbor Airport and, with a 40-inch standing vertical leap, has the hops to finish at the rim against much bigger players. He's the rare guard with a sublime mid-range game, usually stopping and popping while the defender is still in mid backpedal, and is one of college basketball's fastest end-to-end players with a ball in his hand.

The point guard for two national championship teams at Duke, Hurley has given Martin the freedom to do things other coaches would wince at, like the one-footed fadeaway he shoots multiple times a game.

“I've worked hard at being able to score at multiple levels,” Martin said.

With his 24-point performance in a one-point, comeback win over rival Arizona, Martin became the first Pac-12 player in 23 years to start conference play with six straight 20-point games.

Martin became the second player in Arizona State history (Shannon Evans in 2018) to be named the Oscar Robertson National Player of the Week for his big Bay Area efforts.

The Pac-12's second-leading scorer at 19.1 points per game, Martin is a front-runner for conference player of the year in what could be a two-player race with Oregon's Payton Pritchard. He's has been the key cog during a seven-game winning streak that moved Arizona State, a team picked to finish sixth, to the top of the Pac-12 standings with two weeks left in the regular season.

“Remy Martin, what he's done at Arizona State is remarkable. He's a heck of a player,” Arizona coach Sean Miller said, unprompted. “He's willed them to so many wins. Not only do I think he's one of the best players in the Pac-12, he's one of the best guards in college basketball.”

Through a joy for life and sincerity, he forges an instant bond with anyone he meets. Fans and kids who meet him in person usually decide Martin is now my favorite ASU player.

His mother, Mary Ann Macaspac, emigrated from the Philippines and Martin has embraced his heritage. He wears a wristband with the Philippines flag on it and serves as a role model for young Filipino basketball players, showing them there is a path to success.

Right after hitting the game-winner against Southern California on Feb. 8, Martin gave his shoes to a young boy who gleefully carried the oversized sneakers in his arms up into the stands. Another Remy Martin fan for life.

When his team won the 10-11-year-old championship at Hurley's camp, Martin celebrated like he won the national championship, jumping with the players before galloping off with one in his arms.

“I love living, I'm happy, I'm not taking anything for granted,” Martin said. “I'm living, I'm healthy, I'm playing the game I love, so how can I not be happy?”

Now, about that hair.

Close-cropped on the side, it bursts out of the top his head in an overrun bouquet of curls and swirls. When Martin is going at full speed, which is nearly all the time, his locks bob and sway as if he's being electrocuted, making it look like he's playing even harder than he is.

The upkeep, minimal. Martin usually climbs out of bed, does a quick check and heads out the door.

“I'm usually getting out of bed to head to practice,” he said. “It's not like I'm going to a club or something, so there's not much that needs to be done.”

Even so, ebullient every time.