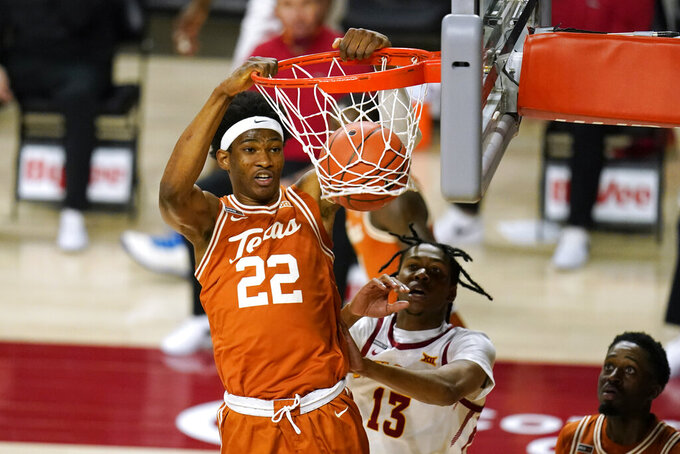 AMES, Iowa (AP) — Texas coach Shaka Smart liked what he saw from Kai Jones against Iowa State, and he said he'll need to see more of it if the Longhorns are going to be successful in the postseason.

The 6-foot-11 sophomore came off the bench to score a season-high 17 points and lead four Texas players in double figures in the 15th-ranked Longhorns' 81-67 win Tuesday night.

“I thought this was one of his best games, just with his activity and energy on both ends of the floor,” Smart said.

Jones made 4 of 7 shots from the field and hit a career-best 9 of 10 free throws. He also had eight rebounds, three steals and two blocks.

“He had some plays tonight where he really played with great maximum effort, and when he does that, he's really, really special as a player,” Smart said. “I'm happy for him that he's kind of coming to this realization of who he can be. He's really just scratching the surface. We need this type of energy and multiple efforts from him as we go here in March.”

Courtney Ramey added 14 points for the Longhorns, and Greg Brown and Matt Coleman III each had 12.

The Longhorns scored the first eight points and broke things open with a 17-0 run that put them up 28-13.

The Cyclones made just 4 of 15 attempts from 3-point range before the break.

Ramey’s 3-pointer early in the second half made it 51-37. The Cyclones pulled within eight points late, but Texas went 6 for 6 at the free-throw line in the final minute and scored eight of the last 10 points.

The teams combined for 26 turnovers in the first half, with Iowa State committing nine in the first 10 minutes. Texas turned it over 19 times for the game.

“Nineteen turnovers is way too many,” Smart said. “I told our guards they have to lead the way with taking care of the ball.”

Texas: The Longhorns kept alive their slim hopes of being a No. 2 seed in next week’s Big 12 Tournament.

Iowa State: The Cyclones, who finish the regular season with two road games, have not gone winless in league play since finishing 0-10 in the Bix Six Conference in 1936-37.

Texas' Jase Febres played his best game since returning from major knee surgery. He scored a season-high nine points on 3-for-4 shooting from 3-points range and also had two rebounds and an assist in 21 minutes. Febres had been injured last March and was playing his eighth game.

“This has been the hardest thing hands-down I've had to go through,” Febres said of his comeback.

Texas visits No. 16 Oklahoma on Thursday and ends the regular season at TCU on Saturday.

Iowa State visits No. 18 Texas Tech on Thursday and plays at Kansas State on Saturday.