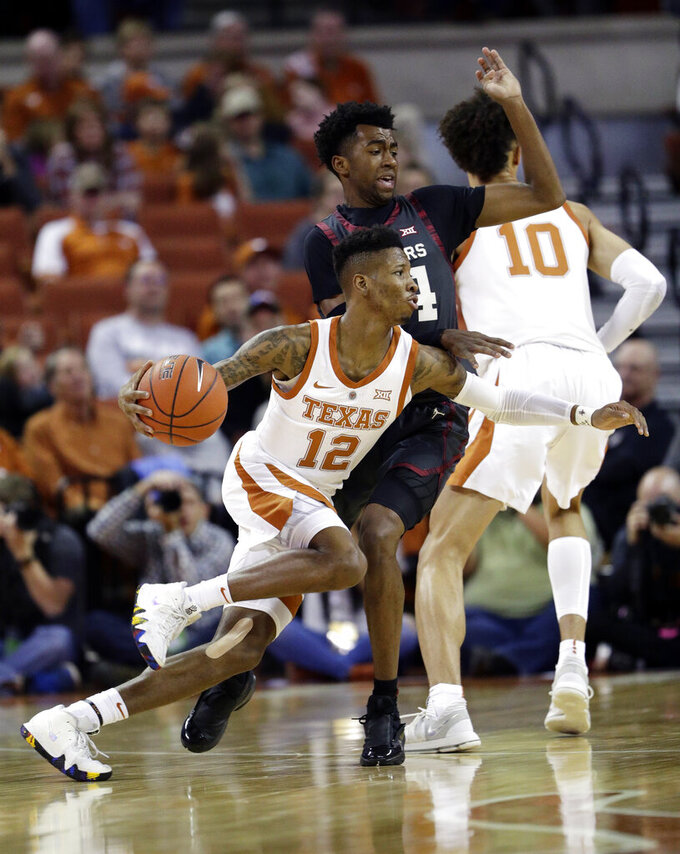 AUSTIN, Texas (AP) — Texas senior guard Kerwin Roach II played like he had a lot to make up for.

He did. And he delivered.

So did the Longhorns with a tough 75-72 win over rival No. 20 Oklahoma on Saturday night that keeps Texas near the top of the standings in what is looking like a wild season in the Big 12.

Roach scored 23 points in a rebound effort after a loss at Kansas in which he got out of position on the final play and the game was lost with a wild shot at the end. Against Oklahoma, Roach attacked early and delivered late with baskets that rallied Texas when it looked like the Sooners would pull away.

"It's definitely a game to get back on track," Roach said. "Any win is an atonement game."

"We ask a lot of (Roach). We ask him to guard the other team's best offensive perimeter player. We ask him to score a lot and come off and create for other guys," Texas coach Shaka Smart said. "He showed toughness, and that's what you want from your senior guys."

Coleman gave Texas a 70-69 lead with two free throws, and Oklahoma came up the court with a chance to retake the lead before Christian James made a critical turnover by bouncing the ball off his foot and out of bounds.

Jase Febres made a 3-pointer with 32 seconds left that Oklahoma's Jamal Bieniemy answered on the other end 10 seconds later — the ball hit just about every part of the rim — to keep the Sooners within one.

The Sooners had chances to take the lead or tie in the final seconds but missed three 3-pointers. Hayes made a free throw, then partially blocked one of Oklahoma's last desperate shots to tie.

Texas was 20-of-25 shooting free throws, with Coleman and Hayes making four over the final 1:04 to give Texas the lead and protect it late.

James scored 20 points for the Sooners (13-5, 2-4). Rashard Odomes and Bieniemy each scored 11 points for Oklahoma.

Oklahoma: After their great start to the season, the Sooners have found life in the Big 12 much tougher with their fourth loss in six games and second in a row. The Sooners had battled back from a 10-point deficit to take the lead in the second half, but the late turnover and a missed 3-point attempt by Bieniemy with the Sooners still within two were costly.

"The value of possession, the later in the game, the more critical it is. Big 12 games are going to be like that," Oklahoma coach Lon Kruger said. "That's the way the league is. It's tough every night."

Texas: The Longhorns finally won a close one. Texas had lost six games by six points or less, meaning those games came down to just one or two possessions that the Longhorns couldn't convert or get stops at the end. That changed with clutch free-throw shooting late and the luck of the Oklahoma turnover. Febres knocking down a 3-pointer off a sharp pass from Coleman was a dagger.

HAYES IN THE CLUTCH

Hayes has been making the Texas highlight reels with his dunks and blocks, and has been getting some buzz as possibly the Longhorns' next one-and-done NBA-bound power forward.

His free-throw shooting has been unflappable. Hayes is 18 of 22 from the line in Big 12 play and was 7 of 8 against the Sooners. His miss could have been a big one. It came with 10 seconds left and kept the Sooners within three. He made up for it a partial block on the Sooners' final 3-point attempt.

"He's getting better and better," Smart said. "He's doing a lot of things he couldn't do when he first got here."

Oscar-winning actor Matthew McConaughey sat on the Texas bench and gave the pre-game pep talk in the locker room. McConaughey is an investor in Texas' plans for a new privately built basketball arena and has been given the honorary title of "Minister of Culture" for the program.

McConaughey has been known to get riled up at Texas football games, but was mostly quiet Saturday. At one point, he waved to the Texas players to get out of their seats to cheer after a basket by Roach had reclaimed the lead for Texas with about eight minutes left.

"He dared us to play for each other tonight," Osetkowski said.

McConaughy's burnt orange suit was an even bigger hit.

"That was high level," Smart said. "I would love to get one of those. He said he got it overseas. He's got some connections I don't have."

Oklahoma plays at its bedlam rival Oklahoma State on Wednesday.

Texas plays at TCU on Wednesday.