Rose leads Temple to upset of No. 16 Wichita State 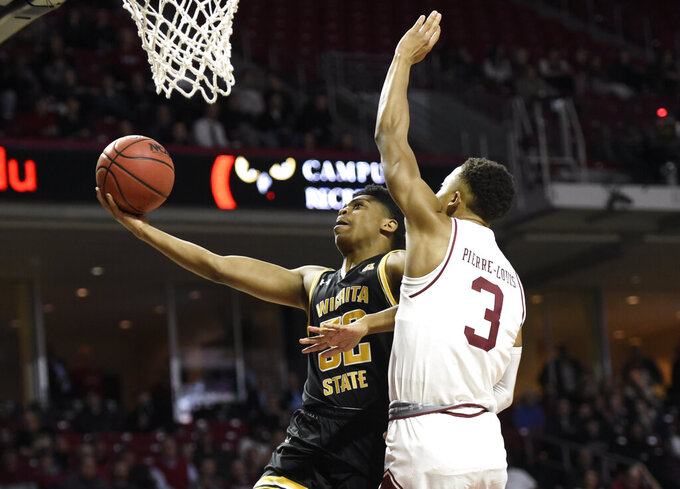 Wichita State's Grant Sherfield (52) drives to the basket past Temple's Josh Pierre-Louis (3) during the first half of an NCAA college basketball game Wednesday, Jan. 15, 2020, in Philadelphia. (AP Photo/Michael Perez) 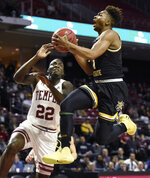 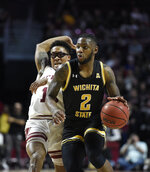 Quinton Rose scored 19 points and the Owls used a strong defensive performance to upset No. 16 Wichita State 65-53 on Wednesday night.

Jake Forrester and Monty Scott each chipped in 11 points for the Owls (10-6, 2-3 American Athletic Conference), who snapped a three-game losing streak while defeating a ranked opponent for the 13th consecutive season.

“Coach always wants us to be aggressive and pressure the ball,” Scott said. “We do that against every team, but we knew today playing a ranked team we had to be more aggressive than usual.”

James Echenique scored 20 points and Jamarius Burton added 16 for the Shockers (15-2, 3-1), who had won nine straight.

“We wanted those guys to feel us all game long; it’s tiring,” McKie said. “Our guys were active. We wanted to push their offense out some. We forced them to have to do something different offensively.”

“They do a really good job of getting those guys shots, and we were well aware of that,” McKie said. “We wanted to use our length and athleticism against those guys, make them put it on the floor and play in a crowd.”

The Owls opened the second half on an 11-0 run over the first 4:06, going up 37-32 on Nate Pierre-Louis’ jumper with 15:54 left. Wichita State missed all four of its field-goal attempts, and Temple forced the Shockers into four turnovers during the stretch.

“They turned it up in the second half and we remained in our slumber,” Wichita State coach Gregg Marshall said.

Temple, helped by getting in the bonus with nearly 11 minutes left, kept control from that point. The Owls went up by as many as 10, 55-45, on Forrester’s layup with 4:26 left. Temple’s defense kept the Owls in control, and they clinched the win on Rose’s driving layup that made it 61-53 with 1:39 remaining.

The Shockers jumped to an early lead behind consecutive Burton 3-pointers and were up by as many as nine, 21-12, after a pair of Echenique free throws with 9:53 left in the first half.

The Owls got as close as within 28-26 on Rose’s second straight two-point jumper with 3:02 left before intermission. But the Shockers scored the final two buckets of the period, on layups by Trey Wade and Morris Udeze, to lead 32-26 at the break.

But the Shockers couldn't get on track after halftime.

“When those guys turned (Burton’s) water off, no one else could make a shot,” Marshall said.

After falling behind early, Temple used a 1-2-2 three-quarter court press to limit Wichita State’s offense for much of the first half to close the gap.

The Owls didn’t use much press in the second half but didn’t need to after wearing down the Shockers in the opening 20 minutes.

“Our guys were active,” McKie said. “We wanted to push their offense out some. We forced them to have to do something different offensively.”

Marshall knows the Shockers need to shake this performance from their system – and quickly.

“I hope we can figure it out,” he said. “We have to play better than this Saturday (against Houston) or we’ll lose again.”

Wichita State: The Shockers still are in first place in the conference and will try to get back on track on Saturday against Houston.

Temple: The Owls avoided falling into a last-place tie with Central Florida in the 12-team league. They’ll try to pull out of the middle of the pack on Saturday at SMU.

Temple: At SMU on Saturday.