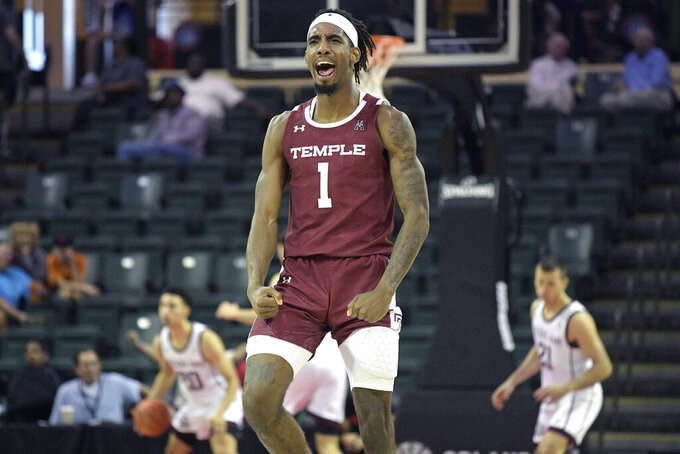 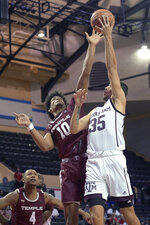 LAKE BUENA VISTA, Fla. (AP) — Quinton Rose scored 19 points and Temple used an 11-0 second-half run to pull away from cold-shooting Texas A&M for a 65-42 victory in the Orlando Invitational on Friday.

Alani Moore II had 14 points and Monty Scott finished with 11 for the Owls (5-1), who rebounded from a seven-point loss to fifth-ranked Maryland to advance to the fifth-place game of the eight-team tournament at Disney World.

Typically, this time of year your defense is a little better than your offense, but at some point you have to start making more open shots and we certainly got some looks,” Temple coach Aaron McKie said.

“Last night we hurt ourselves a lot because we didn’t share the ball as much as we should have,’’ McKie said. “We made a conscious effort to try and come out today and make one more pass and make our teammates better. I thought we did a pretty good job.”

Josh Nebo was the only Texas A&M player in double figures with 12 points.

“Other than the last three minutes of the second half, I thought our fight was much better,” Aggies coach Buzz Williams said. “Lowest number of turnovers thus far this season, highest number of offensive rebounds this season. And I think in an unspoken way, those are byproducts of how hard we were fighting.”

Temple: Rose bounced back after he and Owls leading scorer Nate Pierre-Louis shot a combined 4 of 23 in Thursday’s loss to Maryland. Pierre-Louis, however, had another subpar game after missing all seven shots he took against Maryland and finishing with three points. The junior guard was 3 of 7 for eight points against Texas A&M, including 0 for 3 on 3-pointers.