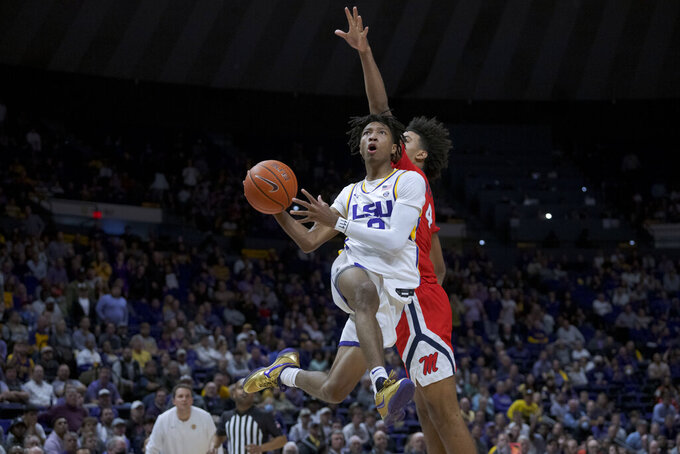 BATON ROUGE, La. (AP) — Mississippi had a 24-point lead in the first half and Daeshun Ruffin scored 19 points before leaving the game with a right leg injury with 12 minutes left.

Then Ole Miss went cold from the floor, scoring only on free throws for nearly 10 minutes and watching its lead get trimmed to two in the final minutes. But the Rebels still held off a reeling No. 25 LSU 76-62 on Tuesday night.

Luis Rodriguez scored 15 for Ole Miss (12-10, 3-6 Southeastern Conference), which got its third victory in four games following a four-game skid in mid-January.

“We can definitely learn from this and I think we’re in a good spot,” Rodriguez said. "If we can keep stacking wins, keep playing for each other, keep playing hard and keep being a good practice team and doing what we have to do, I think we can make something happen. Definitely, I like where our team’s at right now.”

Darius Days scored 21 points, including five 3-pointers, for LSU (16-6, 4-5), which has lost five of their last six and slid down the national rankings since starting 12-0. Tari Eason and Eric Gaines each scored 16 for the Tigers.

Jaemyn Brakefield's breakaway layup with 10 seconds left was the Rebels' only field goal in the last 9:50 of the game. The Rebels hit eight free throws during that stretch, however, including a pair each by Nysier Brooks and Tye Fagan in the last 1:05. Those came after Eason's 3-pointer with 1:27 left had pulled LSU to 69-67.

“This team found a way to win,” Ole Miss coach Kermit Davis said. "It wasn’t pretty at times, but they never stopped competing. I’m really happy for them and that’s a happy locker room.”

“Give Ole Miss credit. We had a difficult time guarding the ball and guarding Ruffin," LSU coach Will Wade said. "Brooks was a major issue for us down low, we ended up having to foul him a ton. Rodriguez did a nice job hitting some critical 3s. Difficult, difficult loss for us, but we have to get off the mat and get ready to go.”

Ole Miss looked to be on its way to a rout in the first half, taking a 20-point lead at 36-16 when Rodriguez stole Xavier Pinson's pass and ran free for a breakaway dunk. Shortly after, Austin Crowley's 3 made it 39-16 with 6:42 to go in the opening half

“Ruffin controlled the game early on. It just took us too long to settle in," Wade said. “Disappointing night for us because we were not able to settle in and find a way.”

Ole Miss took its largest lead — 24 points — with a 3 by Rodriguez, which came on the heels of Brandon Murray's turnover.

But LSU suddenly made a game of it, closing the half on a 13-2 run.

Eason's steal and thunderous one-handed dunk gave LSU 11 straight points and re-engaged the crowd as the Tigers drew to 43-30 with 1:51 left in the half. LSU finished the half down 45-32.

Days then opened the second half with a pair of 3s, sandwiched around Eason's block on Matthew Murrell at the rim, to make it 45-38 with nearly 19 minutes still remaining, setting up a tense and competitive second half.

Ole Miss: Appears to be playing some of its best basketball in the heart of its SEC schedule, but if Ruffin's injury proves serious, that could stunt the Rebels' momentum.

“I think Daeshun is going to be okay despite the fact he couldn’t finish the game,” Davis said, noting Ruffin is scheduled for an MRI of his injury on Wednesday.

LSU: Is getting healthier with Pinson back from his knee sprain, and the Tigers' athleticism is not in doubt. But their unreliable shooting, including missed layups and putbacks, and seemingly avoidable turnovers in crucial situations are making it hard for them to win consistently in the SEC. This could be their final week in the rankings if they don’t respond this weekend.

“We did a great job on the offensive boards,” Wade said. “We just have to finish some of those. We did not do a good enough job finishing those.”

Mississippi: Visits Florida on Saturday, seeking a regular-season sweep of the Gators.

LSU: Visits Vanderbilt on Saturday for their only regular-season meeting with the Commodores.