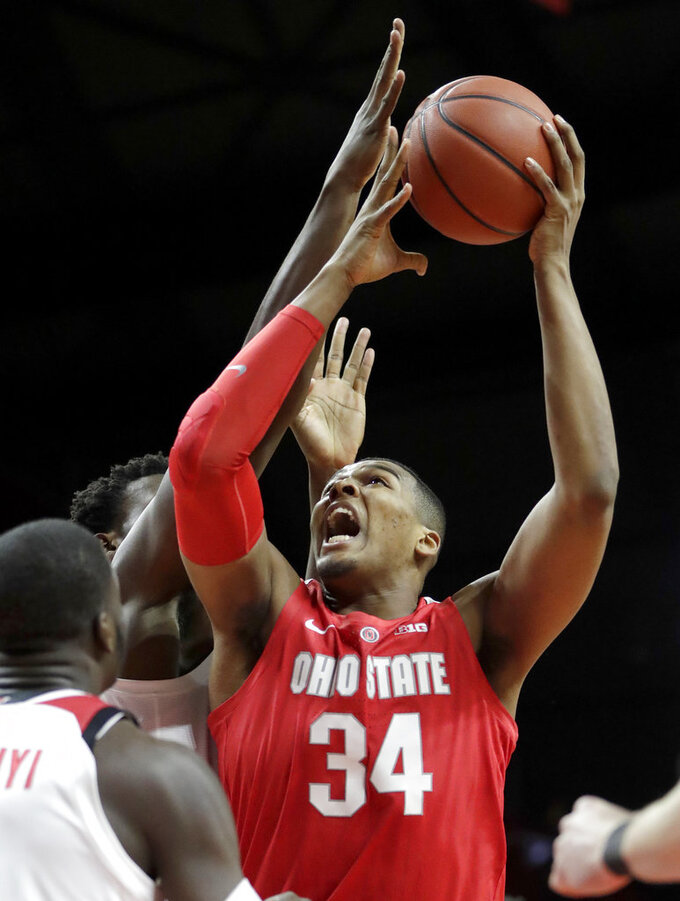 Ohio State forward Kaleb Wesson (34) goes up for a shot against Rutgers during the first half of an NCAA college basketball game, Wednesday, Jan. 9, 2019, in Piscataway, N.J. (AP Photo/Julio Cortez) 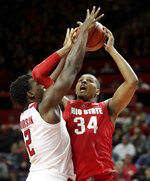 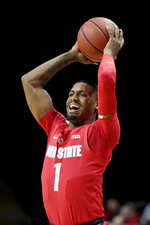 PISCATAWAY, N.J. (AP) — Rutgers may not be the doormat of the Big Ten Conference anymore.

Montez Mathis hit two contested layups and Geo Baker nailed a jumper with 10.3 seconds to play as the scrappy Scarlet Knights posted their biggest conference win under coach Steve Pikiell, a 64-61 decision over No. 16 Ohio State on Wednesday.

"This is a big win for us, a building block win for us," freshman guard Ron Harper Jr. said. "Until today we hadn't beaten a Big Ten team and today we beat a ranked Big Ten team. So this is a building win for us and expect the Scarlet Knights to be taking steps forward from now on. We don't look to turn back from this."

The win was the Scarlet Knights' first against a ranked Big Ten team since an upset of No. 4 Wisconsin in January 2015 under then-coach Eddie Jordan. Their last win against any ranked team was last year when they beat No. 15 Seton Hall at home.

This was a gutsy win, too. Rutgers (8-6, 1-3) blew a 10-point second-half lead, fell behind by three and scored the final six points to hand the Buckeyes (12-3, 2-2) their second straight loss. They also did it with leading scorer Eugene Omoruyi sidelined for most of the game after hurting his left leg after seven minutes.

"We got through a ton of obstacles today," said Pikiell, whose team won six conference games in his first two seasons in posting two last-place finishes. "To get that win is a huge confidence booster going forward."

Ohio State had a chance to force overtime, but C.J. Jackson's open 3-pointer hit the rim.

"Did love our last look," Ohio State coach Chris Holtmann said. "I did love that one. That was about the only good look."

Mathis finished with 16 points and Baker had 15, with his last shot being his only second-half basket. Harper added 12 points and Shaq Carter, who got more time with Omoruyi out, had 11.

Muhammad added 13 points for Ohio State and Jackson had 10.

Mathis snapped an almost seven-minute field goal drought with his drive that got Rutgers within 61-60 with 1:47 remaining. Forty seconds later, he gave the Scarlet Knights the lead with a runner in the lane. Baker made his jumper after a turnover by Ohio State.

Wesson was a one-man show to start the second half. He scored the Buckeyes' first 10 points after intermission to give Ohio State a 40-38 lead. He missed the free throw after scoring inside and Rutgers suddenly rediscovered its game.

Ohio State: The Buckeyes could easily fall out of the AP Top 25 after this latest setback.

"I want to begin by giving Rutgers credit," Holtmann said. "I thought they played aggressive, physical and beat us to more loose balls. We've got to find a way to coach better and play better."

Rutgers: Omoruyi hurt his left leg with 12:58 left in the first half and was ruled out a short time later. Medical personnel seemed to be looking at his kneecap. If he is out any length of time, it will hurt. There was no update on his condition after the game. Sophomore guard Peter Kiss, who has struggled lately, did not play.

Ohio State: At Iowa on Saturday.

Rutgers: At Minnesota on Saturday.