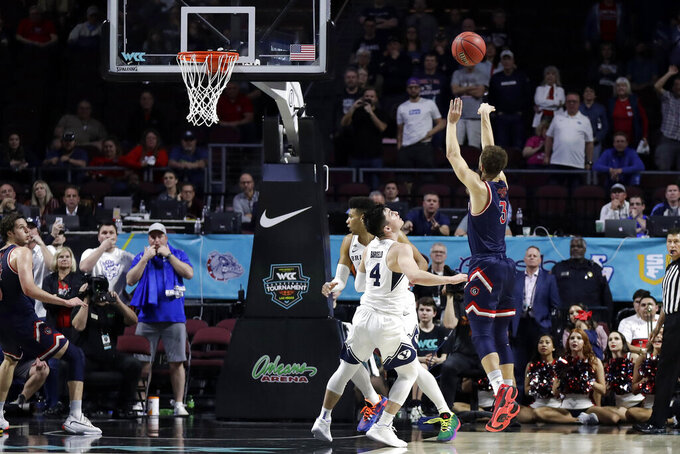 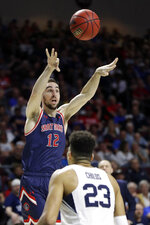 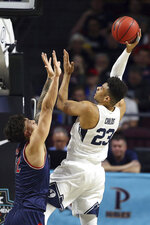 LAS VEGAS (AP) — Jordan Ford knew he was getting the ball. Everyone in the Saint Mary’s huddle told him to attack the basket with the game on the line.

He chose a jumper instead, and it turned out to be the right choice.

Ford hit a pull-up with 1.4 seconds to go, giving the Gaels a 51-50 win over No. 14 BYU in the West Coast Conference Tournament semifinals Monday night.

“We kind of cleared it out for me,” said Ford, who averages 21.2 points per game. “In my head I was thinking, get to a jumper and get the guy reeling a bit. Stopped on a dime and shot it.”

Saint Mary’s will face No. 2 Gonzaga for the championship on Tuesday. The Gaels upset Gonzaga in last year's title game to earn the league's automatic bid to the NCAA Tournament.

The conference’s leading scorer, Ford had 12 of his 18 points in the second half for third-seeded Saint Mary’s (25-7), which is looking to win its fifth WCC title and fourth under coach Randy Bennett.

On the decisive play, Ford had BYU guard Alex Barcello defending him at the top of the key. Ford dribbled to his right and pulled up on the wing from 17 feet. The senior guard shot 5 of 9 in the second half after a 2-for-6 start.

“I liked the matchup,” Ford said. “He was a little bit of a smaller defender, so I was able to get the shot up and get a clean look.”

Yoeli Childs had 23 points and 10 rebounds for second-seeded BYU (24-8), which had won nine straight games. The Cougars last played on Feb. 29 against Pepperdine.

“They were very physical,” Childs said. “I think it’s going to make us better. We’re going to take that, learn from it and move on to the next one.”

Saint Mary’s clamped down on defense in the second half. BYU went 9:13 without a basket and missed seven shots in a row during one stretch. The Gaels went on a 12-1 run and led 46-45 with 5:38 remaining.

“That was definitely the reason why we won tonight,” Gaels forward Malik Fitts said. “Clearly our offense wasn’t there, but a lot of guys stepped up.”

But the Gaels had a 4:14 scoring drought of their own, which allowed the Cougars to keep it within one. Despite missing 13 of their next 15 shots, BYU took a 48-46 lead with 3:31 left on a three-point play from guard Zac Seljaas.

It was the Cougars’ first field goal since 12:44 remained in regulation.

“I think they did a good job taking us out of what we normally do,” Toolson said. “They were very physical with us and made us play 1-on-1. Moving forward we need to share the ball and play with more force to get those shots that we’ve gotten all season long.”

The Cougars missed 15 of their final 17 shots.

Despite shooting 8 for 28 in the first half with no free throw attempts, Saint Mary’s trailed only 26-20 at the break. The Gaels were outrebounded 17-15 in the period but had five offensive rebounds.

Fitts, averaging 16.9 points and 7.1 rebounds this season, had only nine points on 2-of-13 shooting to go with eight boards. But he scored with 1:25 left to make it 50-49 and then blocked a potential dunk by Childs with 1:05 remaining to keep the BYU lead at one.

Ford scored 42 points and played all 50 minutes in Saint Mary’s 89-82 double-overtime victory against Pepperdine in the quarterfinals Saturday. He played 34 minutes on Monday. Bennett sat Ford for the final five minutes of the first half.

“I think we were preoccupied getting him the ball,” Bennett said. “We weren’t playing well offensively. I thought he could use a rest, and I think it helps getting guys involved.”

When the Gaels won the WCC Tournament last season, they lost to Gonzaga by 48 and 14 points during the regular season before winning in the finals by 13. This season, Saint Mary’s lost by 30 and 10 points against the Bulldogs.

BYU: Expecting an at-large bid to the NCAA Tournament on Sunday.