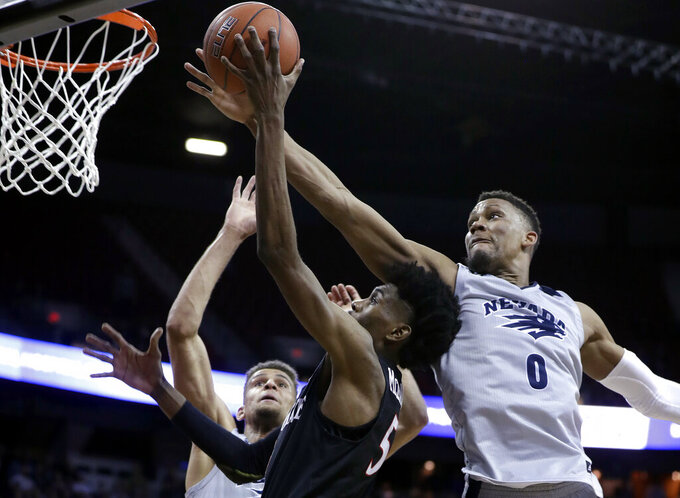 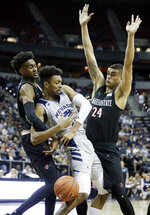 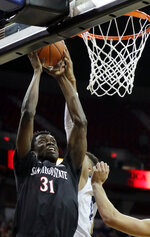 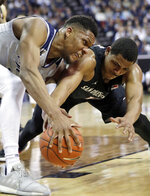 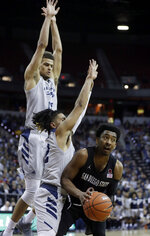 But this time against San Diego State and without starter Jordan Caroline, the No. 14 Wolf Pack ran out of gas with seven minutes left Friday night.

Devin Watson had 20 points and five assists and San Diego State held Nevada scoreless for a late 7:06 stretch a 65-56 victory in the Mountain West Conference semifinals.

Jalen McDaniels added 12 points and 10 rebounds for fourth-seeded San Diego State (21-12). The Aztecs will play the Fresno State-Utah State winner in the championship game Saturday at the Thomas & Mack Center.

"We're playing good basketball right now," San Diego State coach Brian Dutcher said. "What that means for tomorrow, I don't know. And if we do enough right things, we'll give ourselves a chance to make it back to the NCAA Tournament again."

San Diego State also had a home victory over Nevada on Feb. 20, but lost to the Wolf Pack in Reno last Saturday.

"It was not revenge," Watson said. "I feel like every time we match up with Nevada it's going to be a great game and the fans love it. They play hard and they're a competitive team. We actually like playing them."

Cody Martin led the top-seeded Wolf Pack (29-4) with 16 points and six rebounds, and Tre'Shawn Thurman had 11 points and 11 rebounds as Nevada awaits word on an NCAA Tournament berth.

Caroline, averaging 17.3 points and 9.6 rebounds, did not play due to an injury.

"Caroline was held out for precautionary reasons," Nevada coach Eric Musselman said. "It's been a long season. He's got a lingering injury and that's what it is."

Dutcher made a few adjustments.

"Well, obviously, we were a bit surprised when Caroline wasn't in the lineup," he said. "But it's like anything else. It's a wounded animal. We knew they were dangerous anyways."

Nevada responded with an 18-4 run that included Caleb Martin's first point and first field goal, a 3-pointer with 12:01 left. Nevada took the lead on Cody Martin's fast-break layup with 10:02 left.

"We just hung in there," Dutcher said. "So every time we play them, it's a back-and-forth affair. No matter what kind of run they were on we kept looking at the scoreboard, it was a two-point game. So it wasn't like they ran out on us by 11 points."

Nevada's Caleb Martin committed two fouls in the first 1:04. He did not score in the half, only playing four minutes. There were eight lead changes and the game was tied for 6:17 of the first half before the Aztecs created a little distance at intermission.

"I had two all-league players not play in the first half. I thought our effort was phenomenal," Musselman said. "I think our record speaks for itself, the body of work in the non-conference, conference play. Unfortunately, we weren't fully healthy tonight."

San Diego State: The Aztecs reached the MWC semifinals for the 12th consecutive season. They are 4-0 against Nevada in neutral-site games. San Diego State has won 23 straight games holding opponents under 60 points. With the 20th win of the season, the Aztecs have reached the mark in 13 of the past 14 seasons.

Nevada: The Wolf Pack's 58 wins the past two seasons is their best in team history. The Wolf Pack are 2-4 against Dutcher.