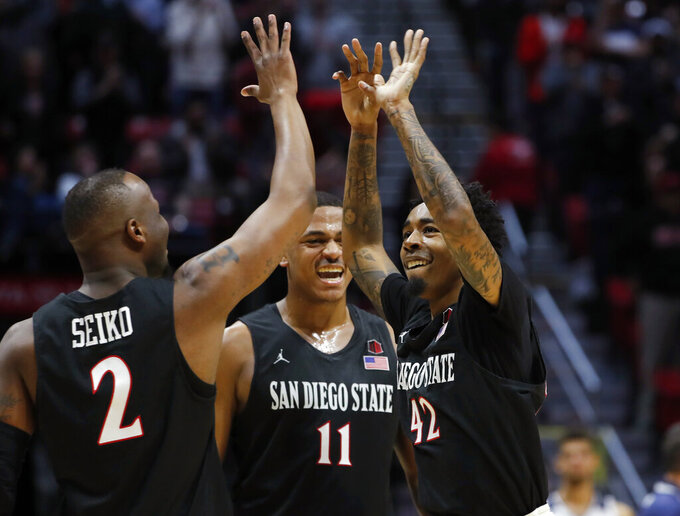 SAN DIEGO (AP) — With their arena packed for the first time this season, the San Diego State Aztecs rewarded the fans with yet another victory against Nevada, and this one's going into the record book.

It was the highest ranked team that SDSU had ever beaten.

"That environment was incredible," coach Brian Dutcher said. "It reminded me of a few years back. It was good to have the building packed liked that. We treated the crowd to an old-fashioned Aztec win. Defense and rebounding keyed it."

The Aztecs have three wins against teams that were ranked No. 7, most recently against BYU on Feb. 18, 1988.

Caleb Martin had 20 points for Nevada, which was held to its lowest point total this season. Their previous low was in its only other loss, 85-58 at New Mexico on Jan. 5. Since then Nevada had averaged 22 points per game.

A big key was taking Caroline out of his game.

Watson said Mitchell and Aguek Arop, who also helped guard Caroline, "are as tough as they come and they did a great job. They knew he likes to crash after every shot. I just tried to tell Matt on every play, 'Caroline is going to go in.' I think that helped to remind him to hit him every time he came in. And he did a good job."

Said Caroline: "It was a tough one. They played good and hats off to them. ... Mostly everyone we play, plays zone defense. So I think their man defense affected our offense a little bit."

On offense, "The kids shared the ball," Dutcher said. "They played the right way."

Dutcher said the Aztecs didn't run a set play in the second half. "We just ran high ball screen to a spread offense so we could spread the floor and drive. We opened up the driving lanes so we could attack the basket. It was working so we stuck with it."

Nevada coach Eric Musselman spent most of the night yelling at the refs.

As for the Wolf Pack, "We have to step up on a big stage and play. We've played in front of two really great crowds at New Mexico and here and we didn't play like we are capable of."

After trailing by 16 midway through the second half, the Wolf Pack pulled within single digits in the closing minutes.

McDaniels fouled out with 41.4 seconds to go and Trey Porter made one of two free throws to pull the Wolf Pack to 60-55.

Hemsley made a layup with 29.6 seconds left and Caroline then fouled out, with Hemsley making one of two free throws for a 63-55 lead.

The Aztecs, who are coming on strong for the second straight season, have handed Nevada three of its last five losses. They beat the Wolf Pack in San Diego in the regular-season finale a year ago and again in the semifinal of the Mountain West Conference tournament. That didn't keep the Wolf Pack from advancing to the Sweet 16, where they lost 69-68 to Loyola-Chicago, which went on to reach the Final Four.

Caroline didn't score until he had a put-back with 15:54 left to pull the Wolf Pack to 39-30. Cody Martin then made two free throws to pull within seven.

But Watson made a layup for SDSU, prompting fans to chant "OVER-RATED!" Jordan Schakel hit a long 3 to give the Aztecs a 44-32 lead and force Nevada to call timeout.

Caroline was called for a technical foul for tripping Watson, who made both free throws for a 52-39 lead with 9:03 to go. Caroline also had two air-ball 3-point shots in the second half.

San Diego State led 30-21 at halftime. Caroline and McDaniels (17.2-point average) were held scoreless in the first half.

Nevada: The Wolf Pack hadn't trailed in the last three games and in five of six but allowed Jeremy Hemsley's jumper less than two minutes in to fall behind 2-0. ... Nevada has been held to 57 or fewer points just six times in Musselman's four seasons, with the Aztecs doing it four times.

San Diego State: The Aztecs and Wolf Pack will meet again in the regular-season finale March 9 in Reno.