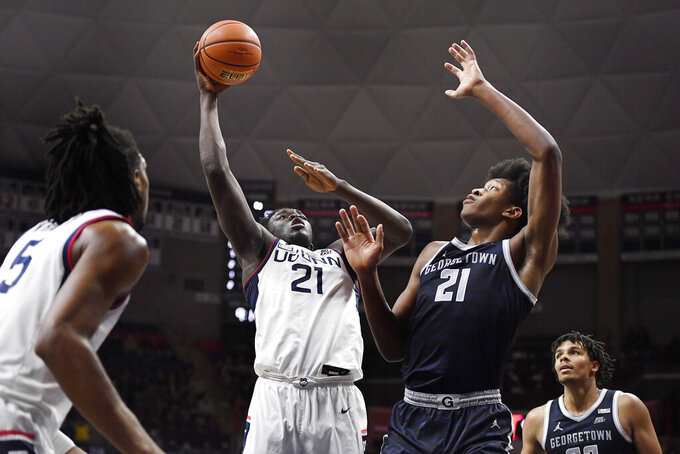 Connecticut's Adama Sanogo goes up for a basket as Georgetown's Ryan Mutombo (21) defends in the first half of an NCAA college basketball game, Tuesday, Jan. 25, 2022, in Storrs, Conn. (AP Photo/Jessica Hill) 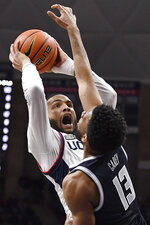 STORRS, Conn. (AP) — UConn coach Dan Hurley likes the way his team's offense has rounded into form after getting healthy and weathering a pandemic-related pause that stretched from December into January.

Isaiah Whaley and Jordan Hawkins each added 15 points for the Huskies (14-4, 5-2 Big East), who never trailed. R.J. Cole had 14 points, seven assists and six rebounds, while Tyrese Martin chipped in with 13 points.

UConn ran past the Hoyas, outscoring them 27-6 on the fast break and dominated the boards, outrebounding Georgetown 40-28,

“We got through the COVID pause; we're able to practice consistently; our team is healthy now," Hurley said. “We expect to play at a very high level.”

Freshman Aminu Mohammed had 15 points to lead Georgetown ( 6-11, 0-6), which lost its seventh consecutive game and sixth straight to start the conference season. Collin Holloway had 11 points and Donald Carey added 10.

UConn never trailed, but Georgetown stayed in the game early with some hot shooting. The Hoyas hit seven of their first 10 shots from behind the arc and were 8 of 12 from 3-point range in the first half. Mohammad had three of those and 13 of his points before intermission.

Donald Carey’s second 3-pointer of the half brought the Hoyas to within five points at 36-31.

But UConn shot 56% from the floor in the half. A 3-pointer from Martin gave the Huskies a 47-36 advantage, they took a 52-40 lead into halftime and scored the first five points of the second half to seize control of the game.

A 3-pointer from Hawkins gave Connecticut its first 20-point lead at 72-52 and the Huskies extended the advantage from there.

Martin said the Huskies are starting to see the work in practice translate to games.

“Just going against each other every day, It looks scary to see, when everybody's on fire and things like that, what we can do,” he said. “And today was sort of like that.”

UConn: There were fewer students than normal at Gampel Pavilion. The school capped capacity in the student section at 50% and asked students to voluntarily stay away, fearing the game could become a super-spreader event in advance of the upcoming move-in weekend for the spring semester. All fans are required to show proof of vaccination or a negative COVID-19 test before entering the arena.

This was the Huskies' second-biggest margin of victory in the series. Their largest came in a 94-70 win at home in 2004.

Georgetown's Jalin Billingsley came up lame late in the first half after scoring his only points on a layup and did not return. Ewing said Billingsley suffered a knee injury, but the severity won't be known until he can be examined.

PLAY OF THE GAME

UConn's Andre Jackson brought the crowd to its feet early by driving through the lane past several Hoyas before rising for a spectacular one-handed dunk over Timothy Ighoefe, which gave UConn a 7-5 lead.

Hurley said he expects to see that on some highlight shows.

“That should be a top-two, top three-play,” Hurley said.

Georgetown: The Hoyas continue their road trip at Butler on Saturday.

UConn: The Huskies travel to face DePaul on Saturday