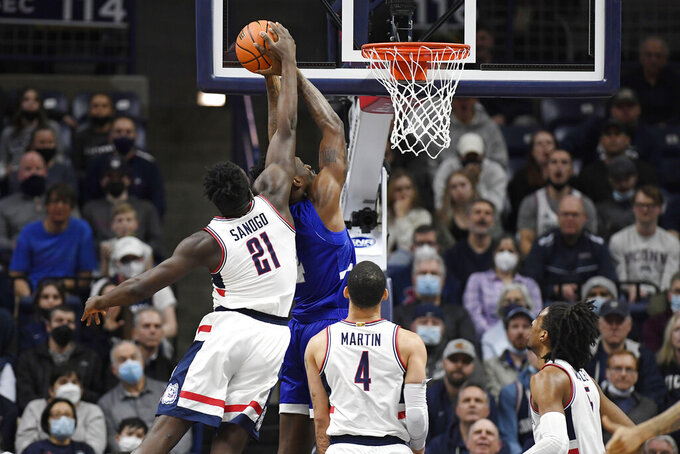 It was the sixth double-double of the season for Sanogo, the Huskies’ sophomore center. Tyrese Martin had 16 points and 10 rebounds for UConn (18-7, 9-5 Big East), while R.J. Cole added 16 points.

“When you have three guys playing at an all-conference level in a game, or throughout a season, you’re going to have a great season or a good chance of winning,” UConn coach Dan Hurley said. “Adama, R.J., and Tyrese all played like all-conference guys today.”

Seton Hall (15-9, 6-8) had won three of its last four games. Kadary Richmond, who had 27 points in the teams’ first meeting in early January, had 13 points. Jamir Harris added 15 points, Jared Rhoden had 14 points and Myles Cale scored 11 for the Pirates.

UConn missed its nine of first 10 shots from beyond the 3-point arc in the opening half. But Cole, Martin, and Isaiah Whaley each made 3s as UConn went on an 11-4 run to begin the half and take an eight-point lead.

Seton Hall got within three points at the 11-minute mark of the second half, but a pair of drives to the basket by Cole were part of a 6-0 UConn run that put it ahead 53-44 with 8:43 to play. The Pirates would get no closer than five points for the rest of the game.

“They destroyed us on the glass,” Willard said. “When you’re on the road and you’re playing in a great atmosphere, you can’t give as many second shots as we gave them.”

Thanks in part to a UConn defense that had three early blocks, Seton Hall missed 10 of its first 11 shots in the game.

UConn had a 28-27 lead at halftime, with Sanogo accounting for 12 points and nine rebounds.

“We’re a defensive team first. That’s where we set the tone, with defense and rebounding,” Martin said. “When we’re doing that a high level, I mean, it’s hard to beat us. And when you add the offense in like we did in the second half, it gets really hard to beat us.”

Seton Hall went 9-1 in nonconference play and is one of only nine teams in the nation with multiple wins over top-10 teams this season. For those reasons and others, Willard is relatively pleased with his team’s NCAA Tournament resume.

“We’re still in a great spot. I like where we’re at,” Willard said. “We’ve worked hard. We built up a lot of capital all year long.”

Hurley had been called for technical fouls in two of the Huskies’ four games entering Wednesday. Though often excitable, Hurley says he regrets drawing the ire of the officials like that.

After being called for a technical foul in the Huskies’ loss to Xavier on Feb. 11, Hurley called the officiating “a joke.” The Big East issued a statement the next day reminding Hurley of its restrictions against publicly criticizing the officials.

“I hadn’t had a technical this year until the Villanova game,” Hurley said. “I would say that my comments which I never should have made after the Xavier game about the officiating has created a narrative that has not been accurate this year.”

UConn has been at No. 24 in the AP rankings for each of the last two weeks. Another win this weekend should bump the Huskies up a bit next week.

Seton Hall: Point guard Bryce Aiken missed his eighth game in a row after suffering a concussion. The Pirates are 4-4 without him. “I would not expect him back any time soon,” Willard said.

UConn: Forward Akok Akok missed his fifth game in a row with a foot injury. Hurley said the junior could miss another week of action.