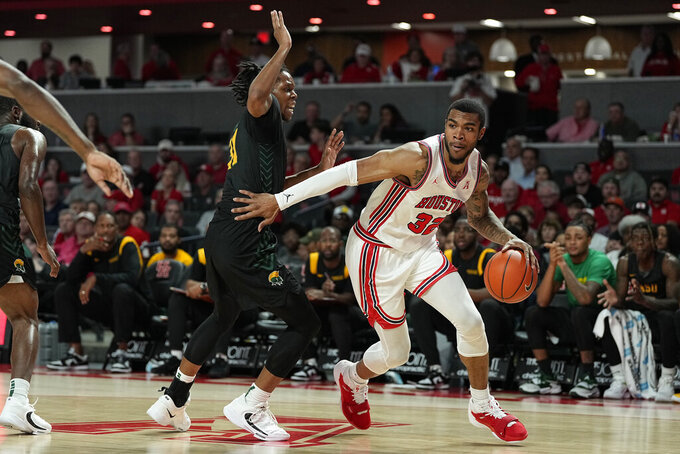 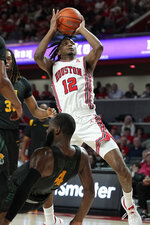 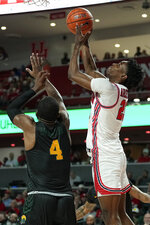 Houston, which was playing as the No. 1 team for the first time since March 14, 1983, donned its 1960s throwback uniforms. The Cougars played their first regular season home game ranked No. 1 since March 2, 1968.

Sasser finished 7-of-12 on 3-pointers, rebounding nicely after making only one of 10 from behind the arc in Houston’s win over Kent State on Saturday.

“He just needed to see one go in,” Houston coach Kelvin Sampson said. “Once he saw one go in, he saw another go in, and I said ‘They’re in trouble’. His shot selection tonight was unbelievable.”

Jamal Shead finished with 12 points and 11 assists, J’Wan Roberts had 10 points and Ja’Vier Francis had 11 points and eight rebounds off the bench. Houston had four players in double-figures scoring in the first half as they built a 54-20 halftime lead.

The Cougars shot 58% for the game, including 63% in the first half. Houston forced 16 turnovers, which they turned into 30 points.

“Our defense is always ahead of our offense early in the season,” Sampson said. “I never worry about our offense because I knew that once I started working on things like tonight, as soon as they popped into that zone, we were crisp. We knew exactly where the ball was going. The ball moved. We got inside out. The ball got reversed. We made extra passes.”

Kris Bankston scored 14 points and Cahiem Brown added scored 11 points for Norfolk State (5-3). The Spartans shot 35%, including 1-of-18 on 3-pointers.

“The reason why we’re good is that my ego doesn’t allow me to say because they’re No. 1 in the country, we’re supposed to lose,” Norfolk State coach Robert Jones said. “I feel like we’re supposed to win. And that’s what I preached to these guys, so this was embarrassing to me. It’s nothing like they’re No. 1 in the country, we’re a mid-major. No, we prepared to try to win, and it just didn’t go the way we wanted it to go. It’s embarrassing.”

Jones said the situation with the Cougars being ranked No. 1 and the “glitz and glamour” of playing in Houston’s arena might have played a role in the lopsided defeat.

“There’s a whole bunch of things going on, and you can almost psych yourself out of who you are because clearly, we are one of the best mid-majors in the country, but we didn’t show it today because we totally psyched ourselves out,” Jones said.

Norfolk State: The Spartans were overmatched throughout as Houston’s size and athleticism was too much. Norfolk State did well on offensive glass, grabbing 14 offensive boards but turned that into only eight points.

Houston: After needing a 6-0 run in the final minute to beat Kent State on Saturday, Houston left no doubt against Norfolk State, dominating from the start. Houston had 29 second chance points on 16 offensive rebounds and dished out 26 assists on 38 field goals.

“I don’t react to bad games or good games. I just don’t. I let the uninitiated do that. I’ve been coaching in five different decades. We didn’t play very good Saturday. Don’t throw it away, you get better that’s what you do.” –Sampson on rebounding after Saturday’s close win.

Houston: Faces St. Mary’s in Fort Worth on Saturday.