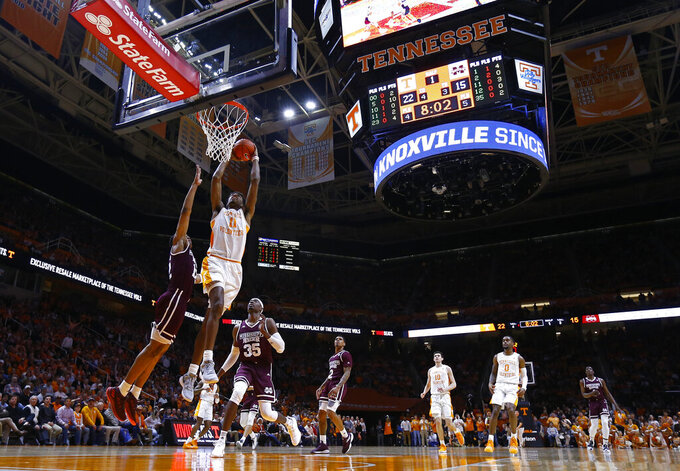 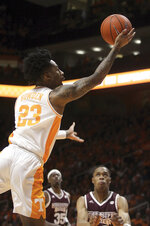 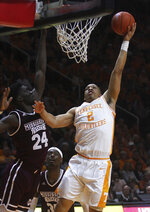 KNOXVILLE, Tenn. (AP) — Tennessee is regaining its defensive identity just in time for the postseason.

Tennessee held Mississippi State to its lowest point total of the season. Three days earlier, Tennessee trounced No. 6 Kentucky 71-52 as the Wildcats had their lowest single-game scoring output since a 64-48 loss to Vanderbilt in the 2013 Southeastern Conference Tournament.

"This is the time of year, where if you want to be a championship team, you've got to play championship-style basketball," Schofield said. "I think we did that for most of the night, for 40 minutes on the defensive end, but on the offensive end we have to be a lot more fluid."

Tennessee (27-3, 15-2) moved into sole possession of first place in the SEC, a half-game ahead of No. 10 LSU, which plays at Florida on Wednesday.

The regular season ends Saturday when Tennessee visits Auburn and LSU hosts Vanderbilt. If the teams finish in a tie, LSU would get the No. 1 seed in the SEC Tournament next week because it beat Tennessee in their only meeting.

Tennessee shared the SEC title with Auburn last season and is seeking to win back-to-back conference championships for the first time.

"They're a team that has a chance to go a long way in the NCAA Tournament this year, without a doubt," Mississippi State coach Ben Howland said. "They're very, very deep, skilled, tough, and really play well together."

Even as the Vols won 19 straight games and owned the No. 1 ranking for nearly a month, Tennessee players said they weren't playing the same type of suffocating defense that helped them win the league last year.

Tennessee leads the SEC in field-goal percentage defense, but the Vols believed they could improve. Because they were so much better on offense this season, they occasionally let their defense slack off.

Now they're back to stifling opposing offenses just the way they did last year.

"I think our guys truly understand (defense is) what we built our program on," coach Rick Barnes said. "We got away from it, and we needed to get back to it. I think they really realized that."

Schofield and senior classmates Kyle Alexander, Lucas Campbell and Brad Woodson each received a framed jersey in a pregame ceremony. Tears ran down Schofield's cheeks as the crowd gave him a standing ovation. Schofield and Alexander briefly spoke to the crowd after the game.

"It really wasn't a sad type of crying," Schofield said. "I was just more thankful and appreciative for everything."

Tennessee took the lead for good with a 10-0 first-half run that turned a 15-14 deficit into a 24-15 advantage. The Vols went on another 10-0 run early in the second half to extend their lead to 43-27, and they stayed comfortably ahead the rest of the night.

Mississippi State: Quinndary Weatherspoon entered the night as one of the SEC's hottest players, having scored at least 20 points in five of his last six games. But the SEC's second-leading scorer couldn't get anything going and ended up with more turnovers (eight) than points (seven).

Several dozen students sat through the national anthem and offered various chants during the game. The group left in unison during the first timeout of the second half, with many of them holding fists aloft. They were criticizing what they believe was the university's lack of action regarding a photo of Tennessee students appearing in blackface that circulated last week.

University officials have said they're still determining how to discipline the students who appeared in blackface.

Tennessee is at Auburn on Saturday.