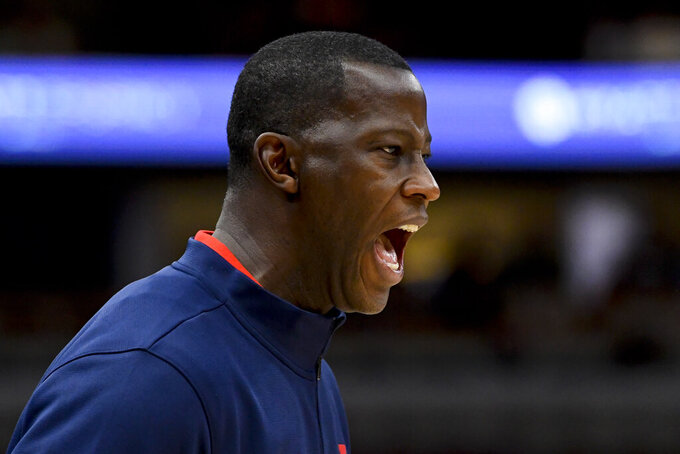 CHICAGO (AP) — D'Shawn Schwartz could not recall hitting a shot like this one, with his team trailing as the final seconds ticked away. And when the ball fell through the net as the buzzer sounded, it set off a celebration as wild as Colorado's overtime victory against No. 13 Dayton.

Schwartz nailed the winning 3-pointer as time expired, McKinley Wright IV scored a season-high 29 points against the team he initially planned to join and the Buffaloes stunned the Flyers 78-76 in overtime Saturday.

“It felt like I was in a game of NBA 2K,” Schwartz said. "It was surreal. I can't even describe it."

The Buffaloes (10-2) trailed by 14 in the first half, led by eight in the second and came away with the win after Obi Toppin hit a tying 3 in the final seconds of regulation for Dayton (9-2).

The Flyers were up 74-71 in overtime after a 6-0 run, but Schwartz drove past Toppin to put the Buffaloes back on top with 27 seconds left. After Jalen Crutcher's layup gave Dayton a 76-75 lead with 10 seconds remaining, Tyler Bey passed out of a double team in the post to an open Schwartz on the opposite wing for a 3 from the right side as the clock struck zero.

“When they doubled, I just knew I've got to get to that spot. I was wide open, as planned, and it just went in," said Schwartz, who got mobbed by teammates after hitting the winner.

Schwartz scored 20 points. Wright finished one point shy of his career high and grabbed 10 rebounds, helping the Buffaloes win their third in a row. The junior from Minnesota also heard it from Flyers fans upset he requested to be released from his letter of intent with Dayton in the spring of 2017 after former coach Archie Miller left for Indiana.

“I expected the boos," Wright said. "I told my teammates before we even came to Chicago that it was going to happen. I was getting DM's on Instagram about how much they hated me or whatever because I left. So I kind of knew what was coming. I texted my teammates this morning and told them that I needed this one personally, and they responded for me.”

Crutcher led Dayton with 19 points. Toppin scored 17, but the Flyers came up short after winning four straight. Both losses were in overtime, with Kansas beating them on Nov. 27.

“We've got a lot of room to grow, and I think we haven't reached our peak yet,” Crutcher said.

Colorado had dropped four in a row against Top 25 teams. The Buffaloes had not beaten an opponent ranked this high away from Boulder since knocking off No. 6 Missouri at the 1990 Big Eight Tournament in Kansas City.

Colorado was leading 64-61 when Toppin threw down a one-handed rebound dunk off his own miss with just under two minutes remaining in regulation. The Flyers had a chance to take the lead after Wright missed a driving layup and 3-pointer.

Crutcher banged his head on the floor as he missed a driving layup in the closing minutes, but no foul was called.

Instead, Dayton's Ryan Mikesell got called for one going for the rebound with 35 seconds left and Evan Battey hit one of two free throws. Another foul shot by Wright made it 66-63 with 13 seconds remaining. Toppin then popped to the top of the key for the tying 3 with six seconds left, and Wright missed a long heave, sending the game to overtime.

Colorado: The Buffaloes expect to contend for the Pac-12 championship, and they showed why.

Dayton: The Flyers have their highest ranking since they made it to No. 6 in December 1967. They figure to drop a few spots after this loss.