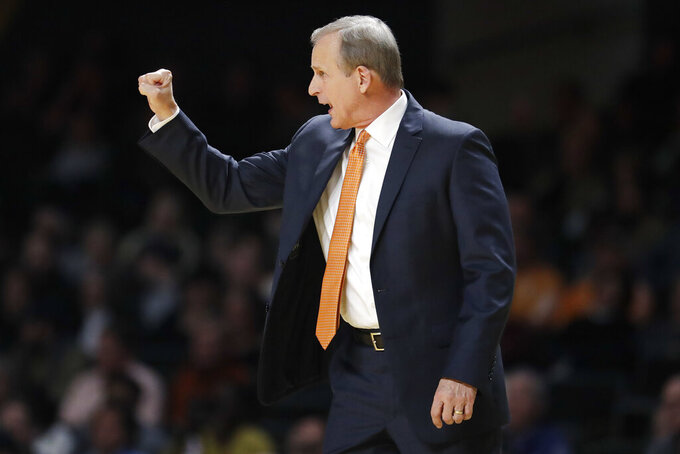 KNOXVILLE, Tenn. (AP) — Tennessee wanted to show this year that it had built a program strong enough to withstand the loss of three draft picks and remain a Southeastern Conference contender.

It hasn’t quite worked out that way as the reconstruction of Tennessee’s roster proved even more dramatic than expected. Not a single guy who started an NCAA Tournament game for Tennessee last season continues to play for the Volunteers.

“From a reality standpoint, we’ve had so many different times we’ve really had to start over and do different things to try to kind of plug the dike,” Tennessee coach Rick Barnes said.

Tennessee (12-9, 4-4 SEC) has lost three straight games to fall to 70th in the NET rankings, which are used as an evaluation tool in the NCAA Tournament selection process. One year after it owned the No. 1 ranking for nearly a month, Tennessee will need to go on a major late-season run to have any hope of earning a third straight NCAA bid.

Since getting off to a 7-1 start, Tennessee has gone 5-8. The Vols must turn things around quickly because eight of their last 10 games are against teams in the top 50 of the NET, starting with Tuesday’s trip to Alabama (12-9, 4-4).

“We’ve got to get better and we’ve got to understand you have to play really, really hard basketball for 40 minutes,’’ Barnes said. “When the intensity level of a game goes up, we have to be able to bring that up. That’s one of the hardest things to get younger teams to understand.”

The Vols entered the season with higher expectations even as they replaced All-America forward Grant Williams - taken by the Boston Celtics with the 22nd overall pick in the draft - as well as second-round selections Admiral Schofield and Jordan Bone.

Little did they know how much more roster turnover they'd face.

Plavsic made his first career start Saturday in place of freshman guard Josiah-Jordan James, who has a hip injury that makes his status uncertain for the Alabama game.

Tennessee figured to rely on the senior backcourt duo of Lamonte’ Turner and Jordan Bowden this year, but Turner's season ended in December after shoulder surgery and Bowden has struggled to recapture the 3-point stroke that had been one of his biggest weapons.

Tennessee has received breakthrough seasons of juniors John Fulkerson and Yves Pons, two of the SEC’s most improved players. But the Vols still have plenty of issues.

After winning 31 straight home games, Tennessee has dropped four of its last seven contests at Thompson-Boling Arena. Tennessee has been outrebounded 82-45 over its last two games. Tennessee blew a halftime lead against Mississippi State by allowing 58 second-half points.

The dip in Tennessee’s fortunes comes after an offseason in which Barnes considered leaving for UCLA and instead received a hefty raise. Barnes is earning $4.7 million this season and will get a $250,000 raise each of the next four years.

But in the short term, Tennessee has plenty of work ahead if it wants to be a factor in March.