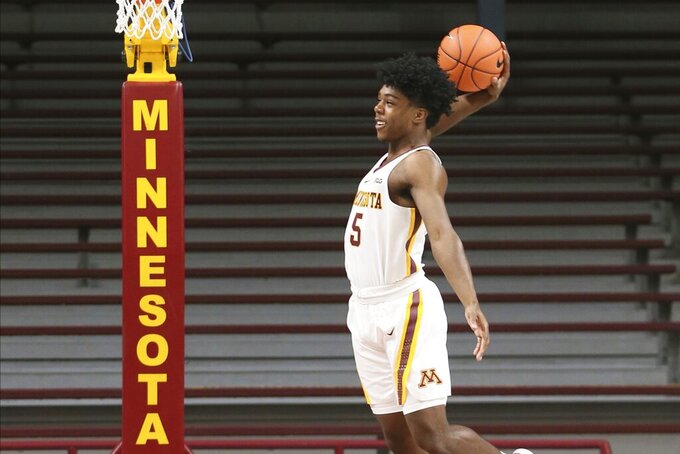 In this Oct. 18, 2019 photo, Minnesota guard Marcus Carr poses for a photo shoot during Minnesota's NCAA college basketball media day in Minneapolis. Carr, who played last season for Pittsburgh, is one of three transfers to Minnesota eligible to play this season as Minnesota must replace its two best players in Jordan Murphy and Amir Coffey. (AP Photo/Jim Mone)

MINNEAPOLIS (AP) — The waiting for Marcus Carr is over. Minnesota's new point guard finally gets to take the court.

"He just wants to play someone different," Gophers teammate Gabe Kalscheur said. "He's been playing us for a while."

When Minnesota hosts Cleveland State on Tuesday night in the season opener, Carr will participate in a game that counts for the first time in 20 months after a year of sitting out following his transfer from Pittsburgh.

As frustrating as that was, not being informed his immediate eligibility was denied by the NCAA until the regular season had begun, Carr tried to make the most of his situation by, well, pretending to be someone else.

"Definitely, the most fun was Carsen Edwards. I got to shoot a whole lot of shots in practice," Carr said.

His assignment with the scout team was usually to emulate the best perimeter player for the upcoming opponent, and the Purdue star who attempted the second-most 3-pointers in the country (380) and led the Big Ten in scoring (24.3 points per game) in 2018-19 was one of Carr's most critical roles. The Gophers beat the Boilermakers twice in March to cement an at-large bid.

"I still had to give my best effort, still had to go hard even though I'm not even playing," Carr said. "If I don't go hard and try to get better, I'm not going to be helping the guys. It just helped me mature a lot."

The native of Toronto was recruited by Minnesota coach Richard Pitino and his staff out of high school, but Carr picked Pittsburgh. He was second on the team in points and minutes as a freshman in 2017-18 for the Panthers, but they finished on a 19-game losing streak that led to the firing of coach Kevin Stallings and prompted his decision to leave.

Because the staff that recruited him to Pittsburgh was dismissed, Carr, Pitino and company believed they had a strong case for a waiver to play for the Gophers right away. Prominent analysts like Jay Bilas and Dick Vitale agreed. The NCAA issued the rejection letter on Nov. 7, the day after Minnesota's first game. Carr's appeal was also denied the following week.

"I tore my ACL in high school so I had a year where I couldn't play, but that's kind of different because I know I physically could play last year," Carr said. "I was physically fine and could very well play basketball, but I wasn't being allowed to so that was definitely a rough time for me."

Putting those feelings on the backburner proved to be the best approach. Carr's attitude made a strong enough impression on the rest of the team that he was voted as a co-captain for 2019-20 with reserve senior forward Michael Hurt.

"I'm a real competitive person, so I like the challenge of knowing that I need people to follow me," Carr said. "I like to be always setting the example and leading guys up there, and I want to be a big part of us winning."

One of seven newcomers this season and one of three expected starters who transferred from other programs, joining guard Peyton Willis (Vanderbilt) and forward Alihan Demir (Drexel), Carr will be counted on as heavily as anyone on the roster. Both Kalscheur and Willis, in separate interviews, described him as a "dog" on the court with the type of confidence and tenacity a young team will need to keep up.

"I've played a lot of good players in the Big Ten, and he's going to be really good," Kalscheur said. "He's got it all."