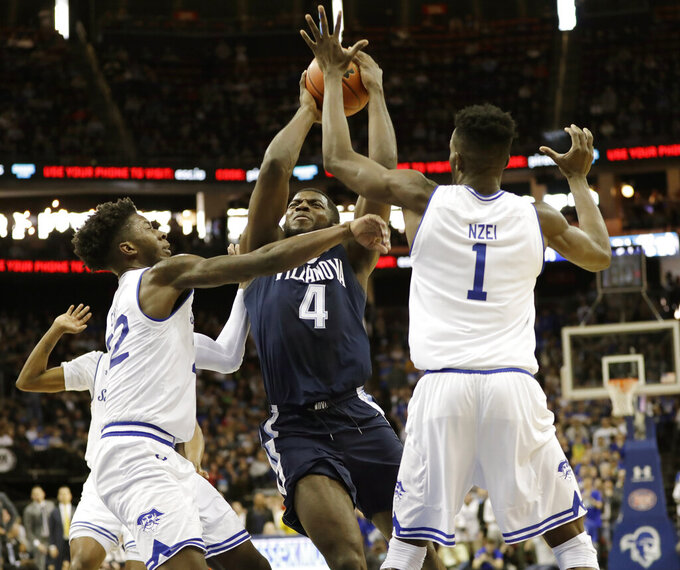 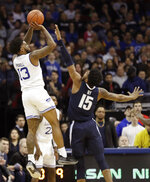 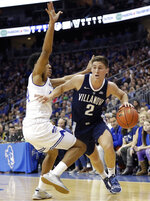 NEWARK, N.J. (AP) — A couple of stunning wins may have put Seton Hall back in the NCAA Tournament, and the last one dforced No. 23 Villanova to wait a couple of hours to win the Big East Conference regular-season title.

"We just beat two ranked teams. We beat Kentucky. We beat Maryland," said Powell, who added seven rebounds, five assists and three steals in more than 36 minutes. "The list goes on. We can play with anybody in the country when we are playing our basketball."

Seton Hall (18-12, 9-9), picked to finish eighth in the 10-team conference in the preseason poll, has exceeded all expectations playing with lone senior Michael Nzei.

Villanova (22-9, 13-5) came into the game needing a win to clinch its fifth outright title in six years. Despite the loss, the Wildcats won the crown and the No. 1 seed in next week's tournament when Georgetown beat No. 16 Marquette 84-85, handing the Golden Eagles their fourth straight loss.

"Seton Hall played really well right from the start, very locked in, very ready to play," said Villanova coach Jay Wright, whose team shared the conference title with Xavier last season. "For whatever reason, a number of little reasons, we just didn't have our guys ready to play at the start. They just jumped us early and it took us until the second half to really get going, which is disappointing.

"But that's what happened, and I was proud of our guys. We actually started competing in the second half and it just wasn't enough."

Jared Rhoden had a career-high 15 points, Sandro Mamukelashvili had 12 and a career-best 18 rebounds for Seton Hall. Nzei added 10 in his final home game.

"Our main focus right now is to win the Big East championship," said Seton Hall coach Kevin Willard, whose team will have a first-round bye.

Collin Gillespie had 22 points and Phil Booth came on late to add 16 for Villanova. Eric Paschall had 14, Saddiq Bey added 13 and Jermaine Samuels 10. The Wildcats, who have won of the last three national titles, didn't get a point from their bench.

"They were playing with great confidence coming off the Marquette game," Wright said of Seton Hall. "They looked really dialed in, just really efficient and we were not. You play a good team like that, you can't play 25 minutes."

This was almost like a tournament game with the Wildcats looking to clinch the regular-season crown and Seton Hall fighting to stay in the hunt for an NCAA berth.

Villanova rallied from a 16-point deficit early in the second half to draw within 66-65 on two free throws by Gillespie with 3:57 to go.

That would be as close as they got as Nzei scored inside and Mamukelashvili hit a follow for a 70-65 lead.

The Wildcats never got closer than three points the rest of the way.

"This feels really good, knowing we accomplished a lot," Cale said of this week. "But we know its unfinished business. We have to do more in the Big East Tournament. We are looking to go to the NCAA Tournament and see what we can do there."

The Pirates led most of the game and it ballooned from a 39-28 halftime lead to 16 points in the opening minutes of the second half. Powell hit two free throws and Cale, who was in a bit of a slump recently, hit a 3-pointer.

Villanova didn't wait long to start its comeback, scoring the next 13 points to draw within 44-41 on two free throws by Paschall.

Over the next eight minutes, the Wildcats whittled to lead down to a point, but that was it.

Villanova: Plays in the Big East Tournament and then goes to NCAA Tournament.

Villanova: After a first-round bye, it plays the opening quarterfinal game at Madison Square Garden at noon on Thursday against either DePaul, Providence or Creighton.

Seton Hall: Will be the No. 3 or No. 4 seed against an opponent to be determined later Saturday.