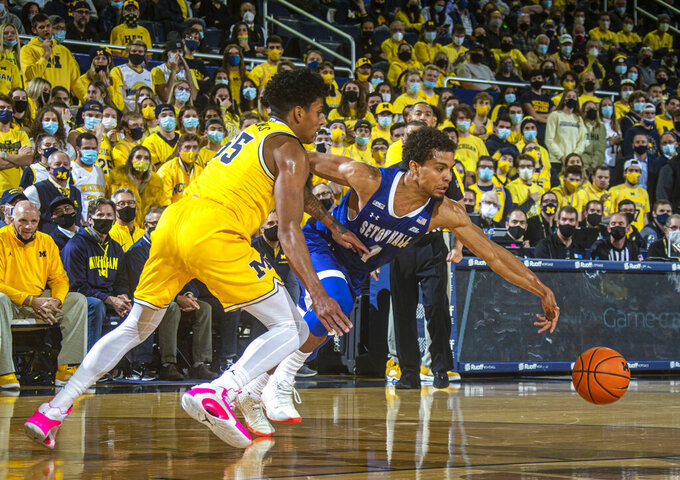 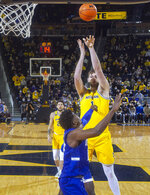 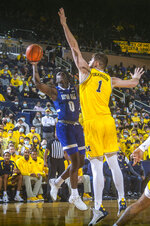 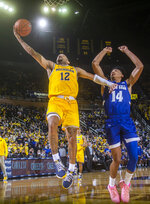 ANN ARBOR, Mich. (AP) — Seton Hall pulled off one of its biggest wins in school history and coach Kevin Willard simply shrugged his shoulders because he was not surprised by the result.

It was Seton Hall's first win on the road over a nonconference team ranked among the top five, and its first victory against a top-five team since knocking off Temple in the second round of the 2000 NCAA Tournament.

“This is where we are as a program," said Willard, who is in his 12th season with the Pirates. “I expected us to win this game. This wasn’t a shock to me.

“We can play anybody in the country and we’ve done that in the last seven years."

Willard led Seton Hall to four straight NCAA Tournament appearances from 2016 to 2019 before the pandemic ended a potentially promising run two years ago and a COVID-19 outbreak stunted his team last season.

The Wolverines (2-1) had a chance to extend the game with 0.8 seconds left, but Terrance Williams missed the first of two free throws.

Unlike the 1989 national championship game in which Rumeal Robinson made free throws to seal a victory for Michigan over Seton Hall, the maize and blue didn't follow the same script.

“I’ve watched the game like five times," Willard said. “It was a phenomenal game. It was like this, a really, really good basketball game."

The Pirates (3-0) trailed by 11 points early in the second half and took the lead with 1:15 left for the first time since late in the first half.

“There were a lot of mistakes made defensively throughout 40 minutes of play," Michigan coach Juwan Howard said.

Bryce Aiken made two free throws with 32 seconds left, giving Seton Hall a 65-64 lead that it kept after Michigan’s Eli Brooks missed a short shot on the ensuing possession.

Myles Cale then made the second of two free throws, giving the visitors a two-point lead that proved to be the difference.

“We made (free throws) and they missed a tough one," Willard said.

Aiken, who was 4 of 6 at the line, and Detroit native Tray Jackson each had 13 points for the Pirates.

Brooks lamented what the Wolverines did offensively late in the game.

“Just taking care of the ball, making sure we get a shot every time down the floor, that’s crucial," he said.

The Wolverines were 3 of 15 on 3-pointers and made just 42% of their shots overall.

“If you hold someone to 68 points in a game, you’re gonna win that game a lot of the times," Brooks said. “We just didn’t do a good job of valuing the basketball.”

Seton Hall: After routing Fairleigh Dickinson and Yale, a team with five graduate players on the roster showed it has the experience and talent to beat one of the best teams in the country.

Michigan: A team that has been openly talking about winning the national championship was humbled, losing a game at home after having a double-digit lead after appearing to pull away early in the second half.

A couple hours before the game, Michigan announced Howard agreed to a five-year extension that keeps him under contract through the 2025-26 season.

Michigan will slip from its lofty ranking and the Pirates will likely earn a spot next week in the AP Top 25.

Seton Hall will face No. 19 Ohio State in the Rocket Mortgage Fort Myers Tip-Off on Monday night. Two days later, the winner will play No. 24 Florida or California for the title.

Michigan plays UNLV on Friday night in Las Vegas as part of the Roman Main Event, which benefits the Coaches vs. Cancer program, and the winner will face Arizona or Wichita State on Sunday night for the championship.