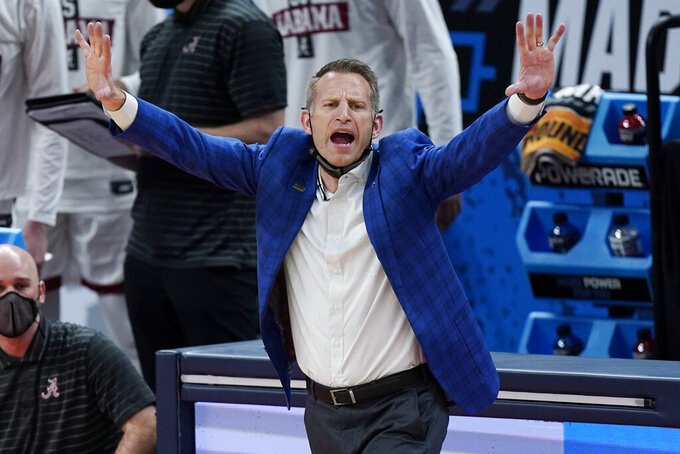 FILE - In this March 22, 2021, file photo, Alabama head coach Nate Oats directs his players during the second half against Maryland in the second round of the NCAA college basketball tournament at Bankers Life Fieldhouse in Indianapolis. (AP Photo/Mark Humphrey, File)

While Alabama must replace the Southeastern Conference player of the year and an NBA draft lottery pick from its best team in decades, coach Nate Oats is hardly starting from scratch.

Oats still enters his third season in Tuscaloosa with the preseason No. 14 team thanks to the return of leading scorers Jaden Shackelford and Jahvon Quinerly.

So the 3-pointers should keep flying with abandon even minus Herb Jones, one-and-done player Josh Primo, sharp shooter John Petty and forwards Jordan Bruner and Alex Reese. The Tide won their first SEC regular season stitle since 2002 and first tournament championship in 30 years on their way to a 26-7 season and the NCAA Tournament’s Sweet Sixteen.

“I think the mindset of the team is in a good spot,” said Oats, who signed a new deal through the 2026-27 season. “They know we’ve got a target on our back. They also know we’ve graduated four seniors and then Primo, who was a lottery pick.”

The cupboard is anything but bare, though last season will be hard to top. And the nonconference schedule is especially challenging. But the team is picked to finish second in the SEC.

Davidson is one of the highest rated recruits to sign with the Tide.

Texas Tech transfer guard Nimari Burnett, one of those McDonald's All-Americans along with Quinerly, will miss the season after right knee surgery.

Oats thinks guard Keon Ellis could be “the best two-way player in this league” after starting the last five games.

Tide fans can expect to see Davidson and Quinerly sharing the court quite a bit, putting two floor generals and scorers on the floor together.

“I anticipate playing those two guys together a lot,” Oats said. “Shoot, to have two creators like them on the floor, it’s going to make it easier for whoever's on the floor with them, including each other.”

“We don’t have many easy games, if any at all,” Oats said. “I think that was by design but I also want to be playing our best basketball come March. I think if you’ve got Cupcake City in November and December you don’t get exposed and you don’t get your weaknesses figured out.”

Alabama still has plenty of firepower from long range after going 348 of 989 in 3-pointers last season, the second-most attempts in SEC history and fourth-most makes.

Quinerly led Alabama in hitting 43.3% of his 3-pointers and Shackelford's 63 makes trailed only Petty.

Shackelford, a two-year starter, explored entering the NBA draft and also spent time in the transfer portal before opting to stay at Alabama.

“We had to convince him that Alabama was the best spot for him to get ready to go play in the NBA,” Oats said. Alabama was one of the few major conference teams that didn't lose a player to the transfer portal.

The addition of 7-foot freshman Charles Bediako and 6-11 Alex Tchikou give the Tide some size around the rim. Tchikou missed last season as a freshman with an Achilles injury. Both were four-star recruits.